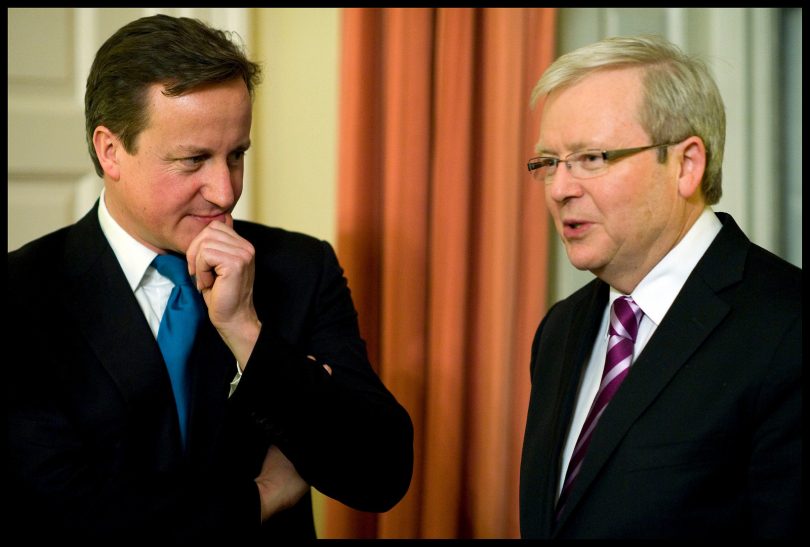 Most readers of this blog have an interest in promoting aid policy change. When considering the ‘big picture’ strategic contours of Australia’s aid program, for example, many readers — around 85 per cent according to recent Development Policy Centre research — would like to see aid spending increased from its current level. And yet, despite the overwhelming consensus regarding the desirability of pursuing this policy objective, differing views prevail about how best to promote it. These disagreements stem from the reality that academics and aid advocates remain poorly equipped to convincingly answer a pivotal question: why does a donor change the trajectory of its aid policy?

In a recently published Development Policy Centre Discussion Paper, I consider this question through the lens of the agenda-setting literature. I find that the lack of political attention typically afforded to aid policy issues fundamentally shapes the ‘rules of the game’ that regulate the politics of aid. This finding has important implications for aid advocacy. Yet before outlining them, it is necessary to describe the link between political attention and policy change.

Politicians, like the rest of us, can only focus on a limited number of issues at once. However, because we elect politicians to oversee how state resources are directed, their decisions about how to allocate their scarce attention become a decisive factor in driving policy change. Consequently, the agenda-setting literature views political attention as the currency of policy change, with variations in the political agenda — “the list of issues that political actors devote their attention [to]” — driving the market.

Politicians are incentivised to pay attention to issues the public deems as important. If their priorities diverge too much from those of their constituents, they can expect punishment at the ballot box. This incentive structure explains why most major policy change is likely to occur via a ‘bottom-up’ process. In response to variations in public attention, political actors will refocus their attention in turn. And provided levels of political attention change substantially enough for long enough, policy change will result.

In the case of aid, however, this bottom-up model of policy change is very unlikely to operate. The low salience of aid means it simply does not generate enough political attention to get on, let alone stay on, the political agenda. (Note the crucial distinction between high levels of public support for aid and the salience of aid, which concerns the importance of aid relative to other issues.) Moreover, the low salience of aid appears to be ‘sticky’. While public opinion on aid can be shifted with appropriately targeted (if often counterintuitive) campaigns, the efforts required [pdf] to shift public perceptions substantially enough to upend the politics of aid are likely to be too onerous to be feasible.

If the ‘rules of the game’ governing the high-level politics of aid prevent bottom-up change, how do instances of aid policy change proceed? Both the theoretical and empirical evidence suggest that, on the rare occasions when an aid policy issue does reach the political agenda, it does so as a result of the concerted efforts of a personally motivated political actor. This actor (or group of actors) dedicates their limited discretionary attention towards achieving a desired policy change, despite the limited political rewards making such an investment offers. If such an actor is sufficiently powerful to ‘get aid on the political agenda’, the low salience of aid works suddenly works in their favour, as the relative lack of public, political, and media attention means these actors will enjoy considerable freedom in pursuing their objectives.

The aid spending expansions that occurred roughly in parallel in Australian and UK during the mid-2000s and into the 2010s hew closely to this ‘top-down’ model. Kevin Rudd and David Cameron dedicated special attention to aid throughout their political careers because they were personally committed to increasing aid spending. Their ability to keep aid policy issues on the political agenda powered high-level policy change. Rudd was key to the dramatic growth of Australia’s aid budget during the second half of the ‘scale-up decade’, while Cameron ensured the UK became the first G8 country to realise the 0.7% target.

If major aid policy change conforms to a top-down model, what are the implications for aid advocacy? Two lessons are especially apparent from the Rudd and Cameron-led episodes. First, if aid policy change is initiated and sustained primarily by political actors, it follows that efforts to promote it should focus on winning the hearts and minds of political actors rather that the public. Project Umubano — the UK Conservative Party’s social action project in Rwanda — was designed with precisely this objective in mind.

Andrew Mitchell established Project Umubano while he was Shadow Secretary of State for International Development, with the conscious objective of fostering a pro-international development policy constituency within the Conservative Party. The three iterations of Umubano undertaken while the Conservatives were in opposition (2007, 2008 and 2009) were especially crucial in functioning as an incubator of Tory interest, awareness and policy engagement in international development issues. When the Conservative Party was returned to government in 2010, in coalition with the Liberal Democrats, almost ten per cent of the Conservative caucus in the House of Commons (30 out of 306) had taken part in Umubano. Moreover, while the Tory right-wing loudly and vigorously objected to the 0.7% target, recent research has found that 62% of 2010-2015 Parliamentary Conservative Party members were aid advocates, a remarkably high number that is surely due in part to the success of Umubano in winning the hearts and minds of politicians.

The second key lesson for aid advocates is to pay attention to political and policy processes rather than electoral ones. Below are three concrete suggestions for what this implies in practice.

The ceaseless demands of political office sap policy creativity. Condoleezza Rice, who served as US Secretary of State (2005-09) under President George W. Bush, has explained how “a policymaker’s intellectual capital stock starts depreciating the moment after taking office” (quoted in Drezner 2017, p. 15). The best time to invest in creating this intellectual stock is before a future leader reaches high office, while they have the bandwidth to seriously grapple with new policy ideas. It is telling that Rudd and Cameron made their defining commitments to aid spending very early in their respective tenures as Opposition Leader. Each used their time in opposition to undertake deep thinking on aid policy, before setting out their policy objectives.

Rudd and Cameron both ‘locked-in’ their aid spending targets (0.5% and 0.7%, respectively) while Opposition Leaders. Prior to becoming Prime Minister, each leader had publicly committed their future governments to aid spending targets and enshrined these commitments in policy and election manifestos. Actions such as these function like locks in a canal, securing the uplift of policy progress and reducing the likelihood that gains would be lost. The passing of legislation committing the UK to spending 0.7% of GNI on aid is a more recent example of an action which locks-in a policy trajectory.

Repeatedly, the continuation of the Australian and UK aid expansions were contingent on the presence of ‘aid advocates’ within the key financial decision making bodies of government. The presence or absence of a single powerful aid advocate can be crucial in the deliberations of these small groups of decision makers. Perhaps the most important decisions taken on a regular basis regarding aid spending in Australia are made by the Expenditure Review Committee (ERC). While Rudd was able to exert influence over the ERC, he ensured aid spending continued to rise. On the other hand, the absence of Julie Bishop from the ERC during the Abbott and Turnbull governments explains a lot about the dramatic post-Rudd aid spending contraction. In the UK context, the same dynamic was at play in the ‘Quad’, which became the four-member inner cabinet of the Cameron-Clegg Coalition Government. On numerous instances, Cameron personally intervened to ‘save’ the 0.7% target, despite opposition from his close colleagues.

These examples reinforce my argument that we should conceptualise high-level aid policy change as the product of a top-down process rather than a bottom-up one. Of course, both models are necessarily reductionist, leaving aside many of the intricacies that inevitably accompany any policy change process. Nonetheless, they neatly capture the essence of how the politics of aid shapes the potential for policy change. In doing so, they reveal why aid advocacy efforts aimed at promoting high-level aid policy change should focus foremost on shaping the views of political actors rather than segments of voters.