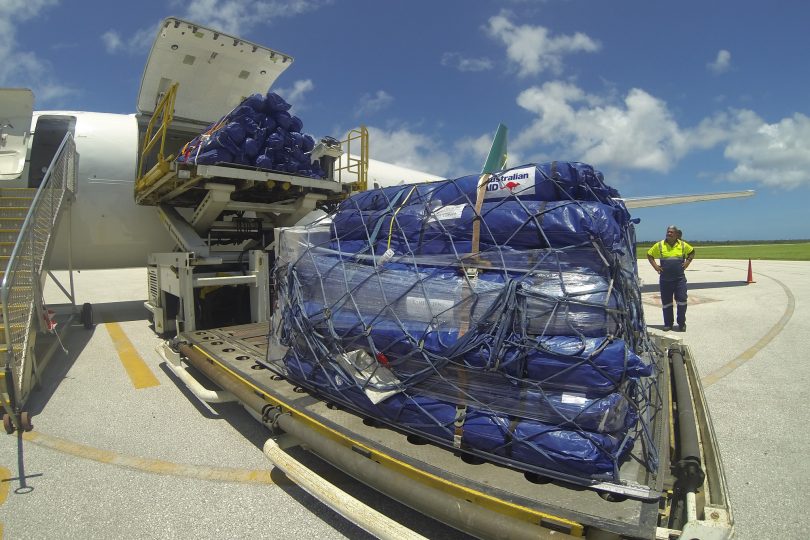 Have you ever wondered just how strange the Australian aid community is? Do we development types think about development issues in the same way as the average Australian does, or are we outliers?

In recent years the Development Policy Centre has been studying the Australian public’s views about aid (see, e.g., here, here, and here). As part of this work, in collaboration with the Campaign for Australian Aid, we placed eight questions in the 2016 Australian Survey of Social Attitudes (AuSSA), a large, representative survey of Australian adults. As we did this, we also posed the same questions to the Australian aid community via this blog (not a random sample, but our analysis suggests no obvious biases have skewed the results).

We asked both groups about:

We also asked a series of questions on development more broadly, including:

We saw the biggest diversion between the public and the Australian aid community’s views on the question of whether Australia gives the right amount of aid or not. While the 2016 AuSSA survey findings are more or less in line with prior public opinion surveys, members of the aid community overwhelmingly (and unsurprisingly) believe that Australia does not give enough aid (Figure 1). 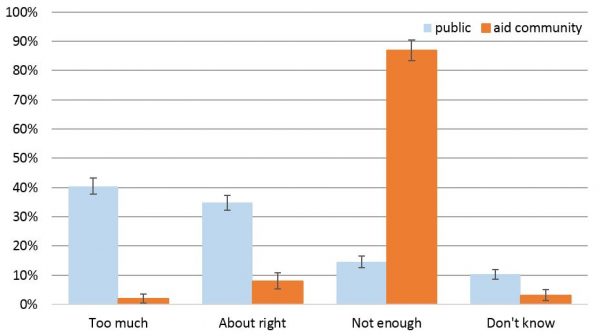 Error bars on all figures in this post indicate 95% confidence intervals. The exact wording of all questions and response choices can be found in the full report. 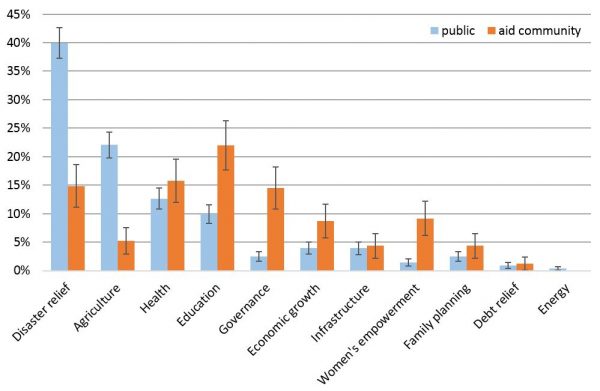 While the aid community appears to have diverse preferences, the public has an affinity for more traditional aid spending areas – foremost disaster relief, and to a lesser extent agriculture, health and education. This likely reflects a traditional public perception of what constitutes ‘aid’, with a strong focus on humanitarian assistance. While the public and the aid community are similarly supportive of health, there are striking differences in education, economic development, governance, and women’s empowerment. The very low levels of public support for the latter two is particularly concerning given their importance.

A perennial debate revolves around the question of whether aid works or not. Figure 3 shows the extent to which our respondents believe that aid helps people living in developing countries. While members of the aid community are far more likely than members of the public to believe that aid makes a big difference in the lives of the poor, it is interesting that the majority in both respondent categories take a moderate view, believing that aid improves the lives of people in developing countries, but only a bit. 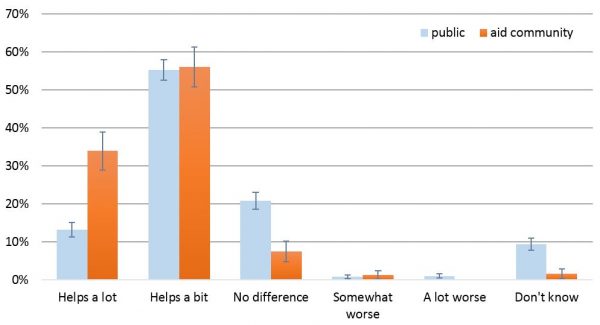 While the headline findings between the public and aid community are similar, we think it’s likely that the underlying reasons for their views differ. Members of the public may be influenced by their perceptions of other brakes on development, such as the role of corruption (a topic we discuss below). By contrast, the aid community’s qualified opinion on the effectiveness of aid may be coloured by their more detailed understanding of how aid works in practice and various constraints (logistical, political, etc.) that may limit aid effectiveness. Alternatively, their perception of aid effectiveness might also be tempered by their greater appreciation of the relatively small volume of aid per capita that flows to developing countries, as compared to, e.g., income from remittances.

The role of corruption

Fortunately, the results of the 2016 AuSSA survey suggest that the Australian public holds a more moderate view (Figure 4). While a significant proportion of the public believe that corruption is the sole or main cause of poverty in developing countries, the plurality believe that corruption is only part of the reason why poor countries remain poor. Similarly, the majority of aid community respondents believe corruption is part of the cause of poverty, with most of the remainder thinking corruption plays a minor role. 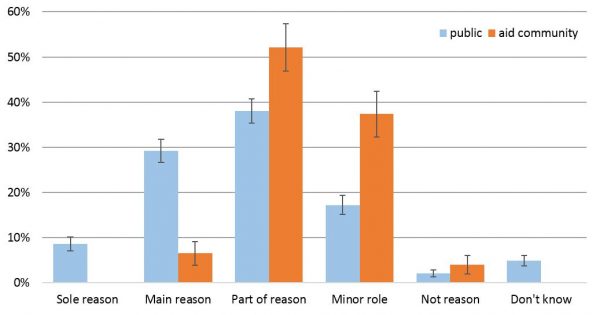 When it comes to beliefs about aid and development, the Australian aid community and the Australian public are not polar opposites. There are common views and there are also differences which are only differences of degree. And yet, the two groups that we surveyed are not one and the same. Advocacy arguments cannot safely be assumed to be effective among the general public just because they make sense to us.

Terence Wood is a Research Fellow and Camilla Burkot a Research Officer at the Development Policy Centre. Special thanks to those Devpolicy Blog readers who filled out and shared the link to the aid community survey. Download the full report here.