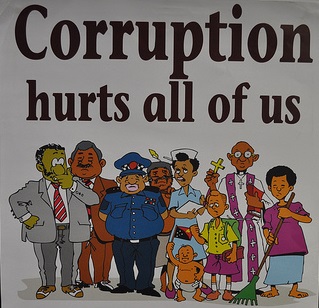 Anticorruption posters and billboards are common sights around the world. Most anticorruption programs now include an awareness-raising element. The hope is that anticorruption messages – whether shared via posters, radio or TV, for example – will inspire citizens to refuse to pay bribes and to report any corruption they encounter.

But there is so far little evidence available to tell us how effective these messages are. Some scholars have argued that they might even backfire and discourage the reporting of corruption. Could such messages simply prompt people to recall preconceived views that corruption is a widespread, insurmountable problem?

The context in PNG is particularly difficult for anticorruption policymakers, as a recent study by my co-researcher Grant Walton confirmed.

For a start, its citizens have many different definitions of what ‘corrupt’ means. So, even if anticorruption awareness-raising is effective, the risk is that the ‘corrupt’ acts that Papua New Guineans focus on may not necessarily be those – such as bribery or fraud – that anticorruption campaigners hope to target.

Together we recently also looked at PNG citizens’ willingness to report corruption. Using 2010-2011 household survey data and quantitative analysis, we asked which factors influenced willingness to report several different types of corrupt acts, and to what extent. A key finding was that citizens were less likely to be willing to report corruption if they lacked trust that the authorities would take action as a result. This suggests that in PNG an awareness-raising approach may have little effect. In the 2010-11 household survey, 38% of the 1,825 respondents agreed with the statement, ‘There is no point in reporting corruption because nothing useful will be done about it.’

Our new study in PNG will be informed by my most recent findings from a pilot study in Indonesia. This set out to explore whether different anticorruption messages influence people’s views about corruption and about anticorruption efforts.

From a survey sample of 1,500 households in Jakarta, respondents were randomly assigned to five groups. Four groups were each asked to read a different awareness-raising message on corruption while the fifth, the control group, were not given a message. All respondents then answered the same set of questions.

Two messages were positive: one described government successes in fighting corruption and another emphasised how easily ordinary citizens could report and get involved in the fight against corruption. The other two messages were more negative: they focused on high-profile grand corruption scandals and on statistics about widespread petty corruption in Indonesia.

Initial analysis shows that the messages were quite influential – but not in the way we might expect.  It made little difference whether individuals were exposed to positive or negative messages. All the messages heightened respondents’ worries about how much damage corruption was doing to development in Indonesia. They reduced respondents’ pride in the government’s efforts to fight corruption and, perhaps most importantly, reduced their belief that ordinary citizens could easily join the fight against corruption.

It seems so far, then, that any message about corruption or anticorruption might reduce citizens’ sense of being able to help tackle corruption. Why might that be the case?

One possible explanation is that, as a number of scholars have highlighted, people may discount information that does not fit with views they have already formed. So if people already see corruption as an insurmountable problem, even a ‘positive’ anticorruption message may simply prompt them to recall their existing negative perception.

Our new study in PNG will investigate this potential risk further. It will be based on a survey sample of 1,000 household respondents in Port Moresby. As in Jakarta, we will split the sample of participants into five groups and put each through a similar process, though the messages about corruption and anticorruption will be tailored specifically to PNG. For instance, they will take into account contextual issues such as the importance of religious faith and PNG’s ethnic diversity.

We hope that analysis of the responses will offer practical assistance to anticorruption work in PNG, particularly in the problematical area of how to draft messages that encourage citizens to fight corruption. If, however, we find that anticorruption messages prove to have no impact or to backfire, then campaigners and policymakers will at least know that resources earmarked for awareness raising could be redirected.

Caryn Peiffer is a Research Fellow with the Developmental Leadership Programme (DLP).

This post is republished with permission from the DLP Blog. Read more in this 3-page brief on the potential implications for PNG and in the author’s new DLP paper on findings from Jakarta.