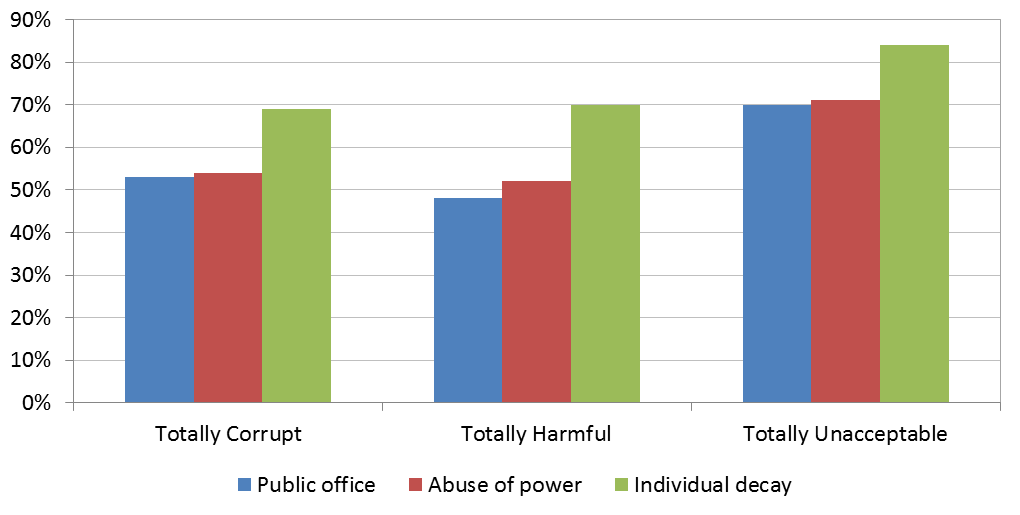 It is widely recognised that, to be effective, the fight against corruption needs to engage citizens. Donors, NGOs and others working to fight corruption recognise this by funding efforts to empower the grassroots. But, as I (here) and others (here and here [pay-walled]) have shown, citizens in developing countries often have very different understandings about corruption to anti-corruption actors. Which raises the question: How can we start to theorise about the ways citizens think about corruption?

One way is to look at the way the term is defined.

In an article published in the most recent edition of the Journal of Development Studies, I develop a framework that categorises the ways corruption can be defined; I apply this framework to findings from focus group discussions (see details here) and a nine-province household survey conducted in PNG (see details here).

The framework I develop outlines three key ways that corruption is defined in the literature. First, corruption is defined as the ‘abuse of public office for private gain’. This definition focuses on acts of corruption that involve at least one public servant, and suggests that when the public and private spheres mix corruption ensues. As the most popular definition in academia and within the development industry, it frames anti-corruption policies and programs as well as research into corruption.

Acknowledging the increasing role that non-state actors play in corruption, a second definition has risen in popularity: ‘the abuse of entrusted power for private gain’. By focusing on ‘abuse of entrusted power’ rather than ‘public office’, this definition allows corruption to include improper business-to-business activity within the private sector and civil society. Despite its popularity this definition has done little to shape anti-corruption programs: most focus primarily if not exclusively on government corruption. Nor has it had much influence on the study of corruption, with anti-corruption instruments mostly focusing on the different ways in which the state is corrupt – although Transparency International’s infrequent Bribe Payers Index is a notable exception.

The third way corruption is defined relates the concept to a form of individual or institutional decay. Individual decay is apparent in Ancient Greek conceptions of the term. Peter Bratsis (see PDF here) notes that the term diaphtheirein, the Greek equivalent for the word bribery, referred to: ‘the corruption of the mind by which the ability to make sound judgments and pursue the good has been impaired’ (2003: 12). Institutional decay is apparent in Machiavelli, who associated the term corruption (corruzione) to the deterioration of the quality of government, regardless of the reasons; it is also apparent in the writings of other republican theorists, such as Quentin Skinner, and more recently Mlada Bukovansky.

However, when we asked Papua New Guineans what they thought about corruption (korapsen in Tok Pisin) in focus groups, the decay definition featured prominently. Examples of individual decay included lying, gossip, prostitution, womanising, making and drinking homebrew and other morally dubious activities involving citizens (not necessarily someone in an entrusted position of power). Examples of institutional decay included poor government standards in Southern Highlands province, and the wantok system benefiting particular individuals more than the community as a whole.

Respondents also associated corruption with people in positions of power. Reflecting the public office definition, one male respondent from Madang said corruption included public officials ‘breaking government law, [government] leaders misleading people, and public servants misusing government vehicles’. Responses also mirrored the abuse of power definition. For a young man in Madang, corruption was about ‘businessmen thinking of making profits’. Non-profit organisations, like the church, were also seen to engage in corruption. In East New Britain, a few respondents suggested, in hushed tones, that embezzlement of church funds by the local clergy was an example of corruption.

The popularity of each of these definitions was captured by the nine-province survey.  Respondents were asked to evaluate nine scenarios that depicted possible corruption, in terms of the degree to which each was corrupt, unacceptable and harmful. The scenarios were categorised by the definition that they represented and then compared. Figure 1 below shows that the public office and abuse of power definitions were considered similarly corrupt, harmful and unacceptable. The scenario representing the individual decay definition, on the other hand, was considered far more unpalatable

Figure 1: Comparison of responses of ‘totally corrupt’, ‘totally harmful’ and ‘unacceptable’ by definition

These differences are, in part, due to respondents’ understandings of and experience with the state. In urban locations, where the state is relatively strong, the rules and laws of the state are more likely to be known. In rural locations, where the state is weak, the activities of non-state actors are more likely to be of concern – it is here where churches, logging and mining companies, and communities themselves provide development. Men and those with higher levels of education are more likely to understand the laws and rules of the state, and participate in politics, shaping their view of corruption into something more normative.

In areas where non-state actors are more active than the state, broader definitions of corruption are important for understanding local concerns, and identifying the types of corruption that are likely to prevail. Understanding this is important for anti-corruption efforts. While more research is needed (particularly around the decay definition), these findings suggest that if anti-corruption actors only focus on state representatives, then they misunderstand the nature of corruption, where it emanates from and who is actually involved in the eyes of local people. This could undermine local support for anti-corruption initiatives, particularly where the state is at its weakest.

Grant Walton is a Research Fellow with the Development Policy Centre.