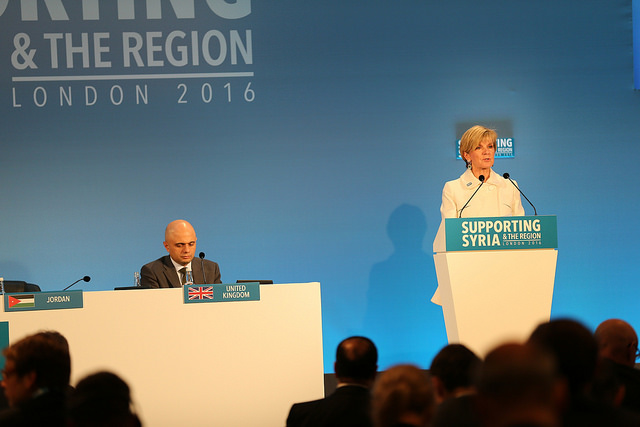 Five years in, and despite a ceasefire largely holding, people are still dying in the Syrian conflict. To assess what wealthy countries are doing to help ameliorate this ongoing catastrophe, Oxfam measures these countries’ financial and refugee intake contributions in their regular ‘Fair Share Analysis’ [pdf]. (See here for a 2014 antipodean summary.) The latest Fair Share Analysis was issued in the lead-up to the ‘Supporting Syria and the Region’ donor conference in London last month, where US$11 billion was pledged (US$5.9 billion for 2016 and US$5.4 billion for the years 2017-2020). What did Australia and New Zealand do in 2015 to contribute their fair share? And how can they lift their game in 2016?

Australia started the year with a pledge for more, although it was roundly criticised: US$14.2 million was offered at the London Conference (with an extra US$4 million for Iraqi Internally Displaced Persons). Foreign Minister Bishop also announced an uncosted multi-year assistance package to Jordan and Lebanon – an important contribution I commented on earlier here. New Zealand pledged nothing.

The other measure Oxfam uses to assess wealthy countries’ contributions is their registered Syrian refugee intake. Australia continues to do well on this front,  pledging places for 11,124 registered Syrian refugees since 2013 against a calculated fair share of 10,100 places. This is 110 per cent of Australia’s fair share. However, before celebrating this achievement, note that as of February this year, at least one journalist reported only 20 Syrian refugees had actually arrived in Australia since last September’s pledge. To be applauded, pledges have to be actioned.

In the face of public pressure, New Zealand also announced in September 2015 an emergency intake of Syrian refugees. The New Zealand figures are not clear-cut, and with an assumption that pledges will morph into actual intakes by the end of 2016, Oxfam calculated that New Zealand pledged 500 places for Syrian refugees. This is just 37 per cent of New Zealand’s fair share of 1,357 places. On the positive side, New Zealand has sprung into action converting promises into practice, with approximately 82 Syrian refugees already in New Zealand, and more to arrive in March and May.

In comparison with other countries, in terms of funding, Australia and New Zealand sit in the bottom 15 of the 32 countries assessed, with New Zealand third from the bottom. For refugee intake, 19 out of 28 countries keep New Zealand company amongst the countries that have offered less than 50 per cent of their fair share. Australia is a stand-out in the top four.

As UN Secretary-General Ban Ki-moon stated recently, “the international community bears a heavy responsibility for failing to end” the war. The numbers of dead and displaced have been repeated often enough. The conflict has set Syria’s development back 40 years and life expectancy 13 years. People fleeing their homes in search of safety embody the largest displacement crisis anywhere on earth. Australia and New Zealand both count themselves as part of the international community, and therefore must do more to contribute their fair share.

The poor New Zealand contribution is particularly disappointing, due to New Zealand’s seat on the UN Security Council. In September 2014 Foreign Affairs Minister McCully stated [pdf] to the United Nations General Assembly that, “[n]ow it is time for action. We need to find a way to … address the humanitarian tragedy and to help the people of Syria and Iraq…”. On the Security Council New Zealand is doing important diplomatic work on Syrian humanitarian issues with Jordan and Spain (building on Australia’s prior engagement when on the Security Council 2013-2014, commented on here). And in a fora where words count, New Zealand is arguing frankly for greater political action (for example, here). Syrian humanitarian issues are extraordinarily complex, seeing New Zealand grappling with questions such as, “How can we access besieged areas to ascertain the severity of the situation and ensure there is an appropriate humanitarian response?” and “How can the council make the lives of the people living this tragedy more bearable?” (MFAT Secretary, Brook Barrington, NZ International Review, Vol. 40, No. 5, p. 4, paywalled).

Yet New Zealand’s miserly refugee intake and financial contribution to the Syrian crisis are in stark contradiction with its words to encourage other countries and parties to help people in need, halt the bombs and find a path towards peace. When addressing the United Nations General Assembly in September 2014, during New Zealand’s campaign for a temporary Security Council seat, Minister McCully assured world leaders that “if we are elected, New Zealand will be a credible, positive influence on the Security Council”. To do this, and to give greater traction to its diplomatic work on Syria, New Zealand needs to give its fair share to help.

Australia and New Zealand can both contribute more. It is simply a matter of political will. The two governments’ contributions thus far are inadequate and do nothing to advance the global reputations of two countries that like to think they are good global citizens.