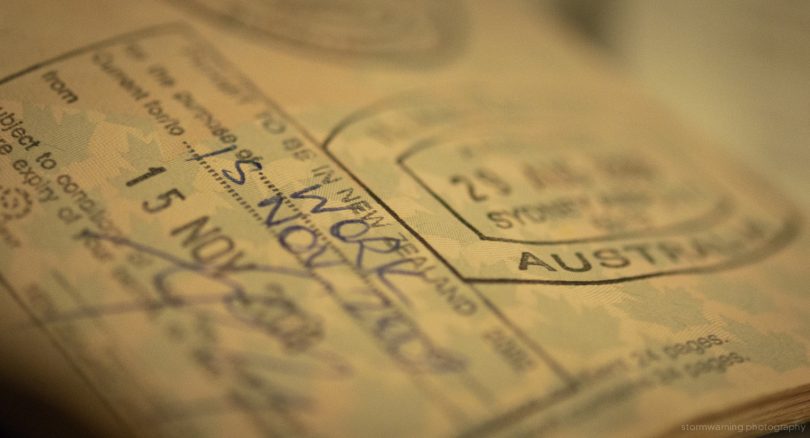 For Australia, though not yet for New Zealand, we have much more detailed information on the distribution of workers by the number of visits. This data can be used to answer this question: how many visits will an average seasonal worker make to Australia? This is an important question because there is a suspicion that too many Pacific islanders are making a career out of seasonal work, and that what was meant to be a temporary migration program is becoming, de facto, a permanent one.

The graph below provides the basic data, showing the shares of workers coming each year for the first, second, third time and so on. Not surprisingly, the proportion on their first visa is falling, as the number of experienced workers to choose from grows. The proportion on the second and third visa are constant (at around 25% and 12% respectively), and then the number on three or more visas is growing, but slowly.

The share of first-time, second-time etc workers under the SWP 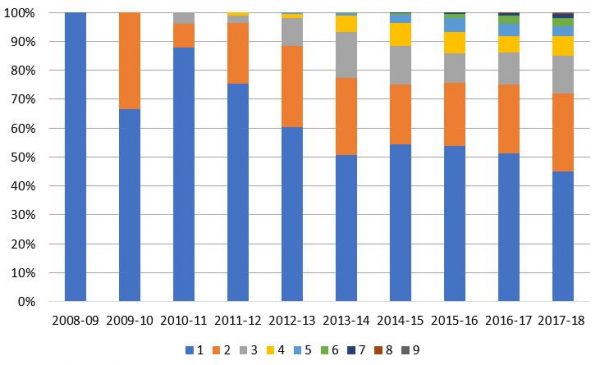 We can use this data to calculate the probability that workers who visit one year will return in the future. I estimate this for each year by asking: how many workers with one (or two, etc) seasonal work visa have that year obtained a second (or third, etc)? These return probabilities are shown in the figure below. I’ve deleted data where less than 30 workers are in a particular visa return category, as the numbers then are too small to generalise from.

Return probabilities for the SWP 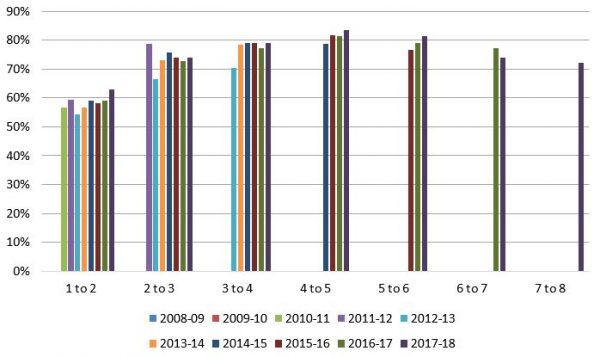 From this we can calculate drop-out rates: the proportion of workers who drop out after one visit, or two visits, or three, or more. There are a small number of workers who will make many return visits. But just over half of workers have dropped out before three visits, three-quarters before six, and nine-tenths before eight. 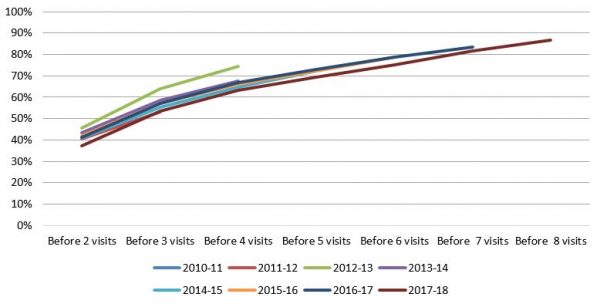 Finally, we can also use the return probabilities to predict the expected number of times any seasonal worker will visit Australia. To do this, I assume that the return rates remains constant from the final year we have data for to the final year for which visits are possible (theoretically, 25 visits are the maximum, given the age limits from 20 to 45).

Estimates from the last four years of data are shown below. While each successive year should give a more accurate prediction than the earlier one (since it is based on more years of data), the estimates are, encouragingly, quite consistent at around 3.6 years. That’s our estimate of how many times we would expect a seasonal worker on average to visit under the scheme.

Pacific islanders are not making a career out of seasonal work. On average, we can expect them to participate in the SWP for fewer than four seasons.

Based on averages over the four years, 40% of seasonal workers can be expected to visit only once; 37% two to five times; 17% six to ten times; and only 6% more than ten times. We will be able to firm up these estimates over time, but they definitely show that very few seasonal workers are making a career out of it.

Why don’t Pacific workers return more often? After all, surveys show that they enjoy the experience, and that they want to return. If they misbehave or are not productive enough they might not be invited back. Or they might choose not to come back due to family obligations, or because they have met their income target. Or their employer might reduce their demand for labour or drop out of the scheme altogether.

I don’t know what the “right” number of return trips is. But three to four seems to be a very reasonable outcome for the SWP. It is enough time for employers to get the benefits of having experienced workers, but not long enough for a small group of workers to monopolise the scheme at the expense of the broader population.

Data, definitions, method and calculations available here. The earlier two blogs on the subject of return workers, here and here.