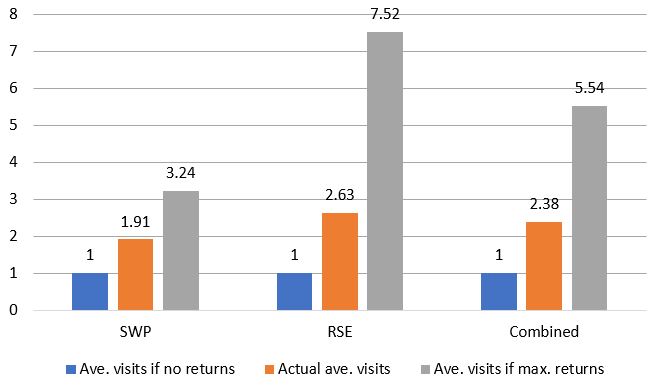 There are concerns about the propensity of seasonal workers to return to Australia (under the Seasonal Worker Programme or SWP) and New Zealand (under the Recognised Seasonal Employer scheme or RSE) year after year. A World Bank survey of SWP workers argues that “most participating workers are in the Programme for long-term employment.” Employer surveys show the preference of employers for return workers. Sending-country governments are worried that there will be few opportunities for new workers to enter the schemes, and limited incentive for workers to invest domestically if they keep returning. Vanuatu is reported to be considering “a proposal to limit the number of times that workers can return to Australia or New Zealand.”

But how prevalent is this reliance on return workers? Analysis so far has been based on data around employer and employee preferences rather than on how many times workers actually return. The analysis I have carried out, and which I report below, shows a very different story.

Consider two extreme scenarios, one in which return visits are banned, and one in which new workers are hired only when the scheme is expanded. I show that both the SWP and the RSE are more like the former (no reliance on return workers) than the latter (maximum reliance on return workers). Moreover, what reliance there is on return workers is stable rather than rising. What already seems to have emerged is a benign pattern in which employers get the benefits of being able to hire workers with experience, and Pacific countries are still able to share the benefits of seasonal work around.

The bottom line is that sending governments should refrain from putting limits on the number of times workers can go on seasonal work. There is just no need for limits on return workers, and they will become simply one more complication in what is already a complex scheme.

The analysis that supports this conclusion is split up over two posts (second post here). Let’s dive in.

It is certainly true that there is a big difference between seasonal worker visits and seasonal workers. There have been about 27,400 SWP visits so far (up to June 2018) to Australia, shared among some 14,300 individuals. The average SWP worker has made almost two visits (1.9 to be exact).

It is not hard to explain the preference of employers for return workers. It makes sense to weed out the bad workers in the first year, and invite the good ones back. But it would be wrong to conclude that the reliance on return workers is excessive. In fact, the numbers indicate that participation in seasonal work is much broader than would be the case if it was simply a matter of the same workers returning year after year.

The number of visits is considerably greater than the number of workers, but worker numbers under the SWP are nevertheless much greater than they would be if return work opportunities were maximised. We can compare the actual number of visits per worker with the average as it would be if (a) return visits were banned and (b) maximum reliance was placed on return workers. In the first scenario, there would be as many workers as visits. In the second scenario, new workers would only be added as the scheme expanded. Based on the latest data, the average RSE or SWP (“combined”) worker has made 2.4 visits. That is not that many for schemes that have been operating for a decade. If return opportunities were maximised, the average worker would have made as many as 5.5 visits. From this perspective, we are much closer to a scenario in which return visits are banned than one in which reliance on return workers is maximised. 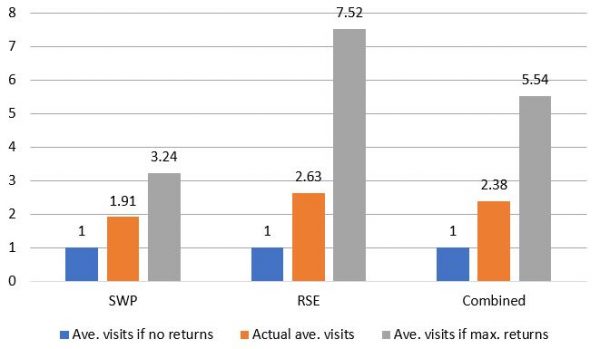 It is interesting to look at the visit/worker ratio over time. Of course it is going up over time, but surprisingly slowly, by only about one month per year. It took the NZ average number of visits per worker five years to go from one to two. In the next four years, it only increased from two to 2.6.

Average visits per worker over time in Australia, New Zealand and combined 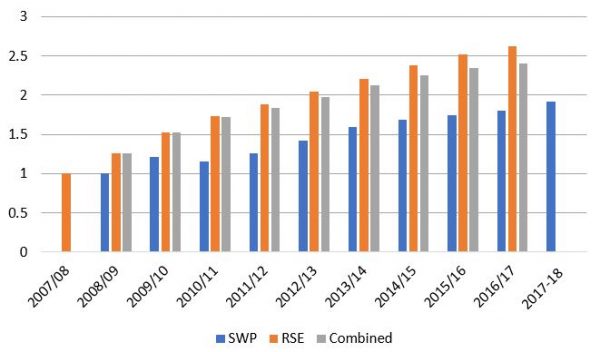 The second post in this two-part series provides further analysis of the reliance of return workers in Australia’s and New Zealand’s seasonal worker schemes.

Notes: The NZ RSE started in 2007-08, and data goes to 2016-17. The Australian SWP started in 2008-09 and data goes to April 2017-18. Combined results are shown only for years for which the schemes were operational in and for which we have data for both NZ and Australia. Data is from the Australian and New Zealand governments. Data and calculations available with the second post. See also this blog.