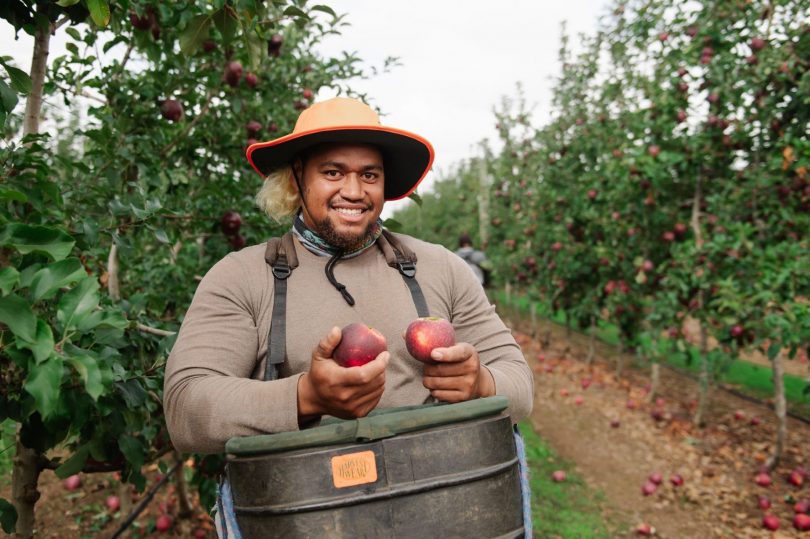 The promotion of Pacific labour mobility has widespread, bipartisan support in Australia these days, but it wasn’t always so. When a seasonal worker program for the Pacific was first being considered, it met with some stiff opposition. One of the arguments against the scheme was that it would be a bandaid. “The impact on the Pacific would be negligible” argued Helen Hughes and Gaurav Sodhi in 2006.

In the end, those opposed to these schemes lost out. First New Zealand in 2006, and then Australia in 2008, introduced seasonal work schemes for Pacific Islanders, and Australia introduced the Pacific Labour Scheme (PLS) just over a decade later in 2018. Some 15 years on, what has been their impact?

We estimate that, as of the middle of 2022, there were 34,400 Pacific workers onshore in either Australia or New Zealand on one of the three Pacific temporary programs: Australia’s Seasonal Worker Programme (SWP) and the longer term PLS, and New Zealand’s Recognised Seasonal Employer (RSE) program, its SWP equivalent.

Of the 34,400 workers, a third are from Vanuatu, 22% are from Samoa and 15% are from Tonga. Another about 10% come from each of Solomon Islands and Fiji. Timor-Leste has 5%, and the remaining 5% is shared between PNG, Kiribati, Tuvalu and Nauru. 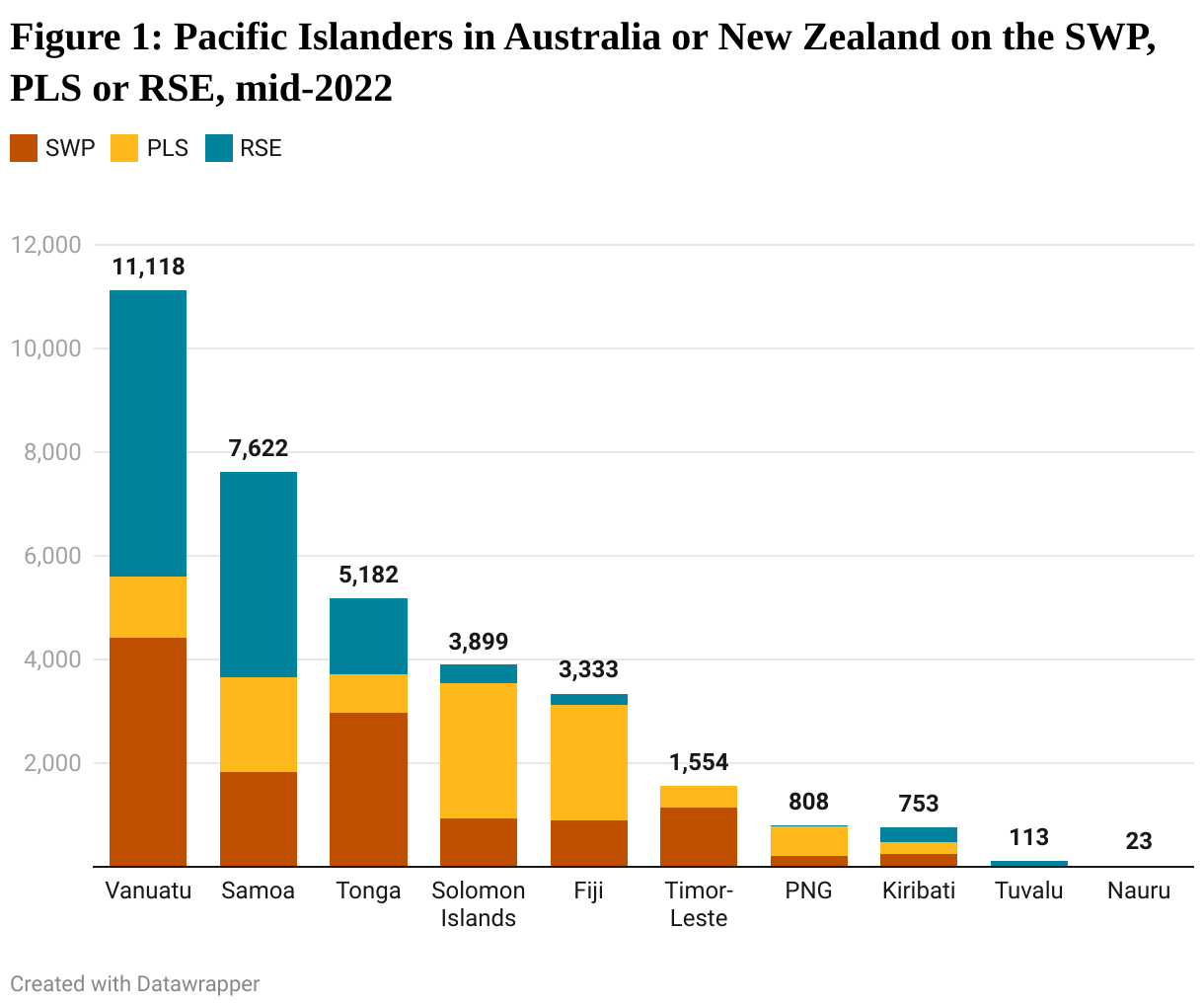 To gauge the impact of these programs, we need to divide these numbers by the working age population of the sending countries (which we define as those aged 20 to 59). Because there is a large gender imbalance in the programs, we do this separately for men and women.

The next figure shows the results by men. There are three countries where more than 10% of the male working age population is engaged on one of the three programs. In Tonga, it is almost one in five (18%), and in Samoa and Vanuatu it is 14% each. After that, the ratios are much smaller: 3% and below.

For women, the ratios are all below 3% except for Tonga. Only for the same three countries of Tonga, Vanuatu and Samoa does the ratio exceed 1%, and it almost reaches 4% in Tonga.

There is a fairly obvious conclusion from this. The impacts of the schemes are gender-specific, but the temporary schemes have been extremely impactful in the male labour markets in the three Pacific countries of Tonga, Samoa and Vanuatu, and much less so elsewhere.

For the big three sending countries, we can compare the temporary employment gained in Australia and New Zealand with government employment at home. In all these countries, the government is the biggest employer. But in all three, about as many citizens are now working overseas on one of the three schemes as are working for government. Put crudely, for Samoa, Tonga and Vanuatu, introducing these temporary work schemes has been akin to doubling the number of government employees. That’s huge. 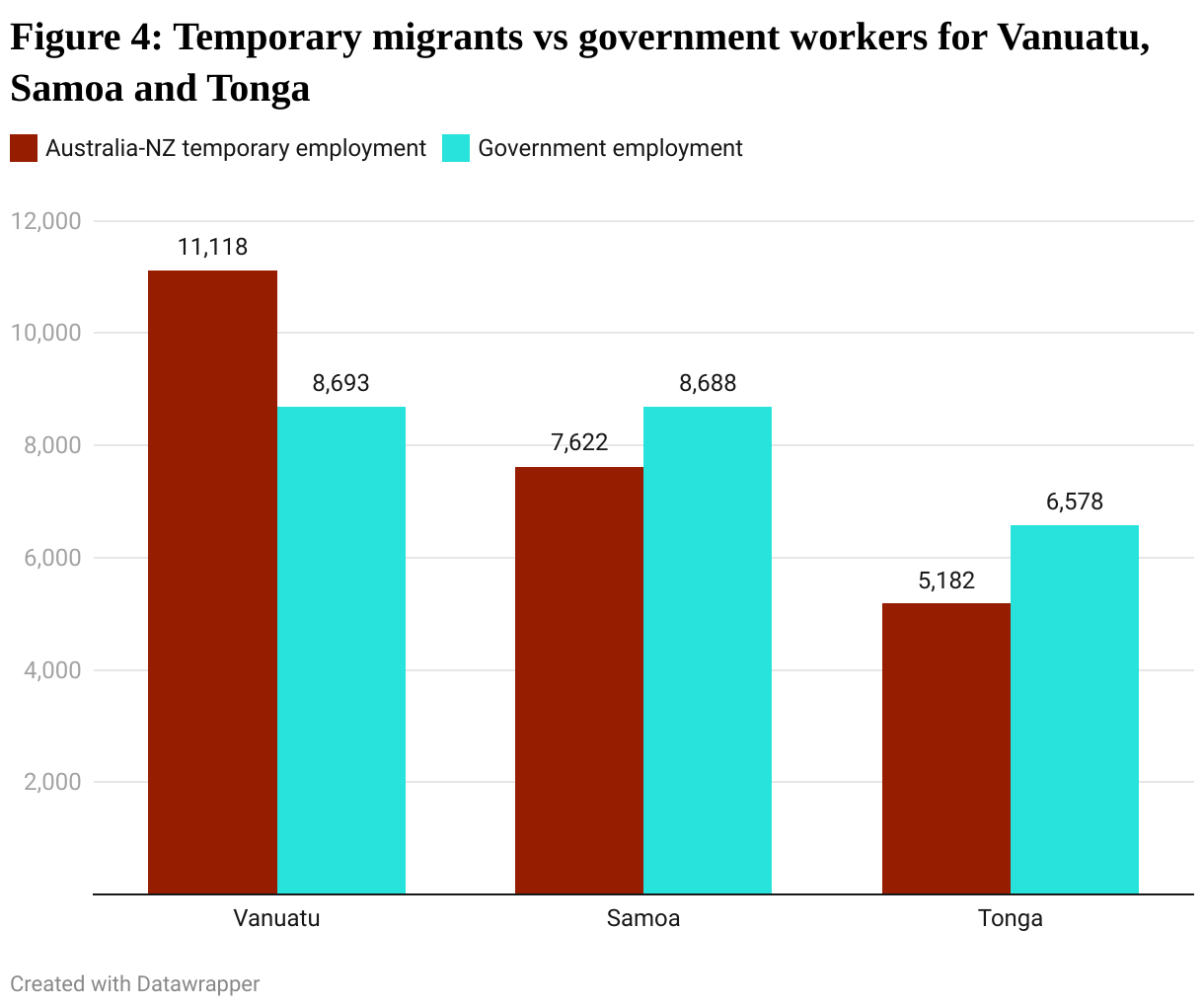 The Hughes-Sodhi critique clearly does, however, apply to the sending countries of PNG and Timor-Leste where participation rates are virtually zero. Of course these are much bigger countries, but, ironically, they have also sent far fewer workers. While these larger countries will never hit the migrants-to-population ratios seen in the successful and much smaller countries of Tonga, Samoa and Vanuatu, they should be able to match them at least in absolute terms of numbers of workers employed.

These very different results follow from the facts that all three schemes are demand-driven, and that employers have mainly decided to recruit from a subset of countries in the Pacific and Timor-Leste. This has been unfortunate from a development perspective, as it has meant that some of the countries that need labour mobility the most – PNG and Timor-Leste but also to a large extent Solomon Islands – have missed out on the job opportunities.

Introducing country quotas for the Pacific temporary schemes would be one response, but this greatly risks deterring employers from using these schemes at all. Instead of country quotas, both the Australian and New Zealand governments could do more to increase hiring from the underrepresented countries – and Australian employers have recently indicated their support for this. Timor-Leste isn’t even a participant in the RSE. The New Zealand scheme is capped, and a review recommended that if employers want to recruit more workers then they should have to recruit from under-represented countries. (Though not the topic of this blog, more also clearly needs to be done to improve the gender balance of the programs.)

We also need to look beyond temporary migration options. One of the strengths of the new Pacific Engagement Visa (PEV) (the Labor government’s new permanent migration scheme for the Pacific) is that it will have country quotas so that it can be directed precisely to those countries that need it. With a pro rata distribution of visas planned, PNG should be by far the biggest beneficiary of the PEV, and Timor-Leste should be the second biggest.

Returning to the Hughes-Sodhi claim, their prediction of a “negligible impact” was too pessimistic. In three Pacific countries – Tonga, Samoa and Vanuatu – labour mobility has had an impact of the sort that foreign aid could never hope to have – and all to the benefit of the Australian economy as well.

However, the Hughes-Sodhi claim does stand for a number of Pacific countries, and reminds us of the distance still to be travelled. Labour mobility has had a transformational impact in some Pacific countries over the last 15 years, but in others there is still a long way to go.

Pacific Labour Scheme: The number of PLS visas granted by gender over the last three years, representing the maximum possible number of workers in Australia. Data provided by the Pacific Labour Facility. Includes all workers up to 30/06/22.

Gender estimate for onshore SWP and 408 visa holders: calculated based on SWP % approvals by gender per country over the last three financial years (2019-20, 2020-21, 2021-22). This combined ratio was applied to total 403 SWP visa holders and 408 visa holders in country. SWP approvals data by country and gender provided by the Department of Employment and Workplace Relations.

Exclusions from workers onshore: All workers currently holding bridging visas (either waiting for a 408 visa to be approved, or having lodged a protection claim) are excluded from this analysis.

Government staff numbers: For the comparisons with government staff, census data are used for Tonga (2016) and Vanuatu (2020) and National Provident Fund data for Samoa (2021). Workers in the following sectors are assumed to be working for government: public administration, education, health, water and electricity.