This week Australia’s Minister for Foreign Affairs, Julie Bishop, announced that Australia will commit $200 million over three years (2014-16) to support the Global Fund to Fight AIDS, Tuberculosis and Malaria as a part of its fourth replenishment round currently underway. This is the same amount that Australia contributed over the last three years.

Overall, the Global Fund went in to the replenishment with a target of $15 billion, and came out of the just-concluded Washington DC gathering with an outcome of $12 billion in pledges. Major donors upped their support, including the UK and Canada. Given that globally aid is flat or declining, $12 billion seems like a good outcome.

The Global Fund was no doubt disappointed that Australia didn’t commit more. Mark Dybul, the fund’s Executive Director, visited Australia twice this year, most recently in October. Advocacy groups were calling for a much larger commitment, of $375 million, and Labor and the Greens through Tanya Plibersek and Lee Rhiannon respectively have slammed the decision.

At the same time, some will be relieved there wasn’t actually a cut compared to earlier levels of funding. After all, the Coalition has said it will keep the aid budget flat (adjusting only for inflation) and it has given some fairly clear signals that it will tilt away from funding multilaterals.

The replenishment does signal a change in approach to the Global Fund. Australia started supporting the fund under Howard, and became an increasingly important supporter under Labor (an adverse finding on the Fund in our Australian Multilateral Assessment notwithstanding), with our funds reaching 2% of total Global Fund pledges for the 2011-13 funding round. Now (using today’s exchange rates) we’re going to be back to 1.5%. 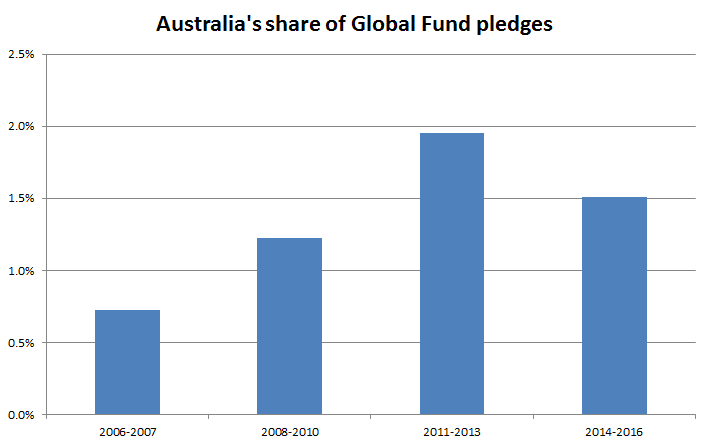 This decision is also significant as it is the first major aid funding announcement that the Coalition government has made. The Coalition has said it will cut $656 million from the 2013-14 aid budget. As we near the half-way mark of the 2013-14 financial year, we still have no idea how the cuts will be made. Now, with the Global Fund announcement, at least one building block is in place —though we don’t actually know how much of the 2014 contribution will be paid in the current financial year. It is reasonable to guess that it won’t be much.

There are other big multilateral replenishments coming up soon, including the biggest, for the International Development Association (IDA), the concessional arm of the World Bank. Their negotiations on the next three years of funding wrap up in Moscow on the 16-17 December.