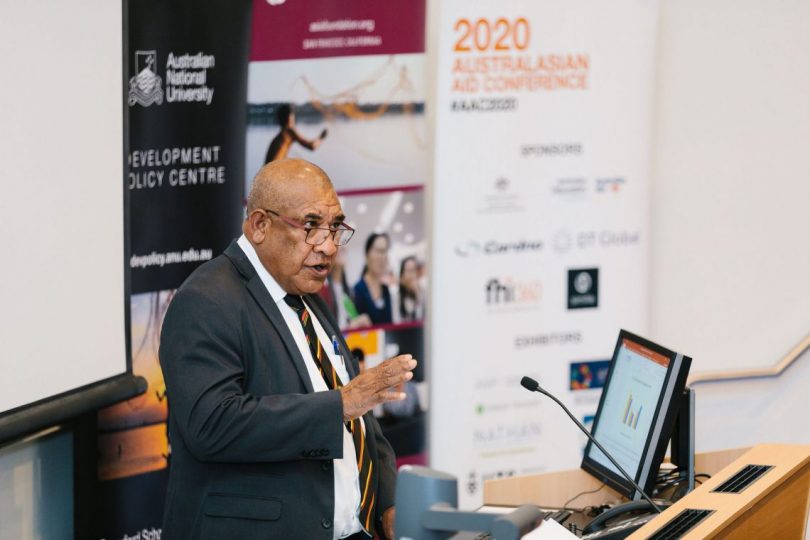 This is the first of a two-part blog series based on a speech by Papua New Guinea’s High Commissioner to Australia at the February 2020 Australasian AID Conference. You can also watch a video recording or listen to the podcast.

Before I share my personal experiences, I want to thank the Australian people and its government for their enduring and lasting support to my people through the many programs to address developmental challenges in health, education, law and order, agriculture, forestry, infrastructure, leadership and governance, sports, and churches either directly or through the government, churches, management contractors and NGOs. Our Australian friends have brought many lasting smiles to the people, both young and old, in my beloved country. For that we are forever thankful.

The experiences and the lessons I share this afternoon are from many long years working in the public service, at managerial and leadership levels at the national, provincial, district and local government levels. I am providing an honest insight into Australian aid to Papua New Guinea (PNG), particularly in the area of leadership and governance, hoping this can help to better position the wonderful support Australian taxpayers are giving our nation. I believe effective leadership and governance at all levels is a key component to the sound design, development and delivery of Australian aid/support to PNG.

Recently, I have also been interacting with PNG Kumul Force 17 (KF17) engaged in “Operation Bushfire Assist 2020”. The little that our soldiers have contributed jointly with other nations has not only restored lives but I believe has left a lasting impression with many ordinary Aussies. This got me thinking about the significance of the huge amount of Australian aid to PNG but also more importantly about the manner in which Australian aid has been and is being designed, structured, managed, delivered and reported on in PNG.

Since independence, Australia has been PNG’s largest bilateral supporter. The way Australian support has been negotiated and delivered has generally reflected the closeness and enduring nature of our bilateral relationship. However, there have been significant changes in the way the Australian aid has been delivered since independence. From 1975 to the early 1990s, it was budget support. From the 1990s to 2000, aid was jointly programmed and focussed on priority sectors. The early 2000s saw increased integration and use of our systems and processes. During this period, the entire Australian program was coordinated and integrated into the PNG Medium-Term Development Plan (MTDP) and the annual budget, through key central agencies as well as relevant line agencies.

Australian officials would provide quarterly updated allocation and expenditure figures to us and we, departmental heads and senior officials, were regularly involved in the prioritisation, coordination and high-level decision making and monitoring processes of the Australian program – which itself was integrated significantly within our systems and processes.

Many of my fellow Departmental Secretaries and Deputy Secretaries over the years have experienced and observed the Australian program delivery changes and so are able to reference what has been good, and what has been difficult. Let me elaborate with a specific example.

The Economic and Public Sector Program (EPSP, 2010-2015) provided governance support at both national and subnational level. The EPSP Governance Committee, which I presided over, comprised mostly our National Departmental Heads who made all program delivery decisions, including program design, program budget allocation and monitoring, capacity development agreements, and reported annually to our cabinet.

I am saddened and somewhat disappointed to note that this level of partnership and joint engagement has been lost in the past few years, leading to a significant decrease in transparency in decision making and in the prioritising of effort. My government has attempted to address this loss of engagement through proposals at the PNG/Australian Senior Officials’ meetings and ministerial forums in 2015 but little seems to have been progressed from this.

I have no doubt that the reasons for the loss of engagement are many and complex, but the result for many of my colleagues, who have been involved in Australian aid for many years, is frustration, confusion and a loss of effective and transparent engagement.

The key changes, as I observe and have experienced, in the way current Australian assistance is being delivered are as follows.

A significant degree of strategic planning and programming and decision making for resourcing is taking place outside of our government circles, sadly without justification for the expenditure. PNG managers and leaders have been left out. There has been a significant decrease in the use of PNG government systems, procedures and processes.

There has also been a significant decrease in the coordination of Australian support. There was a time when all assistance was coordinated and prioritised through the Department of National Planning and Monitoring. The shift of these controls to the Office of the Chief Secretary has left a lot of agency heads disenchanted.  It has provided the Australian High Commissioner direct access to the Chief Secretary and, even the Prime Minister, where decisions have been made unilaterally, without the involvement of other key central agencies and line agencies. Consequently, there has been a lack of interest by key central agency heads and other agency heads in setting priorities, coordinating and program decision making.

I have also witnessed a worrying trend with the emergence of Australian funded facilities and management contractors with little explanation to PNG on how programming priorities and decisions are made. There appears to be no transparent procurement process in the engagement of these management contractors and our government is now demanding for an open transparent procurement process, with a level playing field, where PNG companies also bid. I believe our Prime Minister’s strong push to “take back PNG”, must be seen in this context, where he wants to see more PNG content.

The so-called Papua New Guinea Governance Facility (PGF) was set up to allow key central agency heads to provide leadership and articulate our government’s priorities in the various sectors we were to preside over. We would field requests from different agencies and consider them against government priorities and either approve or reject, thinking that the approved ones would straight-forwardly get funding support from PGF.  That was not to be the case because DFAT would always intervene and reject the approval for reasons unknown to us. We came to regard the PGF as mere “window dressing”.

Overall, there has been a significant decrease in transparency and accountability of what is actually being delivered. We actually have no understanding of what is working and what is not.

But of course, the world is changing. In the second part of this blog, I will set out how we must adjust our bilateral relationship with Australia to meet different demands and expectations, and improve the situation on the ground.

This is the first blog of a two-part blog series. Read the second blog here. You can also watch a video recording or listen to the podcast from the 2020 Australasian AID Conference session with the author.