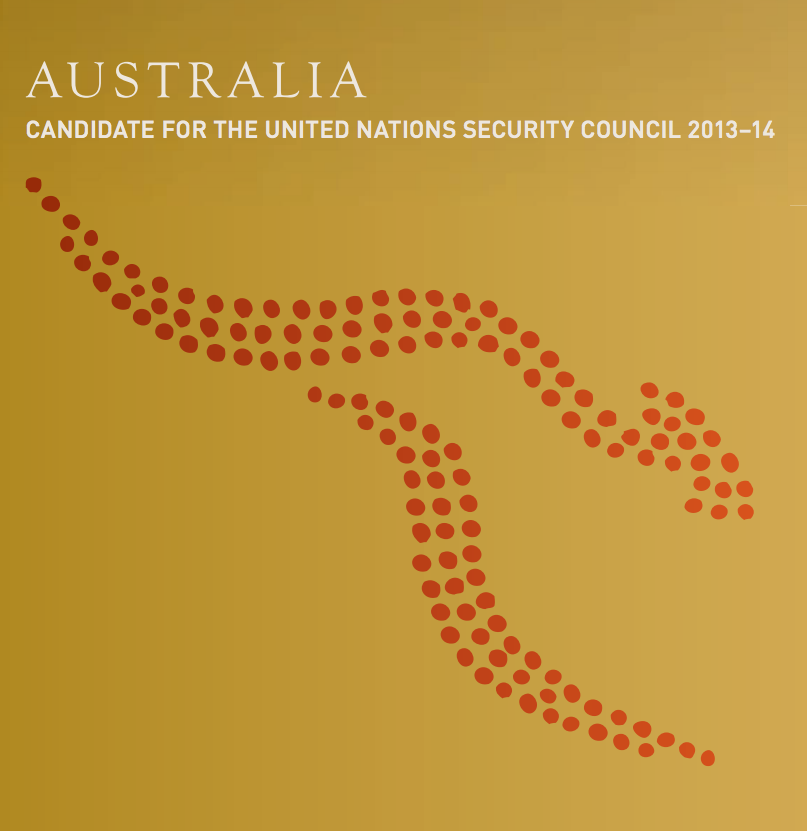 Domestic observers of Australia’s aid program are mostly preoccupied by changes in its size over time. Many view with understandable and deep concern the fact that Australia’s aid effort, measured in terms of the ratio of aid to Gross National Income (GNI), now stands at its lowest level ever, 0.22%.[1]

However, for the purposes of the government’s forthcoming foreign policy White Paper, it’s Australia’s performance relative to that of other wealthy countries that matters most. Australia’s capacity to achieve its desired outcomes in the multilateral arena, such as election to the UN Security Council in 2013-14 and 2029-30, or to the UN Human Rights Council in 2018-20, depends in no small part on the extent to which Australia is perceived to be providing—or at least fixing to provide—its fair share of international development assistance.

It should be recalled that Australia’s generosity as an aid donor was a central plank of the case made by the Rudd and Gillard governments for securing the 2013-14 Security Council seat. This was expressed in terms of our commitment to a ‘double doubling’ of aid over the decade from 2005 to 2015. Aid was projected to reach $9 billion by 2016-17, by which time, it was suggested, Australia would become the world’s sixth-largest aid donor.[2] And the campaign was backed by the slogan, retrospectively regrettable, ‘we do what we say’.

For most of the past two decades, Australia’s aid effort, while less than it had been in earlier decades, was above average among the member countries of the OECD’s Development Assistance Committee or DAC (Figure 1).[3] Only once did it drop significantly below that average, in 2005, just before the Howard government’s commitment—announced, notably, on the eve of a UN leaders’ summit in New York—to the first doubling of aid between 2005 and 2010.[4]

In 2017, though, Australia’s relative performance will fall to a new historic low—likely to be about 75% of the OECD average—at a time when Australia’s GNI per capita remains healthy.

Figure 1: Australia’s aid effort and prosperity in the OECD context 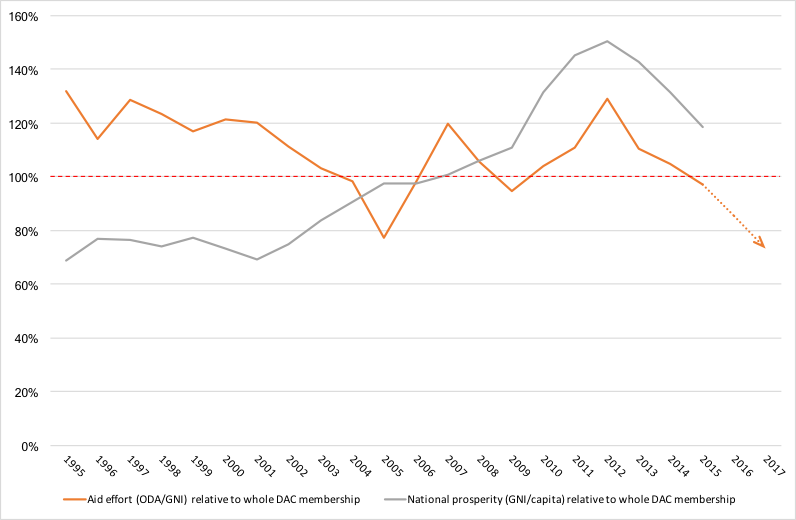 Source: OECD aid statistics. Effort projections for calendar years 2016 and 2017 are based on the assumption that Australia’s 2017-18 aid budget is maintained at about the 2016-17 level in dollar and ODA/GNI ratio terms.

By contrast, total OECD aid has roughly kept pace with the OECD area’s GNI growth for the past decade, expanding by 20% in real terms. Over the 15 years since the turn of this century, OECD aid has grown by 82% in real terms. And it achieved new record highs in each of the three years to 2015.

As for Australia’s ranking among OECD donors, this year we will likely rank about 18th for aid effort—measured, as noted, in terms of the ratio of aid to GNI. That takes us back to 2005 (Figure 2). 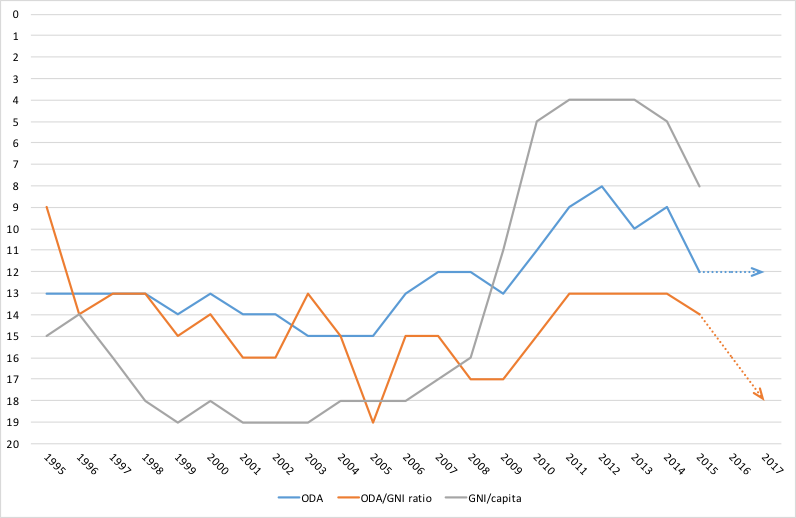 Source: OECD aid statistics. Projected rankings for calendar years 2016 and 2017 with respect to ODA and ODA/GNI ratios are based on the assumption that Australia’s 2017-18 aid budget is maintained at about the 2016-17 level in dollar and ODA/GNI ratio terms, with parameters for other donors held constant.

While we will probably continue to rank about 12th for aid quantity, because there is a big gap between us and the next donor down (Denmark), this is well below our rank on GNI per capita, which was 8th in 2015.

For Australia to provide a level of aid that is internationally perceived as commensurate with its responsibilities as a wealthy country and a good international citizen, the comparisons above suggest that we would need to be ranking around 8th in the OECD for aid volume and no lower than 13th for aid as a proportion of GNI.[5] Right now, that would require getting our aid a notch or two above $5 billion—in other words, restoring it roughly to the levels seen during the first year of the Abbott government. But obviously no sudden restoration can be expected in the May 2017 budget. The largest single-year increase ever seen in Australia’s aid budget was about $620 million in 2008-09. We are not about to see a single-year increase of more than $1.2 billion.

From an international respectability perspective, however, what counts is really Australia’s perceived trajectory rather than our performance at a given point in time. The government of Canada made much of its upward aid trajectory in the course of its (ultimately unsuccessful) campaign for a 2011-12 UN Security Council seat, as did Australia in the course of its campaign for the 2013-14 seat, which sought to apply the lessons, both positive and negative, of Canada’s effort. Both countries dramatically lowered their aid trajectories straight after the elections were done (see here on Canada’s cuts), making it rather harder for them now to run any kind of campaign on a we-do-what-we-say platform (Canada is now pursuing a 2021-22 Security Council seat).

Leaving the awkward credibility issue to one side, or else hoping foreign memories are short, the Australian government has the option of making a beeline for respectability as an aid donor by setting out a clear trajectory to achieve at least an average level of generosity over several budgets.

The OECD average has been quite stable at around 0.3% of collective GNI for a long time. Targeting 0.3% of Australia’s GNI within a few years would mean aiming for an aid budget, in today’s dollars, approaching $6 billion by 2019-20. That would require average annual increases, over three budgets, somewhere a little north of $600 million—increases of a rare but not unprecedented magnitude (we have seen comparable increases in 2005-06 under Howard and in 2008-09, 2010-11 and 2011-12 under Rudd and Gillard).

If climbing back to 0.3% of GNI over three budgets sounded initially unambitious, it isn’t. But it’s feasible at a stretch. It’s what I’ve recommended in my contribution to the Development Policy Centre’s submission to the government’s White Paper consultation process.

[1] This estimate is based on the 2016-17 economic growth forecast contained in the December 2016 Mid-Year Economic and Fiscal Outlook.

[4] Howard said, in his address to a high-level plenary meeting of the UN General Assembly on 16 September 2005, ‘The Summit has seen much discussion about aid levels and I was pleased to announce earlier this week my government’s goal to double its overseas aid allocation from 2004 levels to around $4 billion by 2010’.