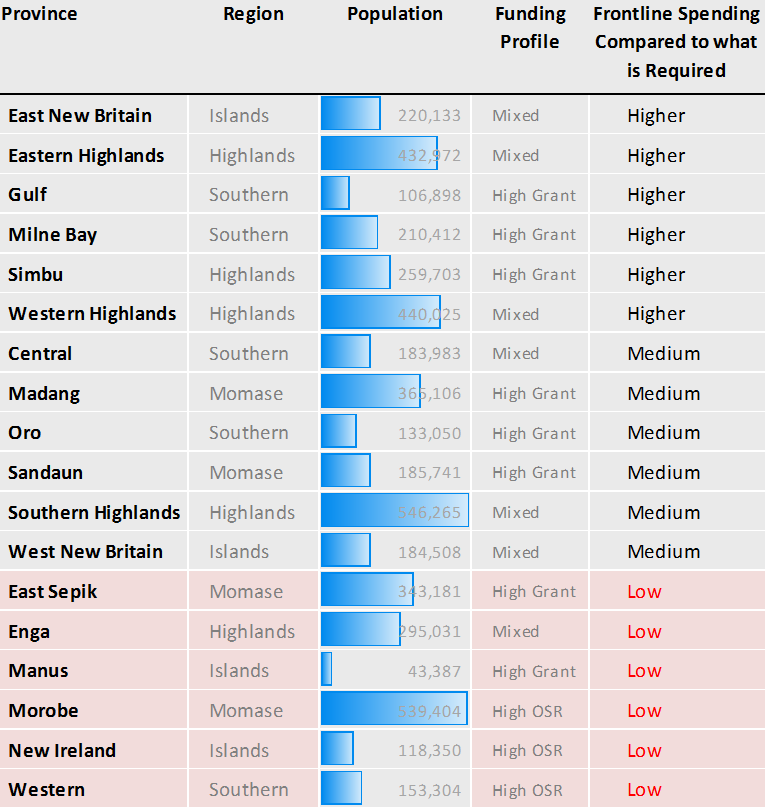 It was the impromptu visit to the health centre at Kaiapit in 2007, some two to three hours by road from Lae, the capital of Morobe, that was to leave an enduring memory. It wasn’t the centre itself – it appeared orderly. Nor was it the officer-in-charge – for she impressed as hospitable and alert. What I recall quite vividly was the disturbing image of a young lady lying, curled up, on bed-boards with no mattress. She was motionless and never stirred. Sitting quietly at her side were two older women who recounted in a way that was soulful yet matter-of-fact how they had carried her from their village across a river to this clinic in search of treatment. The OIC explained that her condition was due to complications with her pregnancy.

In the report Below the Glass Floor we seek to better understand the relationship between rural health funding and the service delivery realities for rural folk in Papua New Guinea. Is what we’re spending delivering on government’s ambition? To understand this relationship as we look through a financial lens, we need to be explicit in what we mean by rural health. We need to identify the service delivery activities in rural health that require money to make them happen. And then we need to compare the amount provincial governments actually spend against what they need to spend to adequately support these service delivery activities.

As we sharpened our focus our analysis looked at six activities in the rural health area (more detail on each is available at the end of this post). The first is funding for rural health facility operations. The second is money for staff to conduct outreach patrols. The third is funding to support the distribution of medical supplies to facilities. The fourth is for money to enable patients to be transferred in emergencies to facilities more capable of treating their condition. The fifth is for the provision of clean water. The sixth, and last, is for staff to conduct supervisory visits to facilities. There is broad acceptance of the validity of this list as these things are both basic and central to a rural health service, which in Papua New Guinea serves 85% of the country’s population.

These are not simple questions to analyse or answer and the more one enquires, the more complex the picture can appear. However, these are surely questions that deserve attention despite the inherent challenges. Below the Glass Floor is the first part of a wider analytical process that encompasses the analysis of National Health Information System (NHIS) facility performance data by the World Bank team and a synthesis of the phase one findings of the commendable research work that interviewed 142 health facilities, recently completed by the joint National Research Institute/Australian National University Promoting Effective Public Expenditure Project (PEPE) team. It is hoped that the pictures that emerge from this collective work can assist government in its endeavours to further improve the rural health service delivery mechanism.

So what are the major findings? 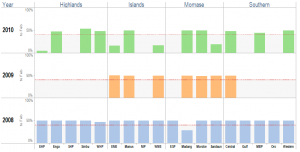 One of the principal findings relates to the national level. The national government has committed increasing amounts of health function grant funding since 2009. However, the study found that the release of this funding from the national level to the provincial level varied each year, and varies markedly across provinces (see the chart to the left that depicts the release of funds by Treasury by the end of February). There was no apparent consistency in the way the health function grants were released, which is in itself a major problem for those charged with planning and implementation. And often, too much money would come too late in the year to support service delivery priorities in a sensible and considered manner.

A second key finding was the need for clarity over functional responsibility. The government has a mechanism in place for clarifying functional responsibility, the Determination Assigning Service Delivery Functions and Responsibilities to Provincial and Local-level Governments. However, the study found uncertainty in several key areas which [then] correlates to low or no spending in those areas by provinces. These areas are: the distribution of medical supplies, emergency patient transfer and the provision of clean water supply. 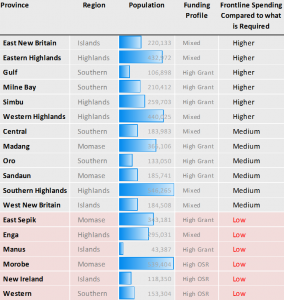 The analysis on spending patterns on priority activities reveals a mixed picture. We do see signs of improved spending, sometimes markedly so, on facility operations and patrols. In contrast, the spending on the distribution of medical supplies, patient transfer, water supply and supervision was typically disappointing. One of the difficulties we experienced was the lack of a standardised chart of accounts across all provinces: meaning each province uses a different approach in classifying their budget and expenditure. This makes analysis and interpretation extremely difficult.

The analysis of the eighteen provinces reveals eighteen stories. Whilst we can force some general findings, the informed reality is more nuanced (perhaps not unpredictably), with each province having its own story across the five years of data and the six key activities. Nevertheless, the table to the right collates the findings to form a profile of spending by each province on frontline activities. It is disturbing that provinces with higher levels of own-sourced revenue (such as GST and resource revenue) typically spend less on rural health. The consequence of this should not be lost: rural health in Enga, Morobe, New Ireland and Western will not improve until these provinces allocate more revenue to key service delivery activities in rural health.

The World Bank recently convened a workshop in Port Moresby that involved participants representing both provincial and national level views. There is a consensus that many frontline rural service delivery activities in health emanate from rural health facilities – it follows that funding for facility operations, patrols, (very) basic maintenance and some emergency patient transfer needs to be ring-fenced and accessible at the facility level. Making progress on how to better fund facilities is a priority issue. Some issues require national leadership and sympathetic support from central agencies to progress. The Department of Provincial and Local Level Government (DPLGA) together with the Department of Health can help resolve the unclear aspects of function assignment (i.e. who is supposed to do what). Another recurring issue is the flow of funds from the national level – the Department of Treasury hold the key to this.

More broadly, the architecture of the sub-national level continues to change and adapt with the advent of Provincial Health Authorities (PHA’s) in some provinces (PHA’s are new entities formed to manage all aspects of provincial health – including the provincial hospital and the network of rural health facilities) and discussions around the new concept of the District Development Authority (see the recent DevPolicy blog post by Colin Wiltshire). The realities of implementing new mechanisms that will in turn create new actors across the country presents as a large challenge. These new institutions will need to be carefully woven into the existing fabric of the government service delivery chain if the desired improvements in service delivery are to be achieved. If this fusion does not take place the unintended result may simply be a more convoluted system with even more actors.

The antidote for all of these challenges is to keep our eye on the ultimate objective, to maintain a clear line-of-sight of what we mean by frontline service delivery, and for the key participants at the sub-national and nationals levels (Provincial Administrations, PHAs, churches, Treasury, Finance, Provincial and Local Government Affairs, et al.) to continue with their commitment to jointly resolving the issues that inhibit the aspirations of government.

Below the Glass Floor was published by the World Bank in partnership with the Papua New Guinea National Economic and Fiscal Commission and the Australian Department of Foreign Affairs and Trade.

Alan Cairns is a consultant on the World Bank’s health analytic team and an adviser on the DFAT Provincial and Local-level Governments Program, which provides assistance to the National Economic and Fiscal Commission.

Summary of findings on spending to support front line activities

Alan Cairns is a consultant on the World Bank’s health analytic team and an adviser on the DFAT Provincial and Local-level Governments Program which provides assistance to the National Economic and Fiscal Commission.