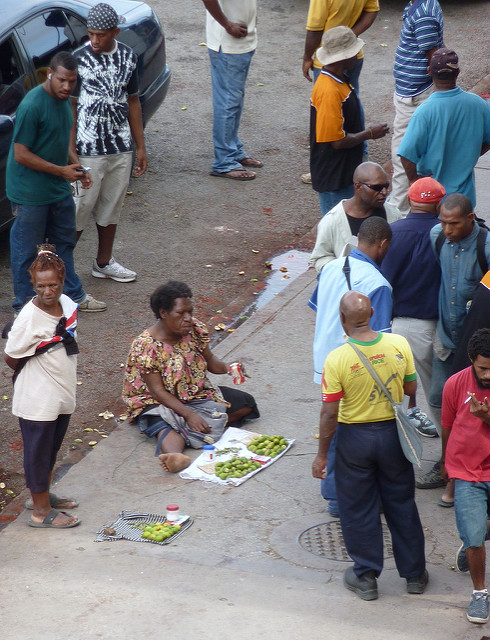 Port Moresby residents are now warned not to chew betelnut in public places as the National Capital District Commission (NCDC) imposes a 500 Kina spot fine on chewing and spitting. A combination of the nut mixed with powder lime and mustard produces the infamous “colour red” that is now responsible for drawing ire from the public and now the hefty spot fine. The spot fine came into effect on 1 August 2016, just a couple of months ahead of the FIFA Under 20 World Cup to be staged in Port Moresby. It seems a trend is developing where the city commission toughens up on the sale and consumption of betelnut when a major event is about to take place in the city. We saw this last year when the city hosted the 2015 Pacific Games and a ban on betelnut sale in Port Moresby was introduced.

Betelnut, or areca nut, is the seed of the areca palm (Areca catechu), which grows in much of the tropical Pacific, Asia, and parts of east Africa. This seed is commonly referred to as betelnut, so it is easily confused with betel leaves that are often used to wrap it (paan). In Papua New Guinea betelnut or buai, as it is commonly known in the local Pidgin dialect, is grown along the coastal region but is now widely consumed.

The betelnut ban forced people to resort to illegal means to earn income, often at the expense of poor farmers back in the villages, particularly along the Hiritano Highway of the Central Province. In Port Moresby the ban gave rise to a thriving “middleman” business, most of whom used the law to their advantage. The imposition of the K500 spot fine against chewers means that the war against betelnut will come to its complete cycle.

When the betelnut ban came into effect last year, a mother was run over by a vehicle while fleeing from the pursuing betelnut enforcers. The picture of her child sitting next to her lifeless body on the side of the road, captured on the front page of one daily newspaper, was heart-wrenching. Her death was tragic yet it heralded the beginning of the ugly, and I might add fatal, side of the ban. No one was immune to the ban, including the Motu Koitabu villages. The death of a Hanuabada man and several injuries sustained by the villagers are remnants of the harrowing impact of the ban, another tragic story. A few weeks ago a youth from Tari in Hela Province was shot dead by police when he was alleged to have smuggled betelnut bags into the city in his vehicle. Since then, his relative can be seen marching up and down the street in Erima with a wheelbarrow seeking donations from the public allegedly to repatriate the body back to the village, and a “laplap” placard demanding retribution from the government.

At the height of the ban’s implementation the public was subjected to unnecessary random checks. Most times the rangers’ conduct was hilarious and uncalled for as they carried out their roles in a misguided manner, often at the disgust of the public. Now that the K500 spot fine is being effected the public should remain vigilant to avoid opportunists who may disguise themselves as betelnut rangers to take advantage of the hefty fine. The betelnut ban could be deemed an abuse of human rights if it is imposed even when people are chewing responsibly.

The commission itself needs to also make it clear whether it is imposing a “total ban” on the sale and consumption of betelnut, or only “restricting” its sale and consumption to designated areas within the city. In spite of the ban the betelnut trade is thriving in all parts of the city and at times in full view of the public, including the betelnut enforcers. Even the engagement of police to enforce the ban has been controversial. Police officers are after all constitutional office holders who are tasked to enforce the law and deal with criminal issues as per the Criminal Code [pdf] and the Summary Offences Act. The sale of betelnut is in no way a criminal activity and therefore the engagement of the police is questionable. The only way to warrant or justify their engagement will be to declare “betelnut” an illegal crop much like marijuana. This would then mean that its production, supply and consumption are illegal. Without such declaration the engagement of police poses some legal questions.

From this perspective it can be deemed that the only reason why police are involved is to effect arrest as per the Arrest Act. Yet this is questionable as well when betelnut is not an illegal crop. NCDC, being the municipal authority, should only enforce its laws, including the betelnut ban, by setting up inspectors to ensure those laws are adhered to. In fact, if history is any indication of how effective NCDC’s partnership with police has been under this ban then the rampant reports of police-aided smuggling and police barracks flush with betelnut should disqualify any further partnership of this nature. This is where NCDC needs to activate its inspectorate functions so that properly trained inspectors, equipped with adequate resources, are able to enforce its rules and regulations on a day-to-day basis. These inspectors should be allocated designated sites for which they are responsible, and should be readily and easily identifiable by the public.

The national government at a certain point needs to intervene to ensure the ban is not draconian in nature. This is because the sale and consumption of betelnut in Port Moresby affects every Papua New Guinean regardless of one’s socioeconomic status, cultural background, ethnicity and religious affiliation. Port Moresby is a multicultural city and the ban has already claimed lives. If left unchecked it could claim more lives. Secondly, the economic and social loss caused by imposing the ban is substantial. From the outset it runs counter to the national government’s efforts to stimulate the Small and Medium Enterprise (SME) Sector. Let’s be fair dinkum here: the moniker “green gold” is not given to betelnut for nothing. The largest single group of potential SMEs engaged in the urban informal economy are betelnut traders. This is reflected in the fact that betelnut is included in PNG’s Consumer Price Index Basket.

It is inevitable that informal economy will still remain a dominant force in the economy for many years to come, and this is where the government needs to provide space for dialogue with the participants of the informal economy. The absence of such a mechanism has led to conflicts and, in the case of the betelnut ban, death.

At this juncture perhaps the national government should explore the idea of introducing a national policy on betelnut. Betelnut certainly exhibits attributes that demand its own policy: a huge domestic market worth millions of Kina that shows no sign of slowing down and a supply chain that is the epitome of agriculturalists. There is also potential to export betelnut to overseas markets. In Taiwan, betelnut remains the country’s highest grossing agricultural product with an estimated value of about NT$8.8 billion (approximately US$270 million). Statistics released in 2005 by the Council of Agriculture also showed that betelnut is one of the most competitive Taiwanese agricultural products exported to China. PNG’s ever-growing relations with China presents an opportunity for our betelnuts to tap into the Chinese market. This should address the rising unemployment rate in PNG given the betelnut industry supports a significant number of urban unemployed population.

To its credit, the city municipal authority did propose a plan to support cottage industry mostly betelnut traders. The commission’s initial plan was to engage Askopina Ltd to purchase and supply dehusked and packaged betelnut to the city residents. However that plan did not eventuate. There is a need to revisit that plan but with a more balanced approach, ensuring that producers are properly compensated for their efforts. Yet the reality is that such a notion of fairness stands on a shaky ground when this arrangement is creating a monopolistic situation where Askopina will be the sole buyer and reseller.

A few years ago NCDC was proposing to set up night markets in the city to encourage night trade in its bid to “regain the night life” in the city. Perhaps betelnut trade can be encouraged during the night at designated sites, while other, non-betelnut informal economic activities can be conducted during the day.

Above all, the aim should be to regulate rather than ban betelnut sale and consumption. To this extent, the K500 spot fine could be a step in the right direction, but only if it is implemented properly.

Busa Jeremiah Wenogo is an economist working with the Consultative Implementation & Monitoring Council as a Senior Project Officer, specializing in the area of PNG’s informal economy.