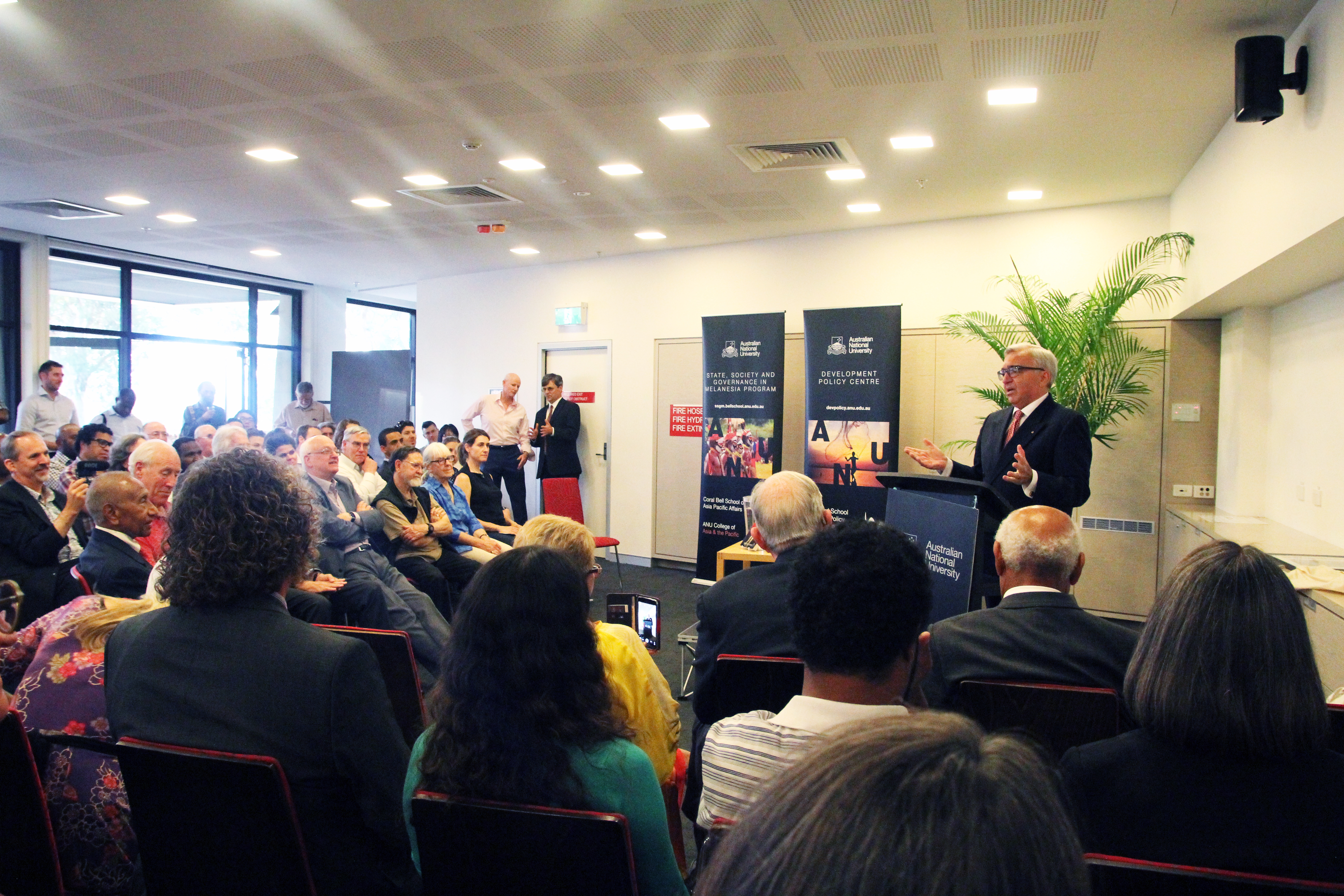 Bill Farmer AO was Australia’s High Commissioner to Papua New Guinea from 1993 to 1995. He spoke last week at the Devpolicy launch of the memoirs of Sir Julius Chan, former Prime Minster of PNG.

Sir Julius. Thank you for your book, which I have read with fascination and respect, and with occasional tingles of disagreement.

In Australia in recent years we have had a mini flood of political memoirs, some of them what the butler saw, others verging on science fiction, but the field is much thinner in the case of Papua New Guinea. And your book is important for that reason, among many. But to read something of the past fifty years of Papua New Guinea’s path to independence, and path since, through your eyes — and to read of your own personal feelings throughout that process — has been a real privilege.

You say that you did not inherit a system, rather you helped construct a country; and your account of those first tentative years of construction, and of the sometimes tempestuous years that followed, is a major offering to anyone with an interest in Papua New Guinea. And, as Sean Dorney has recently reminded us, there should be more Australians who pursue that interest.

Thank you, especially, for your evocation of the hopes that flourished amidst all the heady and daunting days following independence; as you put it, a mentality committed to the cause of self-government and independence, and everything that would lead to prosperity and build a more satisfying life. And, more somberly, your admission of being now “a little bit uncertain” about the country’s future. And that uncertainty seems apt when we consider the way in which the early hopes for better health and education have not been realised; when we see elements that you identify as having had a serious effect on non-mining sectors of the economy and that have brought the economy to a current low ebb; and when we survey the pernicious effects of corruption, domestic violence, crime and the erosion of the institutions of state. You have given us a serious basis for thinking about these issues.

I was particularly struck by the weight on your mind imposed by the Bougainville issue. That weight still seems to be there, and that is understandable given the part this issue played in the ending of your time as Prime Minister. There are some elements of this saga that are still not clear to me, and so it seems to you. Primarily, the swirl of motives and actions around the Sandline affair, on which we have a few accounts, including yours, and the one some years ago by Marie-Louise O’Callaghan. But from my own personal experience, both as High Commissioner in Port Moresby in 1993-95, and subsequently in Canberra, there are a few things that I would like to add.

The first is my regard for the leadership you demonstrated in pushing for something to be done to end the suffering of people on Bougainville. As you put it, you were not the sort of person to take the chair and not resolve the main issue. I think particularly of you approving the visit to Bougainville in 1994 of an Australian parliamentary delegation and subsequently of a South Pacific peacekeeping force to facilitate peace talks; and of the subsequent Bougainville Peace Conference in Cairns.

The second relates to the Sandline affair, and in particular to your discussion of the then-Australian government’s attitude. You note that you thought there was no good reason for the Australian view, no good reason for Australia to object to the deal. The Australian view, as I recall, was that it was a highly undesirable development to import foreign mercenaries into our region, and a development moreover that would be likely to visit greater depredations on the population of Bougainville. Well, Sir Julius, I guess that good friends have to differ sometimes. What we do not seem to differ on is the subsequent serious threat to democracy in Papua New Guinea, which you describe so vividly, and the deleterious side effects in the shape of concerns about bribery and corruption.

As friends, we might also agree to differ on the question of relations between out two countries. You offer us mixed feelings: regard for individual Australians with a real concern for Papua New Guinea; your own development as a member of the public service; and your views about boomerang aid, Australian indifference, and Australian high-handedness. Forty years on from independence, I guess we are all working at the mix, which also contains important elements like our joint efforts in areas like development cooperation, defence and police cooperation, volunteering and the Kokoda Initiative. And I wonder whether it has given you private amusement to see the way in which Prime Minister O’Neill has used the leverage given to him by the Manus connection to, occasionally, twist the kangaroo’s tale.

Sir Julius, I count it an honour to thank you for your memoirs. They bring back to me memories of the Prime Minister you were: your decisiveness, your capacity to cut through, your plain speaking, your readiness to engage frankly. If I may say so, you have lived up to, and continue to live up to, your mother’s injunction Yu mas go nau, Yu got wok [you must go now, you’ve got work]. And finally, may I thank you for one of my most treasured mementos from Papua New Guinea, a photograph from the Post Courier during Paul Keating’s  visit in 1995. The photograph is of you shaking hands with me, with the caption: “Australian High Commissioner Bill Farmer greets Sir Julius Chan, with Australian Prime Minister Paul Keating a bystander.”