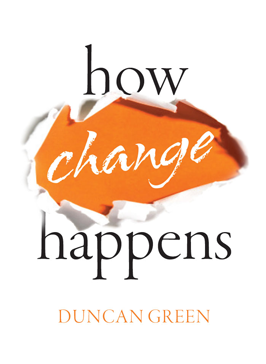 In his most recent book How Change Happens, Duncan Green offers activists a refreshing new framework for working towards change in a complex and unpredictable world. His book offers a path towards embracing and working with the shades of grey that exist around the myriad of issues that activists around the world are working to change. But, as a researcher embedded within an international NGO (Green is a Senior Strategic Adviser at Oxfam Great Britain, as well as a prolific blogger), he avoids directly engaging with the delicate question of how the power imbalance between activists in aid giving and aid receiving countries affects their ability to work together to make change that is meaningful to all.

The book is divided into four parts. The opening section of the book outlines Green’s overarching conceptual framework for understanding change – what he calls the ‘power and systems approach,’ or PSA. This approach to thinking about activism is Green’s alternative to campaign strategies that are based on a linear understanding of change. Specifically, he critiques the idea that campaigns should have a ‘problem, solution and villain’, arguing instead that there are potentially many different solutions to problems that can evolve in unpredictable ways, and that activists need to be flexible and open to unexpected opportunities to make change. The starting point of the framework is that our society is made up of complex systems of relationships between different actors that change over time. According to Green, the power that different actors have, whether it is “visible” or ”hidden”, plays a critical role in driving change within these complex systems. The final element to his framework is the role of norms – or the rules governing social behaviour –  in influencing change. He argues that norm changes precede practical change and that activists need to think about how they can shape those “implicit or explicit rules” (p 48). These three elements – a systems approach to understanding the world, an explicit consideration of power and the centrality of norms – are the frames he uses in his analysis in the remainder of the book.

The second and third parts of the book describe the institutions that “activists belong to, ally with, or seek to influence” (p 75) and the way activists go about making change with respect to these institutions. Green writes a chapter for each of the institutions he believes are instrumental in making change: “states, the machinery of law, political parties, the international system, and transnational corporations” (p 78). He provides a brief outline of their history, describes the systems influencing and affecting that institution, and then maps what kind of power the institution has and its influence on norms.

The book then goes on to look in detail at the role activists play in making change. He focuses on three areas of activism – civil society organisations, the concept of leadership and the role of international NGOs in advocacy. The final part of the book provides a detailed breakdown of frameworks that activists can use to plan and approach the change-making process. Green provides a step-by-step breakdown of how his PSA model can be used in practice, including useful diagrams to map out the way activists might choose to combine different and changing strategies over time.

Green understands his readers, and the book is written in easy to follow and accessible language. His overview of systems theory, power and norms draws on extensive academic research, but is presented in a way that is clear and unintimidating. More importantly, by bringing these ideas into a discussion about activism and aid, Green is encouraging a new way of thinking about the process of making change – an approach that is more reflective, thoughtful and experimental.

What is striking though about this book is Green’s reluctance to apply the power and systems analysis to the industry in which he himself works. In his analysis of institutions, there is no direct description of the role the international aid system itself plays in making change. He hints at the links between state agendas, international aid programs and priorities of international NGOs, but does not spell out how these structures can enhance, but also significantly limit activism in aid-receiving countries. There is a large body of work about the dampening effect that international aid has had on the politicisation of local civil societies around the world. International aid can change the incentive structures for local activists, pulling them towards working for well-funded NGOs rather than engaging with politics; it can push local activists to become more accountable to their donors than to their constituents; and it can unintentionally marginalise activists who don’t have the language or cultural skills to build connections with international donors. These are challenges which I am sure Oxfam and other NGOs have grappled with, but which are, surprisingly for a book that engages so directly with the idea of power, not explicitly addressed.

These relatively minor issues aside, How Change Happens is a great read for people in the business of changing the world. Green does an excellent job of making academic theory accessible and practical for activists and practitioners with limited time. The approach he took to writing the book – inviting the public to comment on drafts and making it available freely online – illustrates that he is putting into practice the ideas that he proposes in his book, including being open to feedback and letting ideas be ‘stolen’ so they can evolve and be done better. It is an important piece of work, providing readers with a way of working with the unpredictability and complexity that inevitably emerges when working to make the world a better place.

Dr Thushara Dibley is the Deputy Director of the Sydney Southeast Asia Centre. She researches social movements in Southeast Asia, with a particular focus on Indonesia and Timor-Leste. Her recent research projects have focused on the role of NGOs in peace-building in Timor-Leste and Indonesia and on the disability movement in Indonesia. She is the author of Partnerships, Power and Peacebuilding: NGOs as Agents of Peace in Aceh and Timor-Leste (2014).

Duncan Green will be in Australia to launch How Change Happens this week. He will be speaking at the University of Sydney on Monday 3 April, the Development Policy Centre, ANU, on Tuesday 4 April, and in Melbourne on Thursday 6 April.