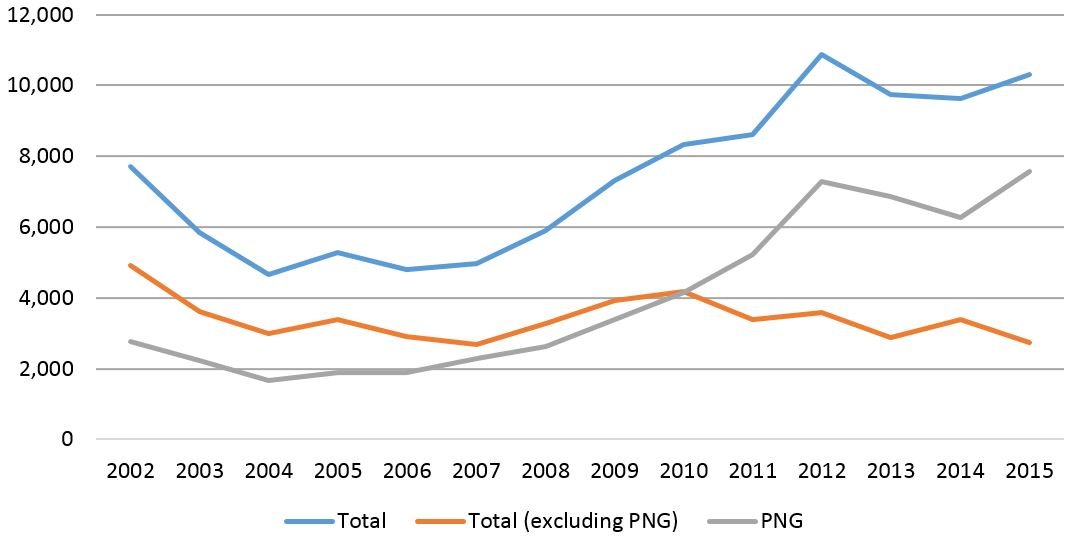 The recent Pacific Possible report on labour mobility [pdf], produced by the World Bank and the Development Policy Centre, touched on the potential to expand Pacific labour mobility through existing migration pathways.

In this post, I analyse migration flows from the Pacific through standard Australian migration programs. The analysis shows that these visa categories are not delivering substantial flows to the Pacific.

The total number of commencements from these countries (blue line) has increased over the past decade, after dipping off in the mid-2000s. This is at least partially attributable to Australia’s priorisation of education scholarships through the aid program. According to the OECD Stat database, Australia allocated $153m to education expenditure in 2006, or 8.6 per cent of total ODA. By 2014, expenditure on education reached $529m, or 15.1 per cent of total ODA. Given the cost of international student education in Australia, it is difficult for most citizens from these countries to study in Australia without financial assistance.

This looks like good news until placed in broader context. The number of commencements in 2015 from these eight countries represents just 0.3 per cent of all commencements in Australia. And, if Papua New Guinea is removed, there is no growth for the other seven countries. In fact, since 2010 there has been a gradual but persistent decline. 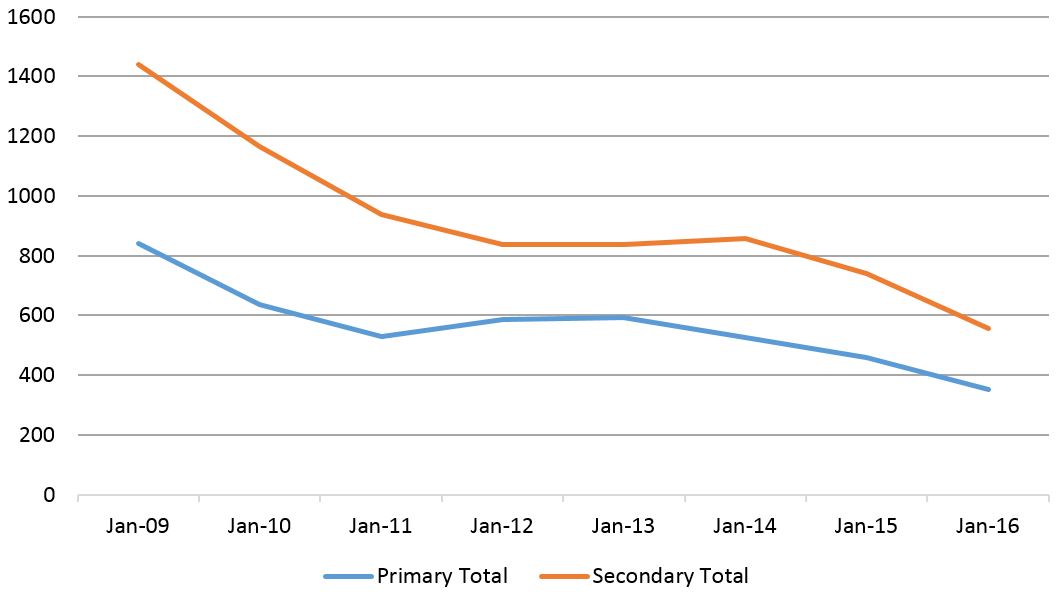 Using the same eight countries as above, Chart 2 shows a stubborn decline in the number of temporary skilled visa holders from these countries living in Australia since 2009. This visa is where an employer directly hires a skilled migrant for a vacant job.

The number of skilled workers (blue line) has more than halved, from 840 in 2009 to 352 in 2016. The associated number of ‘secondary migrants’ (spouses and children, representing by the orange line) has also declined. The vast majority of 457 visa holders from these eight countries come from Fiji and Papua New Guinea. Both countries have seen a dramatic fall from 2009, from 403 to 199 for Fiji and 381 to 109 for PNG.

The declining Pacific trend does not reflect the overall program. In fact, the 457 visa program has experienced relatively strong growth from 2009 to 2016. There were 77,300 primary visa holders in Australia in 2009, growing by over 20 per cent to 94,887 in 2016. This means migrants from these eight countries represent about 0.4 per cent of all 457 visa migrants, down from over one per cent in 2009.

Changing employer demand has shifted the composition of skills away from construction and mining occupations towards service industries. For Fiji and PNG, this appears to explain much of the reduction in sponsored work as over 50 per cent of 457 visa migrants from these two countries work as tradespeople and technicians, more than double the national average. Colin Filer’s blog from 2013 discusses the PNG 457 visa trends in relation to the mining boom here.

As there are no finalised Working Holiday agreements with any Pacific countries or Timor-Leste, this means the share of these citizens on the three main temporary visas in Australia – students, sponsored temporary workers and working holiday makers – is equal to a rounding error.

It’s not only temporary visa pathways. The OECD Database shows that permanent migration from these same countries to Australia is also persistently low: 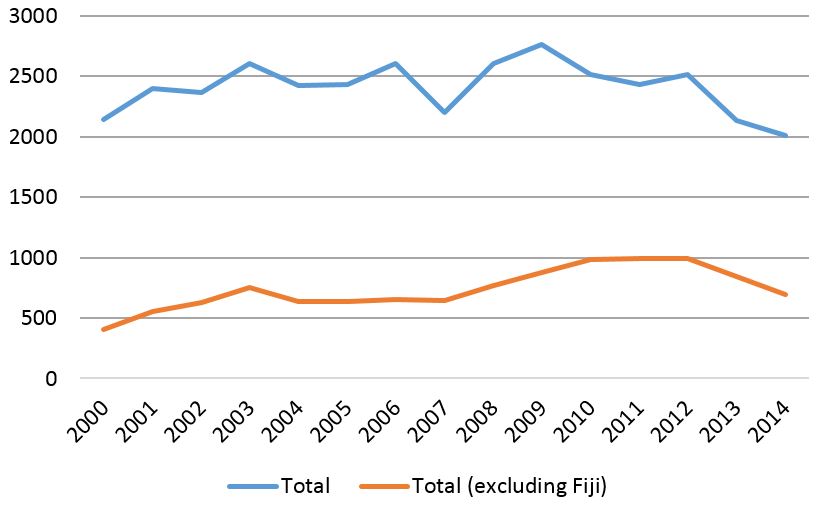 As there are about 190,000 permanent visas available each year, these eight countries represent just over one per cent of visa grants each year. With about half of all permanent visas being granted to people already in Australia on a temporary visa, there is a flow on effect when people cannot access temporary visas in the first place.

It isn’t possible to precisely count how many people born in Pacific countries come to Australia via New Zealand citizenship. However Jonathan Pryke showed in this blog post from 2014, non-New Zealand born people living in Australia who identify as Polynesian, Melanesian or Micronesian grew by 3.9 per cent from 2006 to 2011, a total of 10,372 people. This growth is too large to be made up of only the temporary and permanent visa holders described above and certainly includes people who came via New Zealand. For example, an additional 3852 people born in Samoan were in Australia in 2011 than 2006. Given there are generally less than 1000 Samoans on a temporary visa [pdf] in Australia at any one time, migration via New Zealand is an important part of Pacific migration to Australia.

There are a number of likely barriers preventing more migration from these eight countries through standard migration channels. In new research exploring emigration trends, Parsons et al [pdf] show between one-third and one-half of the trend increase in emigration in a cross-country analysis of developing countries can be explained by changing skill composition with another third due to network effects.

As most of Australia’s standard migration channels require post-secondary education, as well as English language proficiency, it is not surprising people from small developing countries represent such a small proportion of overall immigration to Australia.

This analysis shows standard visa categories are not well-suited to fostering additional migration from the Pacific and Timor-Leste. This suggests bespoke migration programs may be more appropriate to facilitate additional Pacific and Timor migration to Australia. The Seasonal Worker Program is one such example, which has seen strong growth in recent years, as well as the establishment of the micro-states visa. Another option recommended by the Pacific Possible report [pdf] would be the creation of a permanent Pacific Category visa, similar to what exists in New Zealand.