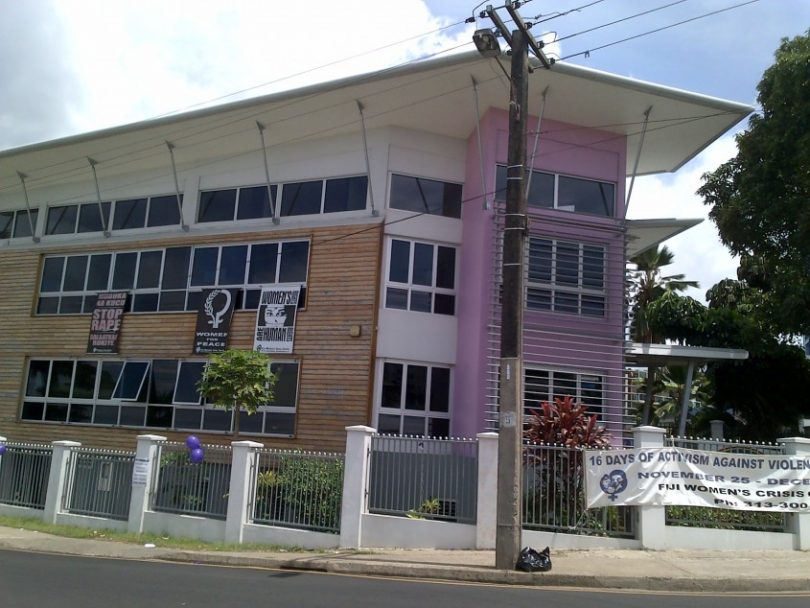 The Fiji Women’s Crisis Centre, or FWCC, is housed in a prominent downtown Suva building, its logo and messages blazoned over its fence and walls. In equal parts service provider, sector trainer and public advocate, the FWCC has been a trailblazer not only in Fiji but in the broader Pacific region since its establishment in 1984. It has done more than any other organisation to get gender-based violence in the Pacific on the agenda, and to strengthen services to survivors.

In Devpolicy’s latest Aid Profile, I attempt to tell the remarkable story of FWCC.

In this blog I reflect on the equally remarkable fact that the Australian aid program has been FWCC’s principal funder almost from the start, beginning in 1990 and continuing to this day.

Australia’s annual support is relatively modest – about $1 to $1.5 million a year. But there are very few projects with this longevity in the Australian aid program, and even fewer with such high returns.

And yet, apart from the fact that it involves the backing a local champion, Australia’s support for FWCC breaches aid orthodoxy. Aid is meant to get things going. It is to invest in change, not to cover recurrent costs, and certainly not to fund the same project for three decades.

If the success flies in the face of orthodoxy, let’s rethink orthodoxy. Here are four lessons I draw from the FWCC story.

One, use the flexibility of Australian aid to provide more funding to civil society. Rather than relying entirely on supply-side measures, use NGOs to put pressure on and work with government to improve performance. Annual funding to FWCC is no more than the cost of a couple of expat advisers.

Two, provide more funding to local civil society. Most of the hundreds of millions of dollars Australian aid provided to NGOs goes to Australian NGOs. Those Australian NGOs often work with local NGOs, but very few of the latter graduate to receive aid funding directly. FWCC graduated quickly from indirect to direct support, and is a role model in this regard.

Three, don’t fetishise government ownership as the Paris Declaration did. The Fijian government has never owned the FWCC, and at times has been hostile to it.

Four, provide long-term recurrent funding. The secret of good aid is to find out what works, and stick with it. Think of aid in terms of decades rather than years. Perhaps three decades should be thought of as a standard time for a successful aid project, rather than three years.

It’s not hard to walk away from an aid project that only runs for a couple of years. Perhaps you’ve achieved what you set out to – build something, train someone. In any case, sustainability is a problem for the host government.

But walking away from a 27-year funded aid project is quite another thing altogether. What should the Australian government do? Threaten to walk away to force the Fijian government to come to the table? Or fund the Centre for another 27 years?

If I was running the Australian aid program, I would certainly put pressure on the Centre to diversify its funding. I would also ask the Fijian government why it doesn’t provide more funding. And, more importantly, get Fijians to ask that question of their government.

Yet I would also be patient. It’s a small amount of money doing a huge amount of good. And a historical perspective is needed. In countries like Australia and the United States, women’s and rape crisis centres were, as in Fiji, started by feminist collectives. The first few started in the early 70s, without government funding. Yet, remarkably, as early as the mid-70s, they were already starting to rely on government support. Why has it taken the Fijian government not three but thirty-three (and counting) years to fund its country’s only crisis centre?

Probably because the West experienced a cultural, including a feminist, revolution in the 1960s and 1970s that almost completely bypassed developing countries such as Fiji. It is clearly going to take longer, much longer, to get the government on board.

In the meantime, advocacy is needed. And that requires independence. From this perspective, aid is not a stop-gap measure, it’s a requirement for success.

While there is of course a long way to go, FWCC and Australian aid, working together over three decades, have fundamentally changed the way in which violence against women is responded to and regarded in Fiji and the broader Pacific. There is a lot we can learn from the FWCC experience about effective aid.

Learn more by reading the full Aid Profile on FWCC, including its history, successes and challenges. Our Aid Profiles series forms the shortlist for the 2018 Mitchell Humanitarian Award, which will be presented at the 2018 Australasian Aid Conference.