As Australians’ income levels have increased over the past decade, so too have their level of public donations. Our previous blog post looked at this using income data from Australia’s international development Non-Governmental Organisations (NGOs). This post takes a different perspective, using data on household giving.

Specifically, we analyse the recent growth in Australian public donations by different groups in society over the period from 2003/04 to 2009/10. We break down donations by household income, wealth, geographic region and age. This analysis relies on results from the two most recent Household Expenditure Surveys (HESs), conducted by the Australian Bureau of Statistics (ABS) in 2003/04 and 2009/10.

As we are reliant on expenditure variables listed in the ABS HES surveys, the definition of “public donations” is not restricted to donations to international development NGOs. Rather, for the purpose of this analysis, “public donations” includes any monetary donation to a charity[1], but does not include donations to religious groups or family and friends.

The data confirms that from 2003/04 to 2009/10 there has been overall growth in public donations not only in monetary terms, but also in terms of percentage of income. In 2009/10 Australian households donated, on average, 0.25% of their weekly gross household income to charity, compared to 0.18% in 2003/04. This corresponded with an increase from the average yearly donations of $125 to an average yearly donation of $222 (in 2010 prices), representing a real increase of 77% over this period.

Figure 2 below indicates that the percentage of income donated to charity has not increased in all income groups, over the period considered. For example, in the lowest and second-lowest income quintile groups the percentage of gross household income donated to charity decreased between 2003/04 and 2009/10. Interestingly, despite the decrease in their donations, people in the lowest income group continue to donate the highest percentage of their income to charity (ignoring the unreliable 2009/10 estimate for the third quintile). The highest income group was the next most generous group in 2009/10, donating 0.25% of their gross household income. However, this has not been consistent over time, with the highest income group donating much less of its income in 2003/04. 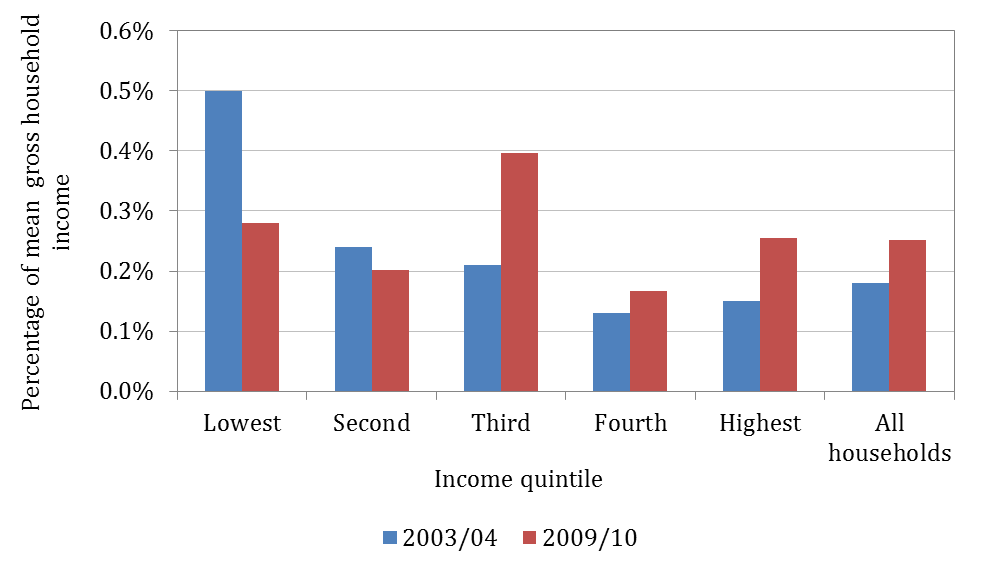 Although there does not appear to be much variation between the income quintiles presented in Figure 2, there is more than one way to measure affluence. Figure 3 uses overall wealth instead of income, and shows a much clearer positive correlation between affluence and generosity. For example, those in the highest net worth group gave 0.51% of their mean gross household income in 2009/10, which is more than double the percentage given by those in the highest income quintile group during the same period. It is also significantly larger than the donations by the fourth net worth quintile group, the second highest net worth group, who donated 0.19% of their gross household income.

The difference in the patterns observed in Figures 2 and 3 serves to remind us that, although we may often think of people with high incomes as also being wealthy, this relationship only partially holds. Further, it illustrates that the distinction is quite important when it comes to charitable donations; higher wealth, rather than higher income, is associated with greater generosity, where generosity is measured by the portion of income donated. 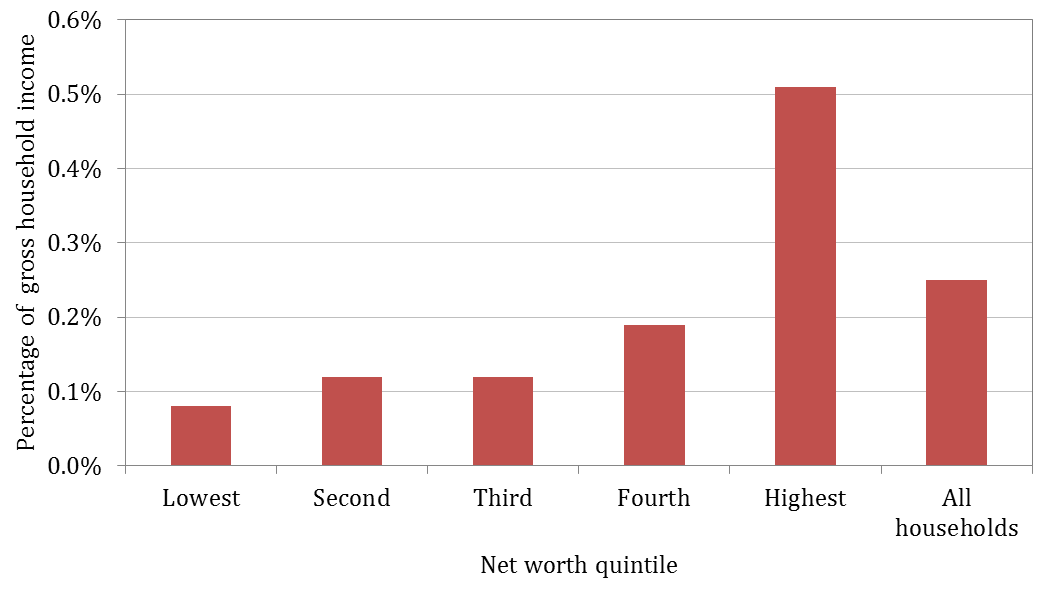 The geographic breakdown of donations in Figure 4 suggests that individuals from the ACT and NSW donated the greatest percentage of their gross weekly income in 2009/10 (ignoring the unreliable estimate for Victoria). Individuals from Western Australia and Queensland donated the least as a percentage of their income in 2009/10 despite the economic booms in both states during this period. In particular, Western Australia is one of the richest Australian states in terms of both income and wealth, but lags behind in terms of donations as a portion of income.

The data on donations by age group is limited to the 2009/10 financial year. Although the data is unreliable for the youngest and oldest age groups, Figure 5 does suggest that older individuals tend to donate more. Since individuals generally accumulate wealth over their working lives, this is consistent with the conclusion from Figure 3 that generosity is influenced by wealth. The 45-54 age group donated the highest portion of income, at 0.34% (ignoring the unreliable estimate for the 65+ age group). 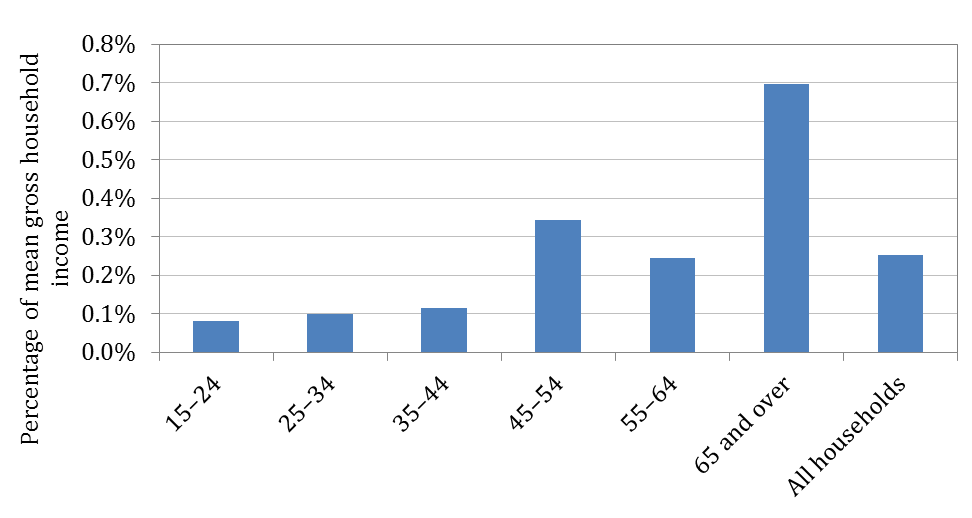 Source: ABS HES 2009/10, author’s calculation
Note: Data for the ‘15-24’ age group and the ‘65 and over’ age group do not meet reliability standard of having a standard error of < 50% of the estimated value, based on ABS guidance.

Overall, the data suggest that the level of public donations varies largely between different groups in society as defined by income, wealth, location and age. A theme running through the various charts is that, as expected, richer people donate more. However, the relationship is a complex one. Figures 2 and 3 show that it matters how affluence is defined; asset-rich people are more likely to donate a higher portion of their income than income-rich people, and these two groups do not perfectly overlap.

The data also indicates that there has been an overall increase in public donations in Australia, both in real dollar terms and as a percentage of income, between 2003/04 and 2009/10. However, it is only households with higher incomes that are giving more as a percentage of their income; lower-income households have on average reduced the portion of their incomes that they donate. It is still not the case though that the richer (in terms of income) are more generous than the poorer, though note that this analysis is in terms of gross income. A very different picture might emerge if the analysis was done using post-tax income

The geographical analysis suggests that Western Australia stands out due to its low donations as a portion of income in 2009/10 accompanied by high income and wealth in the same year relative to other Australian states and territories. Queensland residents similarly donate a small portion of their income on average, although their income and wealth was a little below the average of Australian states and territories in 2009/10.

Overall, the results can be interpreted in different ways. Optimists can point to the fact that Australians are giving almost twice as much in charitable donations as they were a decade ago, even after inflation. Pessimists will note that even with that increase the average individual donation is just $1.60 a week (using the Census figure of an average household size of 2.6 persons), which is about the amount we spend on our pets.

[1] The survey variables used are ‘cash gifts, donations to charity not elsewhere classified’ and ‘cash gifts, donations to charity not further described’.
[2] This is quite similar to the figure for donations arrived at using data on tax deductibility which was $2.2 billion for 2010-11. However, these two figures are not comparable: the tax office figures will include donations from companies and to religious groups; and not all household donations are provided (or claim) tax deductibility.
[3] Income quintile groups defined by gross weekly household income (pre-tax).