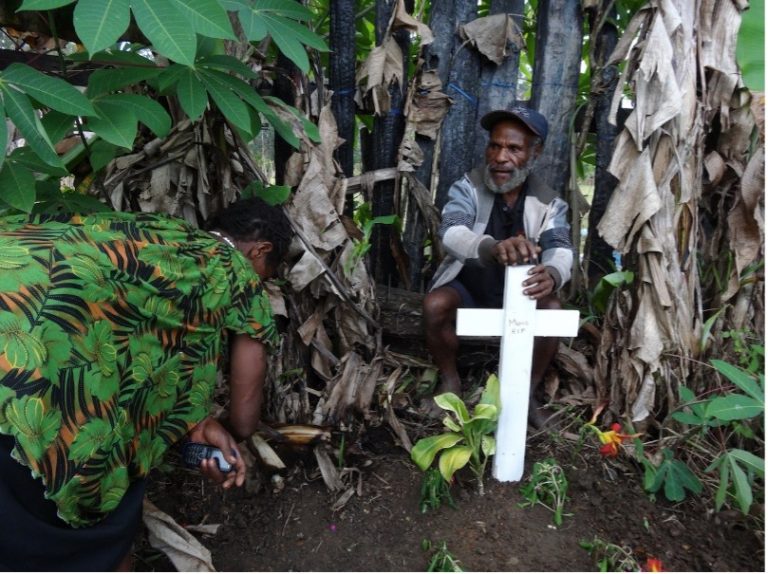 Children as victims of sorcery accusation related violence in PNG

Warning: This blog contains content that is confronting and disturbing

I had just finished a discussion paper about children and sorcery accusation related violence (SARV) when a colleague of mine told me about a recent visit he’d had to a police station.

“I was at the station, arguing with one officer after another about why they should go try to intervene and rescue a citizen of Papua New Guinea who was being tortured” he said. “They had lots of excuses and I was getting more and more frustrated. Just then a young girl came walking along, perhaps eight years old. She overheard us and then said ‘Oh, you mean the woman up at T_______? They tried to force her to eat tinfish, but she didn’t want to, so they stripped her naked and began to burn her with red-hot irons.’ She smiled.”

Many children in PNG witness extreme acts of violence against those accused of using sorcery. For some of them, it is their own parents they watch being tortured or beheaded. In some terribly tragic cases, it is children who carry out the torture on their own parent.

When I first started research into sorcery accusation related violence, I had not thought to include questions about children. But they kept appearing more and more in the stories I was hearing – children watching their family and friends being tortured and killed, children being forced to flee following accusations made against their family and, even worse, children being accused and harmed themselves.

Not even the unborn are safe from danger. Our research team met with a woman who was accused when she was seven months pregnant. During torture, she was burnt with heated metal pushed up inside her vagina. The baby was delivered the next day with burn marks on her and did not survive. The mother wanted to name her baby Maria, so she was buried with that name written in marker on the cross over the grave, as shown in the picture above. You can see the mother to the left of the photo, cleaning the grave site.

When we included children into our study, we learnt three things.

First, children are today being accused of being sorcerers in PNG. This appears to be a new trend, although we cannot be certain as the data on SARV is far from comprehensive. In our newspaper database that covers reported incidents since 1996, children start to appear as primary and secondary victims of SARV from around 2005, but the newspaper coverage is not complete. Both boys and girls are being accused, frequently as a result of one of their parents or close relatives having been accused, due to the belief that sorcery is somehow ‘passed on’ to children. As such, we can characterise SARV as an intergenerational problem, with the stigma associated with accusations passed down through family lines in ways that condemn children to a lifetime of shame.

The following common characteristics of children being accused can be summarised from our data:

There are similar reports of an increase in children being accused of sorcery and witchcraft in many other parts of the world, even in areas where it was traditionally more common for older adults to be accused. In Africa in particular, children are being accused in large numbers and thrown out onto the streets to fend for themselves. A significant factor leading to child accusations in Africa is the role played by contemporary Pentecostal evangelical influences, particularly charismatic pastors who claim to exorcise children. Churches have also played a major role in the United Kingdom in child witchcraft accusation cases among certain African diaspora communities.

Our second major finding is that children form a large class of secondary victims – or those indirectly affected – as a result of SARV. As many as 30% of the cases we documented included effects on children in the family of the accused victim or in the community. The impact of SARV on children’s experiences of school — including being displaced and left out of school, being stigmatised and doing poorly at school — was a frequent theme in interviews.

This finding is one that needs to be taken extremely seriously in current messaging about COVID-19 in PNG to ensure that children’s deaths as a result of the recent Delta outbreak do not trigger a cascade of sorcery accusations and killings. In other words, the death of children from COVID-19 needs to be urgently normalised so it is viewed as being caused by the virus rather than blamed on sorcery.

This research makes clear that much more needs to be done to stop accusations against children being imagined, much less voiced and then acted upon. In this regard, health workers, teachers and school/pastoral leadership can play a primary, active role in engaging, educating and leading populations away from sorcery as an explanation for illness, death and misfortune.

There is ample reason in our research to see the rise in child witchcraft accusations in many sub-Saharan African nations as a sobering warning to PNG to ensure that contagious narratives about children as sorcerers are authoritatively and swiftly dismissed. This important role of correcting false narratives about sorcery and preventing harm to PNG’s children must be actioned by PNG’s educational community, government and religious leaders across every denomination.