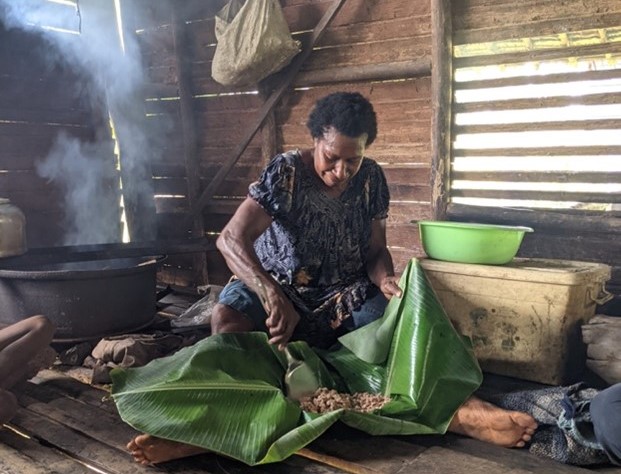 Sago is one of the most important carbohydrates in Papua New Guinea (PNG). It is refined from the sago palm tree (Metroxylon sagu), which is widespread in lowland areas of the country, especially in Western and Sepik provinces. PNG is the second largest producer of sago starch worldwide.

The sago palm is incredibly resilient. It can withstand variations in water availability, salinity, and acidity, and is resistant to most diseases and pests. A fully mature sago palm provides up to 300 kg of starch when the tree is harvested. 100 g of sago provides 86 g of carbohydrate, and it has a low glycaemic index of 27. Since the 1970s, international sago symposiums have promoted investment in sago palm as a reliable food source, and advocated for its expansion.

Unfortunately, this remarkable plant can cause a life-threatening condition known as sago haemolytic disease. First recorded in Western literature in 1974, the exact cause of this condition is unknown. Researchers suspect mycotoxins are the likely culprit. Village sago may be stored in aerobic conditions, allowing fungus to grow within the sago flour, which families then unknowingly consume. During digestion of the mouldy sago, the fungus is broken down within the body, destroying red blood cells (known as haemolysis).

The patients I have seen with this condition present with excruciating abdominal pain, blood in the urine, severe headache, high fever, weakness, and increasing agitation and confusion. While the disease is self-limiting, many patients die without emergency blood transfusions due to the loss of red blood cells. Blood transfusions are difficult to organise in remote aid posts without electricity, running water, radio or phone reception – where we most often see these patients.

Historically, this condition has been rare. The prevalence of sago haemolytic disease was previously thought to be only 5.8/100,000, with a case fatality rate of 35% in the 1988–1998 period. However, in 2021 nine cases were reported at Lake Murray Station, Boboa Health Centre, between January and April.

This surge in cases is concerning. The majority of the population in Western Province rely on sago to feed their families, and any threat to the consumption of sago could seriously threaten food security in the region.

In discussion with local health workers and community members in the Lake Murray area, numerous potential risk factors were identified which they believe may have contributed to the unusually high incidence of cases this year. The community reported they believe they are seeing greater variations in climate, including more severe dry periods followed by heavier rain, leading to unprecedented flooding. Although the sago palm can flourish under these harsh conditions, hand (or foot) preparation of the starch flour requires large volumes of clean water for straining.

Unfortunately, the recent flooding had breached the pit toilets, causing women to discard garden crops that were contaminated by faecal matter. High floodwaters also blocked bush tracks, and flooding of snake burrows had increased the activity of many venomous species, making it unsafe for families to harvest from their bush gardens further away. The floodwaters had also contaminated usual drinking water sources, causing clusters of diarrhoeal disease. This prevented the community from using their usual water sources for sago straining, meaning fresh sago could not be prepared.

The combination of these factors caused an acute food shortage. Families were reliant on sago already stored in the home.

Women’s leaders reported they knew that they should not keep their sago for more than one month, but the scarcity of food had forced them to use sago that had been stored for more than three months to feed their families. Women reported confidence in assessing the texture, dryness and smell of the sago to determine its safety for eating, but when they had no other food, they were willing to ignore some of the red flags.

The most common method of storing was in an old plastic tub or container in the cooking house. There was widespread knowledge of traditional wrapping of sago in banana leaves and tightly binding, which is more anaerobic than keeping the sago in tubs. Unfortunately, this older, more labour-intensive method had fallen out of fashion, likely increasing the risk of mycotoxin fungus growth.

Climate change is likely to worsen this problem, and may already be doing so. Drought will limit the water available for straining sago, while flooding often contaminates the water making straining unsafe. It is an incredibly frustrating position for the Western Province population, who consistently record shocking malnutrition rates, especially for chronic stunting. Without interventions to safeguard sago use, this chronic malnutrition may be exacerbated in the future.

Reassuringly, solutions will likely be indigenous to PNG. Sepik populations store their sago in anaerobic conditions (sometimes underwater in clay pots), which prevents fungus growth, and they are more likely to boil their sago, killing off pathogens. In comparison, Western Province families commonly fry their sago to make bipapi, a thick pancake, that can contain undercooked flour.

Funding cultural exchanges of agricultural officers from Sepik areas to Western Province, to provide awareness on alternative storage and cooking techniques for sago, could be an efficient way to tackle this deadly condition. Cultural and behavioural change is difficult, but sincere investment in addressing the storage and preparation of sago will save lives.

In conclusion, the climate will continue to change, and Pacific Island countries will continue to be one of the most affected regions. Sago haemolytic disease has previously been too rare to come to the attention of the policy community, however, we cannot ignore the threat to such a reliable food source. Investment in awareness and research into safe sago storage and preparation would safeguard this resilient starch.

Mikaela Seymour is a medical officer working in Western Province, specifically remote Middle and South Fly villages. She is a member of the Australia-PNG Network and has previously worked for Australian Doctors International and Rural Medical Education Australia in PNG.