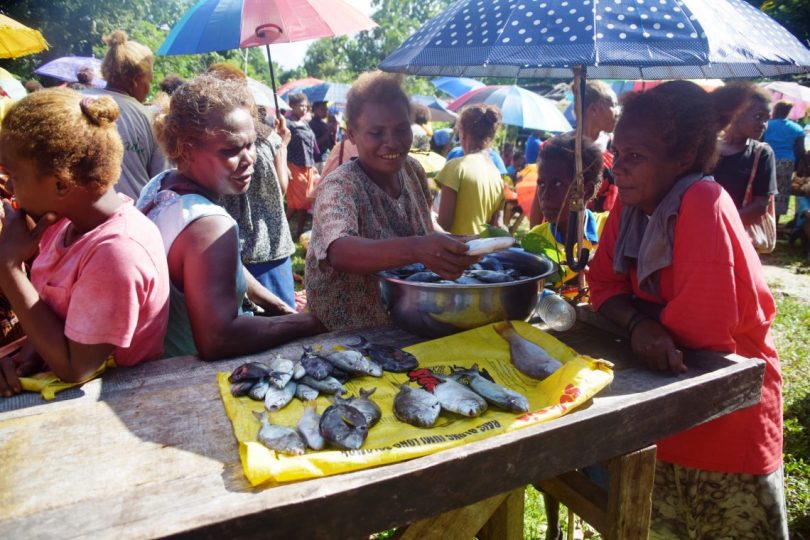 The Pacific region is no stranger to sudden shocks. Vanuatu and Solomon Islands, for instance, are respectively ranked one and three as nations most at risk from natural hazards and societal vulnerability. Although the COVID-19 pandemic has so far not created a direct health crisis in most of the Pacific, governments and regional institutions have responded to the situation. The governments of the Solomon Islands and Vanuatu have instituted shutdowns, closed borders and encouraged migration of people from urban to rural areas.

Almost everyone in the Pacific eats fish regularly, but most people are not fishers. Fish is caught, distributed and then acquired by consumers through purchase, gifting or bartering. We estimate through our research at Auki Market in Malaita, Solomon Islands, that well over 100 t of fish caught across the province changes hands at the market in a year. This system of producing and distributing fish connects remote sources of supply with urban areas of demand and generates indispensable value, both in the form of fish-based livelihoods for the many people involved and in terms of food and nutrition security in island populations. From experiences in Vanuatu and the broader Pacific region, we know that fish and fish-based livelihoods play an important role for both food and income when recovering from hardship and disruption. But how are fisheries faring amid the current coronavirus-induced economic recession?

Recently, teams working under a coastal fisheries development partnership between national fisheries agencies, WorldFish and the Australian National Centre for Ocean Resources and Security (ANCORS), sought to quickly appraise the situation in rural villages in the two countries. Twenty villages were surveyed in the Solomon Islands’ two most populous provinces – Western Province and Malaita. In Vanuatu, 23 villages were surveyed across all provinces to ensure representation across three coastal contexts that range in degree of connectivity, including outer islands, secondary islands and capital islands. Staff from local offices contacted men and women leaders in communities to find out whether food supply was sufficient to feed the large numbers of people migrating back to villages, the role of fish in feeding people, and the role of community-based fisheries management in responding to the situation and promoting resilience.

We found that increasing internal migration to and among rural villages is influencing strategies for food production and distribution: 46% and 55% of respondents in Solomon Islands and Vanuatu, respectively, stated that there is not enough food. Increasing agricultural production focusing on fast-yield root crops was a key strategy to address the situation reflecting the strong agricultural practices and fertile growing conditions in high-island Melanesia. Temporary access for new arrivals to cultivate land by landowners, reducing sales of food to supply the household and bartering food were also noted. Increased fishing effort was reported by almost half of the respondents in Solomon Islands and two-thirds of respondents in Vanuatu. The local production of root crops and fish is central to the Melanesian island food system during this period of disruption.

The provincial food markets of Auki and Gizo and other village markets in Solomon Islands have been largely able to continue to trade in the past few months. In contrast, all informal markets in Guadalcanal in and around Honiara were closed. About a quarter of respondents reported reduced local fish trade, and explained in many cases that this was due to lack of cash among buyers. In Vanuatu, respondents in more remote islands reported increased debt as limitations on travel between islands meant goods could no longer be traded and there was less cash in circulation. Changes in village economies appears to be impacting on food distribution.

As school students and urban dwellers returned to the villages there has been an increase in the numbers of inexperienced farmers and fishers attempting to provide food. In a minority of cases in the Solomon Islands this led to theft. While few people returning to villages had the equipment or know-how to get out and fish, there were increased reports of gleaning (gathering marine species by hand along the seashore). Gleaning is traditionally an activity for women and youth in the Pacific. In the Vanuatu cases reporting significant population influx, this led to intensified pressure on immediate coastal zones around villages. However, in the Solomon Islands a more commonly reported issue was flare-ups in pre-existing local conflicts (such as conflict between tribes over elections, crimes and other arguments present in 15% of the communities consulted), leading to the breakdown of community fisheries management.

On the other hand, in both Vanuatu and Solomon islands, communities with functioning community-based fisheries management reported spreading awareness about the rules among returning people to try to prevent infringement. Some had increased enforcement, while others had taken measures to increase access to fish in the face of the crisis. For example, one site in Solomon Islands had organised a community harvest of fish in order to self-fund supplies for their local clinic, and four sites in Vanuatu had opened tabu areas (closure areas) temporarily for fishing following impacts felt from COVID-19 and Tropical Cyclone Harold.

More research is needed in order to fully understand the impact of the current economic crisis and population movement on fisheries, food and nutrition security, including more analysis of the impact on women and youth. The Australian Centre for International Agricultural Research (ACIAR) is supporting such integrated food systems research and strengthening national programs of coastal fisheries management and livelihoods. A recent synthesis of food system impacts in the Pacific under this program highlights the food and nutrition security vulnerabilities caused by increased importation of staple foods and declining agricultural production.

There are local initiatives that can be springboards for interventions intended to promote food security and resilience in relation to fisheries today. First, supporting low-cost methods of increasing local fish catches (such as fishing aggregated devices or FADs) can help take pressure off some fisheries. Second, distribution and use of resources on fish storage and hygiene are more important than ever. Fish storage facilities have proven an effective livelihood intervention for women in particular and rural communities in general, and also contribute positively to nutrition security (a key concern when one in three Solomon children is stunted). Third, while community-based fisheries management committees may not be the first place people turn to when thinking about resilience or economic shocks, they can play a valuable role in food security and help balance short-term needs and long-term sustainability. This form of social capital can be important in community resilience when recovering from natural disasters.

There are several resources available to support local management, along with advice from national and subnational government. Inclusive management tends to have better outcomes for equity and sustainability and this should be borne in mind. Considering gender and facilitating for inclusion will enable the effects of interventions on fisheries to be better spread and more durable amid shocks. National and provincial governments in Solomon Islands and Vanuatu will continue to support community-based fisheries management through their programs towards the goals of national fisheries policies (Solomon Islands and Vanuatu), which have a strong focus on community-driven approaches.

As COVID-19 wreaks havoc in the world, even in absentia as it does in the Pacific, fish and fisheries will be ever more important in many places. In Solomon Islands’ rural areas, for example, 68% of households catch fish or shellfish and even in urban areas a third of households are engaged in fishing of some sort. Fisheries then becomes a key part of poverty reduction, poverty affecting approximately one-quarter of all Solomon Islanders prior to the current downturn, and projected to rise anywhere from 2 to 12 percentage points. Consideration of COVID-19 responses and related projects must turn an attentive eye to these households in coastal villages to better understand the impacts of this latest shock to food security in the region.

Hampus Eriksson is a Senior Scientist at WorldFish in Solomon Islands and an Associate Professor at the Australian National Centre for Ocean Resource and Security at the University of Wollongong.

Dr Anouk Ride is a Scientist at WorldFish in Solomon Islands.

Delvene Boso is Country Manager for WorldFish in Solomon Islands.

Dr Dirk Steenbergen is a Senior Research Fellow at the Australian National Centre for Ocean Resource and Security at the University of Wollongong.

Pita Neihapi is a Fisheries Officer and the community-based fisheries management team leader at the Vanuatu Fisheries Department.