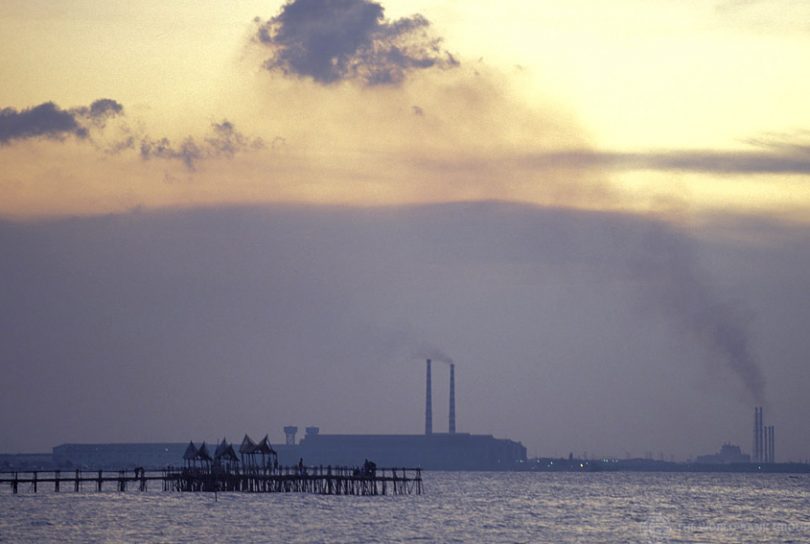 Indonesia has made commitments to reduce emissions by 29% by 2030 (Credit: World Bank/Flickr CC BY-NC-ND 2.0)

The adoption of the Paris Agreement in 2015 cemented a shift towards universal participation in the global effort to mitigate climate change. In contrast to the Kyoto Protocol, which only required developed countries to adopt legally binding commitments, the Paris Agreement mandates that both developed and developing countries put forward Nationally Determined Contributions (NDCs) towards the Agreement’s goals every five years. So far 195 countries have submitted an NDC (or its predecessor, an Intended NDC or INDC), covering the vast bulk of global greenhouse gas emissions. Many countries plan to submit an updated NDC by 2020.

Recognising the vast differences in countries’ capacities to address climate change, a key feature of the Paris Agreement is a renewed commitment by developed countries to mobilise financial and in-kind support for developing countries’ efforts. A decade ago, developed countries pledged to mobilise US$100 billion a year in climate finance by 2020. This target was later extended through to 2025, by which time a new and higher target will be negotiated.

In the meantime, no less than 136 countries have made their NDCs partially or wholly conditional on receiving one or more types of support (climate finance for mitigation or adaptation; technology transfer; and capacity building). Examples of conditional NDCs in the Indo-Pacific region include Cambodia, India, Indonesia, Kiribati, Papua New Guinea, Solomon Islands and Vanuatu.

While most developing countries include unconditional measures in their NDCs, there’s still a significant difference between how far developing countries collectively are willing to scale back their emissions unconditionally and what they make conditional on support. Indonesia, for example, has set an unconditional target of reducing its emissions by 29% compared to business as usual by 2030, and a conditional target of up to 41%. Without adequate support for the conditional component, it will be even harder to close the gap between current levels of emissions and the much lower levels needed to keep temperature rise under 2 degrees Celsius beyond pre-industrial levels, let alone 1.5 degrees Celsius.

Conditional NDCs have mixed implications for the Paris Agreement’s chances of success. On the one hand, the conditions can be a foothold for equity if they help to ramp up support for NDC implementation in lower-income countries that have contributed little to global emissions. On the other hand, if developed countries can’t summon up the political will to boost support – not least in the US, which has scaled down its climate finance in recent years and plans to exit the agreement – this could prove to be the Agreement’s Achilles heel. Our new open access paper in the journal Climate Policy addresses the implications of this tension between equity and feasibility.

Based on data from the NDC Explorer, an online tool to visualise and compare the information contained in NDCs, we find that the feasibility of NDC implementation is challenged because developing countries often don’t define conditions clearly. Moreover, the cost of implementing all conditional contributions far exceeds the existing $100 billion target pledged by developed countries. Even in the unlikely event that this entire amount is used for NDC implementation, $100 billion would cover the total costs of the fully conditional NDCs but only about 23% of the partly conditional NDCs.

The Paris Agreement includes important provisions to guide equitable allocation of support by prioritising Least Developed Countries (LDCs) and Small Island Developing States (SIDS). NDCs reflect these priorities, as a higher proportion of LDCs and SIDS have conditional NDCs than other countries. However, our analysis also reveals significant differences between existing patterns of climate-related Official Development Assistance (ODA) and those implied by requests under conditional NDCs, particularly for adaptation.

Two trends are apparent across adaptation and mitigation finance, as shown in Figure 1 below. First, while the likelihood that a country will make its NDC conditional decreases with income, this trend doesn’t clearly match the allocation of existing climate-related aid. Currently, only high-income countries are noticeably less likely to receive climate-related aid than other income groups. Upper-middle income countries show the biggest gap between requests and receipts. Second, the share of countries that make their NDC conditional is always lower than the share of countries that have received support for mitigation or adaptation for every country grouping except for mitigation finance received by high-income countries. These divergences mean that supporting NDCs may require a significant shift in developed countries’ priorities for allocating climate finance. 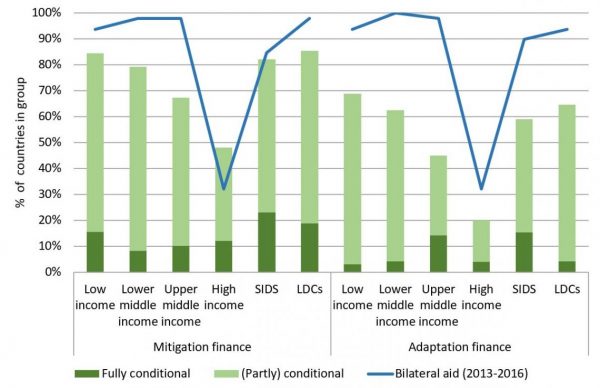 As a result, we expect that tensions between feasibility and equity may arise in efforts to implement conditional NDCs. The tensions and risks associated with conditionality can be addressed in at least four ways.

First, countries should build shared understandings about what aspects of contributions could be conditional. Given that the Paris Agreement is premised on universal participation, it is reasonable to expect that most parties’ NDCs would at least have an unconditional core (including for example zero- or negative-cost measures). The 2018 ‘rulebook’ for the Paris Agreement leaves the issue of conditionality unaddressed. NDC guidance will be revisited in 2024 and offers a chance to fix this omission.

Second, in order to implement current NDCs, countries requesting support should flesh out what kinds of support they need. They should set out more credible cost estimates and have sufficiently detailed and feasible investment plans in place.

Third, developed countries should scale up capacity-building to support the preparation of future NDCs in developing countries, including the identification of low-cost contributions and estimating implementation costs. Some arrangements have already emerged that explicitly aim to support NDC implementation, including the NDCs Partnership, a global initiative that includes a Pacific regional hub, both of which are supported by Australian aid.

Finally, developed countries should orient climate finance explicitly towards supporting developing countries’ efforts to implement their NDCs. When updating their NDCs, countries in a position to provide support could add informative outlines of their plans.

Outlining intended provision of support would be an important step towards making global cooperation on climate change more equitable. It would also reassure developing countries that they will have the means to raise the ambition of successive NDCs and to implement them successfully.

The research on which this post is based was presented at the Australasian Aid Conference in February 2019. The research is part of a forthcoming special issue in the journal Climate Policy on ‘Making climate action more effective: lessons learned from the first Nationally Determined Contributions (NDCs)’.

Pieter Pauw is a Senior Project Manager at the Frankfurt School of Finance and Management.

Shikha Bhasin is a Programme Lead at the Council on Energy, Environment and Water, India.

Paula Castro is a Senior Researcher in the Department of Political Science at the University of Zurich.