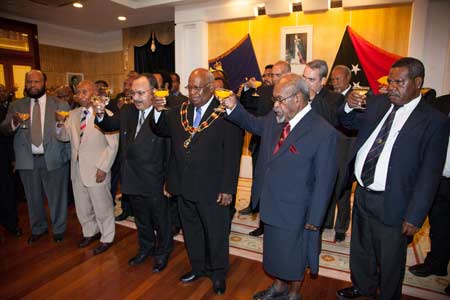 Papua New Guinea’s (PNG’s) incoming government will inherit an economy buoyed by a decade of rapid economic growth and poised to reap the benefits of its vast natural wealth. Emerging from a state of near bankruptcy in 2001, real $US per capita income has risen by 150% – recovering the lost ground made during the volatile 1990s – and private sector employment has more than doubled. This year ADB projects economic growth of 7.5%, supported by a $US16 billion liquefied natural gas (LNG) project, now entering its peak construction phase, high government spending and commodity prices. Business is also booming. A recent survey of PNG’s top 100 Chief Operating Officers (COOs) found that 90% expect company profits to be higher in 2012 than in 2011, with none expecting a decline. Two thirds said their 2011 profits had exceeded expectations. With over $US27 billion, equivalent to 190% of 2011 GDP, expected to be invested in the mining, oil and gas sector before the end of the decade, PNG’s medium term growth outlook is strong.

Part of this economic success has been due to high commodity prices for mining, oil and agriculture exports boosting government revenues, stimulating output growth and buffering the economy against some major global economic shocks.  It has also been a result of better policies. Sensible monetary and fiscal policies have combined with structural reforms in financial services, telecommunications and aviation to boost business investment and encourage economic diversification. In June 2012, the International Monetary Fund downgraded PNG’s risk of sovereign debt distress from moderate to low – the first time PNG has achieved this rating.

The benefits of strong economic growth are being undermined  by rising inequality.

But PNG’s macroeconomic success masks a growing sense of unease about the distribution of the benefits of growth and the government’s ability to translate wealth and macroeconomic stability into better public services. Progress has been made in some areas. The proportion of the road network classified as being in ‘good’ condition has risen from 10% in 2003 to 33% in 2011, and under-5 mortality rates have fallen in many provinces. However, available evidence suggests that many areas of core public services have deteriorated over the last decade, particularly in rural and remote areas. PNG is one of a handful of countries not on track to meet any of the Millennium Development Goals[pdf].

Rising inequality is partly a result of constraints on diversified business investment. Whilst the stock of private sector employment has doubled over the last decade, ADB estimates show that less than 5% of the population, (or roughly 10% of the working age population) are currently able to earn a wage in the formal economy.  PNG’s COO survey highlights that a shortage of skilled labor, poor law and order, lack of technical expertise, unreliable utilities from state owned enterprises (SOEs) and the poor state of transport infrastructure impose major barriers on investment in the more labor intensive and pro-poor, non-mineral economy. These constraints combined with rising firm profitability, have led to a dramatic outflow of investment funds from PNG over the last decade. For example, PNG’s investment in Australia reached $US1.2 billion (equal to 12.8% of GDP) in 2010—350% higher than the amount of money invested by Australian companies in PNG.

High inflation also undermines the inclusiveness of growth. Although wage earners can negotiate higher wages when costs rise, the roughly 85% of the population reliant on cash crops for their semi-subsistence livelihoods have seen their purchasing power deteriorate rapidly in recent years. Structural constraints in land and housing markets have restricted the supply response to rising property demand and contributed to sharply increasing rental prices. As a result, a growing portion of urban residents are now forced to live in informal urban settlements, which have poor access to power and sanitation facilities, and significant security risks.

PNG’s booming mining sector is creating growing inequalities at the village level as well. With low education and financial literacy, members of some segments of the PNG population find it difficult to hold leaders to account for the equitable distribution of mining royalty payments. A particularly difficult challenge for government during the next 12 months will be managing the 8,000 local workers who will begin to be retrenched from the LNG project. Landowner groups are now highlighting the potential for social unrest if alternative work arrangements for their workers cannot be found.

The Government’s ability to confront these challenges will be tested by a tightening fiscal envelope.

Contrary to some public expectations (spurred on by LNG and election rhetoric), the new government will have to manage a period of much slower growth in government revenue. Later this year, the Government will finalize its third Medium Term Fiscal Strategy (MTFS 2013-2017) which will play an important role in establishing the fiscal rules required to balance PNG’s large social and physical infrastructure investment needs with maintaining the macroeconomic stability that has underpinned the last decade of economic growth. However, maturing mining and oil operations will contribute to a 5 to 10% decline in real government revenue between now and 2014. The addition of LNG revenues in 2015 will help, but as a result of generous taxation concessions, these revenues will not peak until after 2020. Current expectations are that there will be zero net savings made within the newly created Sovereign Wealth Fund during the next 5-year MTFS period.

Adding to this fiscal challenge is the already low level of revenue per capita the PNG government is able to generate – which at $US650 per capita is amongst the lowest in the South Pacific. To put this in perspective, if revenues expected at the projected peak of LNG production in 2028 were added to the 2011 national budget, PNG government revenue per capita would still be below that of Tonga, Samoa and Fiji.

Three main factors contribute to PNG’s low government revenue per capita. Firstly, only 5% of the population is engaged in formal private sector employment, which gives the government a small income tax base. Secondly, as a result of tax concessions and the abandoning of the additional mining profits tax in 2003, the average effective tax on PNG’s mining, oil and gas companies is now on the low side of fiscal regimes across the world. The recently opened Ramu Nickel and Cobalt mine has a ten year tax holiday before it will contribute to national revenue. Many other similarly beneficial concessions have been made to firms across the sector. Thirdly, PNG suffers from poor tax compliance and enforcement. The PNG tax office lacks the manpower and resources to effectively pursue individuals, firms and industries it suspects of not paying full tax obligations.

Structural reforms will contribute to more inclusive growth, as would a review of resource sector taxation arrangements.

PNG has achieved remarkable economic revival over the last decade.  A large pipeline of mining, oil and gas investments will underwrite strong economic growth for a number of years to come. However, if present trends continue, this growth is likely to benefit only a small percentage of the population.

In addition to addressing long standing issues of expenditure quality, the incoming PNG government will have to manage a growing need for fiscal austerity. Expenditures will be usefully focused on the rehabilitation of existing service delivery infrastructure, rather than the creation of new assets, which may further undermine the ability of the state to fund recurrent maintenance. Strengthening revenue compliance and reviewing resource sector taxation arrangements would help to alleviate some fiscal pressures over the medium term.

Improving the inclusiveness of economic growth over the next decade will require re-invigoration of the microeconomic reform agenda to strengthen competition, lower barriers to new business, and stimulate growth in the non-mineral economy. To complement these efforts, there must also be a renewed effort to improve the quality of service delivery by SOE’s through the creation of more accountable, performance orientated, management structures, and greater private sector participation.

The 2012 National Budget targets a number of these reforms, outlining plans to restructure SOE governance and accountability frameworks. If these initiatives can be implemented by PNG’s new government, they will go a long way to creating the enabling conditions for much faster growth in the non-mineral economy. This will be a crucial step, not only in avoiding the potential pitfalls of becoming overly reliant on commodity exports, but also in improving the range and quality of employment opportunities for the people of PNG.

Aaron Batten is the ADB’s Country Economist at the Port Moresby Resident Mission.