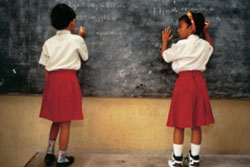 “It’s time for the debate over the aid program to move on”, wrote Stephen Howes in a Development Policy blog on August 12, 2011. Using evidence, Stephen refutes a widely held belief that too much government funding is given to private contractors to run Australian aid projects and he observes that the Indonesia schools program is the “best example” of Australia giving more of its aid directly to recipient governments.

Much of the evidence we have about aid projects comes from evaluations. “By placing evidence at the centre of policy debates”, argues David Slattery in another recent Development Policy blog on August 7, 2011, “… good evaluations can help to foster a more informed and progressive public debate. With the aid program set to become one of the single largest sources of discretionary spending in the Federal Budget this will be critical to building public confidence in the aid program and its management”. So, what can evaluations tell us about the claim that the Indonesia schools program is the “best example” of direct Australian aid to recipient governments?

According to the AusAID document, Australia’s Education Partnership with Indonesia[pdf], Australia is committed to spending around AUD$222 million in earmarked budget support to Indonesia for junior secondary school construction. This commitment follows the construction of over 2000 schools through the earlier Australia-Indonesia Basic Education program (AIBEP). The AusAID document notes that Indonesia has now adopted the AIBEP asset management and maintenance manual as Government recommended practice for school maintenance, and has distributed this manual to districts across the country.

Much of the evidence about Australian aid in Indonesia comes from evaluations supported by AusAID and its contractors. Two such evaluations can help to understand some of the outcomes so far of the schools construction program – the Independent Completion Report of the Australia-Indonesia Basic Education Program and the Summary Report AIBEP School Survey, 2010-2011[pdf].

Is school construction support justifiable in Indonesia at its present stage of development? Is Indonesia really unable to fund school construction from its own budget when, for example, it allocates so much of its budget to subsidising the sale of fuel? These basic questions need answers yet a convincing case that school construction is an effective way to assist in educational development remains to be demonstrated. Even if such a case can be made, should Australia be spending money on an activity that is, on the evidence in these evaluations, not sustainable?

The Independent Completion Report (ICR) flags a warning that school construction may not be sustainable: “Maintenance of new school facilities and provision of budgets that can cover this together with teaching materials and books remains a concern” (p.iii). This warning is consistent with the finding of the AIBEP School Survey, 2010-2011. This provides data showing that less than half of the surveyed schools supported by AIBEP include provision of funds in their annual budget for school repairs and maintenance (section 3.5.4). This suggests that the Australian maintenance manual has had a limited impact on government practice.

A second issue is the matter of how donors and the government of Indonesia can reliably know where these new school assets are actually needed. The very poor quality of Indonesian data is widely understood to be an impediment to good planning including by AusAID itself. Citing the World Bank’s 2007 Public Expenditure and Financial Assessment that determined Indonesia’s sector level data collection to be medium/low the AusAID document, Australia’s Education Partnership with Indonesia on page 31 notes the need to improve data collection and management to provide timely and accurate data in order to inform policy and program choices. Only now are some districts beginning to get a reasonably accurate understanding of the educational assets they have, their school demographic data, and therefore their need for new schools – if any. This understanding is occurring through aid-supported data management tools and analytical skills development. So, how can AusAID have reliably known where to build new schools to meet actual needs in the past?

The claim that aid implementation through government worked “very well” in the Indonesia Basic Education Program is undermined by the following remarks in the ICR about the school construction program:

“An issue raised by the Ministry of National Education and some development partners for future education programs was whether more emphasis should be given to refurbishment of existing schools rather than constructing new schools. Indonesia has approximately one million classrooms, with 30-50% of these in need of repairs or refurbishment. The cost to refurbish schools is approximately 55% of the cost to construct new schools. AusAID and other development partners need to examine whether rebuilding of schools nationwide, and extending facilities by adding laboratories and libraries, would have a greater impact than expanding the number of schools (p.iii)”

“It is understood that there has been no formal review of the structural design [of school buildings] to confirm extent of earthquake resistance, however the design appears to be more resistant than comparable regional buildings. The use of a standard structural design solution across all regions irrespective of site conditions remains a concern… (p.4)”.

“School site selection was an issue that led to challenges beyond the anticipated expertise … With respect to construction criteria only, it appears that sites were often chosen based simply on availability, e.g., the site may have been ‘less desirable’ vacant public land or unproductive land donated by a benefactor. Other factors such as proximity of rivers and main roads need to be considered – for example, at one school site visited it was found that some nearby students did not attend due to an extremely busy highway between. At another site, the new school was located approximately 100 metres off the access road – sites fronting the access road were above flood level, but not the school site; this particular site is flooded with up to two metres depth for seven months of the year. (p.7)”

“As noted, some sites were not ideal for school construction. Some exceed minimum allowable slopes; some are adjacent to natural (e.g., abutments) and other manmade hazards (e.g., busy roads). The District was responsible for site preparation prior to construction, but this did not always occur due to limited District financial and human resource capacity. Typically, drainage and essential landscaping to school sites was incomplete at the time the school becomes operational. (p.7)”

These comments from the ICR, plus the data from the AIBEP School Survey, 2010-2011, do not, of course, indicate that the project failed, but they do cast doubt on the proposition that the school construction program was working “very well”: doubts about sustainability are raised; there are doubts whether the government believes that construction is better than refurbishment; and serious concerns about design and site selection are raised in at least two of the 11 schools visited – a very high proportion of schools visited indeed. School construction in Indonesia at this time might be good for donor visibility and publicity, and it does make schools available for some children, but there is clear evidence from the evaluations here to cast doubt on this aid modality working “very well”.

If this is the “best example” of funding to recipient governments then I think we have much to be concerned about with this direct aid modality for educational development in Indonesia at this time. Fortunately we now have some evaluative evidence upon which to debate our concerns.

Robert Cannon was Director of the Advisory Centre for University Education at the University of Adelaide and is now a consultant in educational development. He is currently working with USAID on evaluation studies in Indonesia and Palestine.