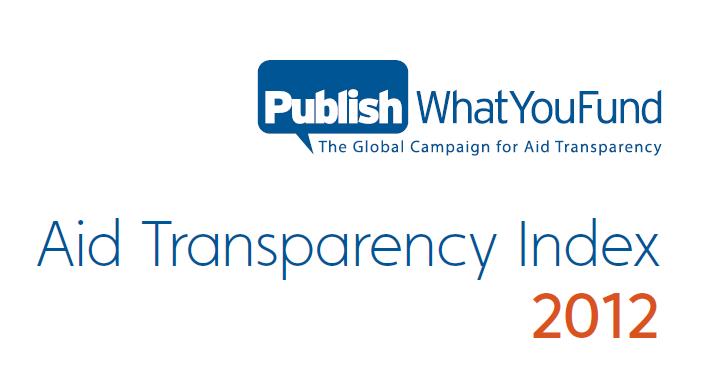 Publish What You Fund has launched its 2012 Aid Transparency Index (available here), ranking 72 donors in terms of their overall transparency. The ranking system uses 43 indicators (listed on page 107 of the 2012 report [pdf]) of transparency.

Nearly all donors (notably excluding Germany’s KfW and Ireland) have improved their scores since the 2011 pilot (where 58 donors were ranked and 37 indicators were used) and some by considerable margins (Australia and GAVI more than doubling their scores, and New Zealand coming very close). DFID also rocketed from 5th place in 2011, with a score of 63, to 1st in 2012 with a score of 91, an impressive feat for someone already at the top of the spectrum.

While Australia’s improvement in its score (as predicted in this post from the start of the year) is impressive, and reflects its new transparency push and transparency charter, it is interesting that New Zealand maintains a slight lead in the transparency stakes.

The first was the 67th Session of the U.N General Assembly, which included the first meeting of the high-level panel on the post-2015 global development agenda, a roundup of which is available here. Debates about what should be included in the framework are already in full swing. For opinions on what the next framework should include see Jeffrey Sachs views here (and discussed on our blog here), this recent piece by CGD’s Charles Kenny and this op-ed piece by Vinod Thomas of the ADB. To read more about the real impact panels of this nature have check out Robin Davies’ excellent post.

The 2012 Clinton Global Initiative Conference took place in the same week, bringing together many high profile global leaders (for a good critique of the forum read this article). The 2012 Social Good Summit also took place, looking at the role new media and technology can play in achieving social goods. The proclaimed outcomes from the Summit can be found on the Summit’s blog page.

Devex has provided a comprehensive roundup of presentations, speeches, and opinions from all three conferences here.

A recently released [pdf] UNICEF report highlights the risk of failing to reach the 2015 global child mortality targets, stating that the world needs “an an annual rate of reduction of 14.2 percent for 2011–2015, much higher than the 2.5 percent achieved over 1990–2011.” The target for MDG 4 was a reduction in child mortality by two-thirds in 2015. Only 15 out of 66 countries with high under-five mortality rates are currently on track to meet the MDG 4 deadline. Significant progress has been made with a decrease of 41% in child mortality between 1990 and 2011 (presented earlier in this blog as the best story in development) suggesting that the original goal might have been simply unrealistic.

New research by InterMedia analyses perceptions of aid from over 4000 participants. The results are discussed in this blog post.

The Asian Development Bank launched its 2012 Asian Development Outlook Update focusing on the growing role of the service sector in developing Asia. The report also forecasts a prolonged period of moderate expansion for the region amidst an ongoing slump in global demand.

The World Bank’s 2013 World Development Report was released this month (report available here), with a focus on employment growth. A transcript from the media briefing can be found here.

Andrew Norton, Director of Research at ODI, discusses the potential end of the Gleneagles Consensus in this recent blog post.

J. Brian Atwood, chair of the OECD DAC, analyses the process and achievements of the Fourth High-Level Forum on Aid Effectiveness, Busan 2011, in this recent CGD essay.

Oxfam has released a new report, ‘Our Land, Our Lives’ highlighting the massive acceleration of global land sales (‘land grabs’) in the past decade. The report highlights the WB’s role in land investment and calls for an immediate freeze on activities. The World Bank has responded here.

The first meeting of the Aquaculture for Food Security, Poverty Alleviation and Nutrition Project (AFSPAN) was held in Penang, Malaysia on September 10 -13. AFSPAN is a partnership of over 20 development agencies and research institutions to improve the aquaculture sector’s role in global efforts to improve food security.

The 13th World Knowledge Forum is taking place this week, including a debate on the recent book ‘Why Nations Fail’ (discussed extensively on our blog) between the two authors.

ActionAid, IDS and Womankind jointly produced a new report [pdf] on the role of women in peace building initiatives.

World Vision and Save the Children launched a Nutrition Barometer [pdf] on September 26 in an attempt to hold countries and donors accountable to their commitments to tackle malnutrition.

UNHCR has called for more funding as it faces an ‘unprecedented’ combination of refugee crises.