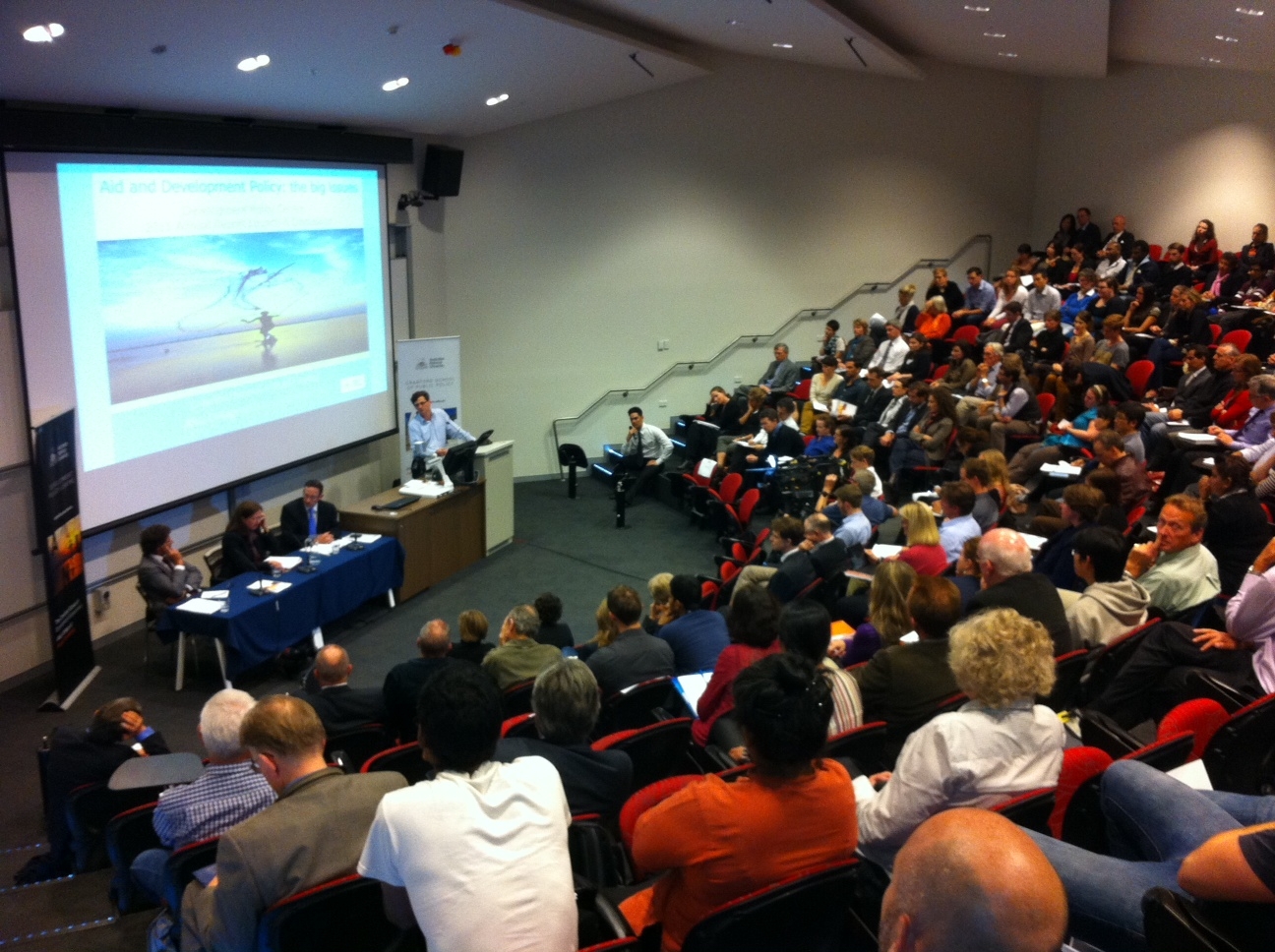 Good afternoon everyone. Thank you for coming to this launch and brainstorming. This is an important event for us, and an important milestone. I want to tell you briefly about the Development Policy Centre: what we focus on, what we have done, and who we are.

From the start, we have had three focus areas. There is a lot of development research going within the Crawford School and the ANU more broadly. We have groups and annual updates relating to China, Indonesia, Vietnam, Burma and other countries. We certainly didn’t want to replicate that. Instead, we picked three areas which matched our interests, and which we felt were somewhat neglected or at risk.

The first is of course aid effectiveness. Aid has been a sleeper in the Australian public debate but also in the Australian research community. This is not surprising when you think how aid volumes stagnated right from the late seventies to the late nineties. But that all changed last decade first with a number of regional interventions – in Timor, the Solomon Islands, PNG, Indonesia – and then with the Howard 2005 announcement that aid would increase from $2 billion in 2005 to $4 billion in 2010. That promise was kept by the Rudd Government, who in addition upped the commitment to achieve 0.5% of GNI in aid by 2015, which equates roughly to $8 billion. And while there is a lot of speculation around this budget, in all likelihood this commitment, which is also a bipartisan one, will be kept, at least in the broad. And I personally think it should be kept.

But, if we are going to increase aid to anything like this extent, it cannot continue to be a policy sleeper. To support an effective aid increase, we need the research, discussion and debate to show where aid is working, where it’s not, and why.

Our second area of focus relates to PNG and the Pacific, and specifically the development challenges facing this region. This again, like aid, is an issue that receives all too little attention in Australia. Yet it is the one area of the world where we can make a difference. And it is a region that matters to us. This is obvious for PNG, which is both bigger than NZ, and much closer to us. But it is also true for other Pacific countries such as the Solomon Islands or Kiribati, vulnerable countries where Australia has no choice but to respond to any crisis. The Pacific and PNG have traditionally been a focus of the ANU, and the economic analysis of the region a strength of the Crawford School. We hope to continue and build on that tradition.

So those are our three areas, and we approach them obviously with a policy focus, but also with a multidisciplinary approach, with strengths in both economics and political science.

What have we done since inception? You can read about this in detail in the Annual Report, so I’ll just summarize briefly here.

We have started a blog, which now publishes every week day, the readership of which continues to grow.

We have organized lots of events, from seminars to lectures to conferences, some 20 last year, and it will probably be the same this year. We didn’t start out planning to do event management, but there has obviously been a big gap in this area. There are a wide range of topics which have been crying out for a higher profile and for public discussion, and groups which wish to promote them, and they are increasingly turning to us to collaborate. In addition, Canberra increasingly attracts a large number of world-class speakers and experts.

And we have collaborated with a wide range of organizations whether for joint events, joint research, or to provide advice or analytical support.

And then, the third area, and the most important: who are we?

When we began a year and a half ago, there were just the two of us: myself as Director and Matt Morris as Deputy Director. Unfortunately, Matt can’t be here today. In fact, he has taken leave from the Centre to work as adviser to Sir Mekere Morauta, Minister for Public Enterprises in PNG. Our loss is PNG’s gain, and I would like to pay tribute to Matt for the crucial contribution he has made to Devpolicy.

Since the start, we’ve been joined by quite a few others. Many of you will know Cleo Fleming, our indispensible Program Manager. This year we hired two Post Docs, Dinuk Jayasuria and Matt Dornan. Matt specializes in the Pacific region, and Dinuk in aid evaluation, so between them they fit the agenda of our Centre perfectly, and will substantially enhance our research output this coming year.

We have a number of graduate researchers. Fortunately for us, Jonathan Pryke turned down several enticing graduate round offers to stay with us after completing his study last year. Kathryn Zealand, Ben Sims, and Paul Wywroll also currently work part-time for us, as did Ashlee Betteridge until recently. We’ve also just been joined by Colin Wiltshire, who has come across from AusAID to do his PhD, and will be working half-time as Project Manager for our new PNG project on budget analysis and expenditure tracking.

One of the many advantages of being within the Crawford School, and I will come to that shortly, is the access it gives to you these very bright postgraduates. We also have a number of PhD students who contribute to the work of the Centre, including Pepe Khennavong, Alicia Molloun, Cate Rogers and Terence Wood.

Another resource we’ve been able to tap in to, which was quite unanticipated when we set up, are senior AusAID staff, who have decided to take a break from the bureaucracy and have joined us as Visiting Fellows. They are a terrific asset. We have Margaret Callan, working on the private sector contribution to development, particularly in PNG, Robin Davies, working on multilateral aid issues, and Andrew McNee, who has just gone back to AusAID after a stint here working on aid, health and PNG.

Finally, but very importantly, we have a network of about 30 Research Associates who are affiliated with the Centre, and who participate in our activities through their research, blog posts, talks and so on. Many of them are interstate or overseas, but some are here tonight: Ian Anderson, Satish Chand, and Tamara Haig, and of course my Crawford colleagues Sharon Bessell, Bjoern Dressel and Ron Duncan.

I should also thank the many people who have helped us get off the ground. There are too many to mention individually so let me just make the general point that if we had tried to set up on our own, as a think tank outside the university, we would have failed. Being part of the ANU, part of the College of Asia and the Pacific, and in particular part of the Crawford School has been a critical part of whatever success we have had to date. The infrastructure the College and in particular Crawford has provided especially in terms of events and websites, the assistance with funding, the encouragement, and most importantly the collegiality have all been of huge importance, and are much valued. I’m particularly grateful to Tom Kompas, the Crawford Director, not just for coming here tonight, but for all the support he has provided us, and for the great team he has put together within Crawford which provide us with so much help.

All in all, if I had to summarize where we have got to, I would say that we have made a start. It has often been said to me that Australia could not support a dedicated development or aid policy centre, such as the Overseas Development Institute in the UK or the Centre for Global Development in the US. I think we have shown that it can. We have established proof of concept.

Of course there is a long way to go, and as many of you will know sustainability is typically the Achilles heel of development interventions. We have four main priorities moving forward.

First, we need to secure our future through funding. So far we have got by largely with generous support from the university and with some contracts we have been able to obtain. We need more and more stable funding sources.

Second, we need to develop our research, by deepening the analysis of topics we have already begun to explore, and taking the research we have already put out to the stage of peer-reviewed publication.

Third, we need to reach out, beyond the development community to the broader community, both here in Australia, and in PNG and the Pacific. We need to communicate more with decision makers, including MPs, and we need to interact more with the mainstream media.

And fourth and last, we need to do everything we can to retain what I think, or at least I hope, is the reputation we have earned as an independent and respected researcher and commentator on aid and development policies in Australia and our region. There has been a gap in the past. Discussion of these issues, everywhere, but especially in Australia has suffered from a real insider-outsider divide, where the outsiders are pretty much in the dark, and the insiders are well informed, but they aren’t talking. That is the gap we have started to fill, by being both independent and informed. My hope is that, not only by our efforts, but by acting as a hub and catalyst for the sector, we can vitalize the aid and development debate in this country.

Stephen Howes is the Director of the Development Policy Centre. Other posts from this launch and brainstorming event to follow.