Unless you’ve been living under a rock, you’re likely aware that the Government commissioned an independent review of the Australian aid program in 2010 to examine its effectiveness and efficiency. The review and government response were released on 6 July 2011.

One year on, one has to ask the question: How is Australia tracking in making aid more effective? ACFID’s First Anniversary Progress Statement aims to provide independent and evidence-based analysis to anyone interested in keeping track of the Government’s progress in implementing key recommendations from the aid review.

So what’s been achieved so far?

One of the key recommendations emerging from the aid review was for the development and implementation of a Cabinet-endorsed four-year strategy for the entire aid program, in order to improve clarity and predictability of policy and funding, and to increase accountability.

In keeping with this recommendation, the Government developed a four-year Comprehensive Aid Policy Framework (CAPF) and released it with the 2012–2013 Federal Budget. The 2012-2013 aid budget measures are the first steps in implementing this plan. The focus on numerical targets in key areas for the measurement of the aid program’s achievements is a politically realistic tool to justify to a busy Cabinet why taxpayers’ dollars are being spent on aid, but the complexity and on-the-ground reality of the development process is ignored by the goals’ simplicity. Targets will need to be augmented by in-depth evaluation to understand whether people are really being helped to overcome poverty. Satisfactory delivery of outputs does not mean human development has occurred, as development workers know first-hand.

The Aid Transparency Charter is also a great initiative and should make it much easier for people in partner countries, researchers, pesky journalists and the Australian public to find out what is happening in the field. Hopefully the short term risks of being transparent, such as the occasional florid tabloid headline, will be offset by greater public awareness and support for the aid program’s achievements at a country level over time.

ACFID also welcomed the new AusAID Civil Society Engagement Framework which means AusAID’s overall approach and interactions with civil society in Australia and in developing countries should be much more coherent, consistent and strategic. Australian political scientist John Keane argues in his magnum opus, The Life and Death of Democracy that since 1945 many societies are transitioning from representative democracy to what he labels ‘monitory democracy’. Keane writes that:

“…in the age of monitory democracy, assembly-based and representative mechanisms are mixed and combined with new ways of publicly monitoring and controlling the exercise of power. Representative forms of government do not simply wither, or disappear…for a variety of reasons related to public pressure and the need to reduce corruption and the abuse of power, representative forms of democracy are coming to be supplemented (and hence complicated) by a variety of democratic procedures that are applied to organisations underneath and beyond states.”

AusAID now recognises the development of civil society as a development outcome in itself to be supported by the aid program, but a challenge will be moving beyond support for CSOs as service providers to a conceptually more sophisticated model where CSOs are agents for accountability and change in their societies. 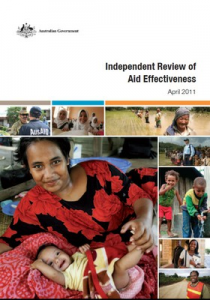 A big challenge for AusAID will be undertaking meaningful evaluations of Official Development Assistance (ODA) across the whole of government. There is a new Whole-of-Government Branch in AusAID, but they have their work cut out for them in dealing with much larger and more powerful segments of the Australian Public Service. The cautionary tale of ADF-led aid in Uruzgan in Afghanistan, intent on winning hearts and minds but leaving white elephant aid projects, has been documented in the media and by ACFID and illustrates the challenge AusAID will have in turning some arms of Government around. The current Government push to use the aid program as a political sweetener as part of a Pacific Solution Mark II is another example which would distort the overall purpose of the revamped aid program.

What are the challenges in implementing the Aid Review?

The main challenge is political. The review panel set out ‘hurdles’ to be met by the aid program and there has been some debate about what the hurdles should be, whether they will be met each year and how this will be demonstrated. In ACFID’s view, the 2011–12 hurdles set by the review panel have been met. Generally, it appears that AusAID’s results set out in the CAPF represent a much more ambitious plan than the hurdles set out by the panel.

Cabinet will see how well this is implemented by the first Annual Review of Aid Effectiveness to be completed in October 2012, but will have a better picture in 2013 as subsequent information is made public. However, the fact that questions continue to be  raised in Parliament about ‘the hurdles’, including in the most recent Budget Estimates session (June 2012) means that there is still some residual uncertainty and a lack of bipartisanship about what the hurdles should be and what the aid program is attempting to achieve. We want the political arguments to focus on the substance of whether we are helping people to overcome poverty.

Further, the Government’s Budget-night decision to delay the scale-up of aid to 0.5% of Gross National Income (GNI) by one year to 2016–2017 caused a major setback to ODA this year and, more significantly, the bipartisan commitment to reach 0.5%. The Coalition has said that the delay places them in an impossible fiscal position, if they were to win power, to implement the 2015 promise in the first budget in 2014 – but has set no target of its own.

The delay and the back-loading of funding could also have a serious impact on the implementation of the aid review’s recommendations if promised budget increases are not forthcoming next year. The Government needs to meet its forward estimate of increasing from the current 0.35% of GNI this year, to 0.37% next.

Overall, ACFID believes the Australian aid program is certainly making steady progress under tight deadlines and intense scrutiny from Parliament and the public. There has been a massive organisational effort by AusAID in terms of changes in policies and processes which is still under way. After only one year, it is too early to see new and firm results in developing countries as a result of the implementation of the review. What achievements that exist are results of the current progress of the aid program but the coming years should reveal more as the new Independent Evaluation Committee – another welcome initiative – starts to oversee the work of the Office of Development Effectiveness and more evaluations are released.

Read ACFID’s full First Anniversary Progress Statement and tell us if you think the Government is getting it right….

Marc Purcell is Executive Director for the Australian Council for International Development, the peak body for not for profit aid agencies in Australia.