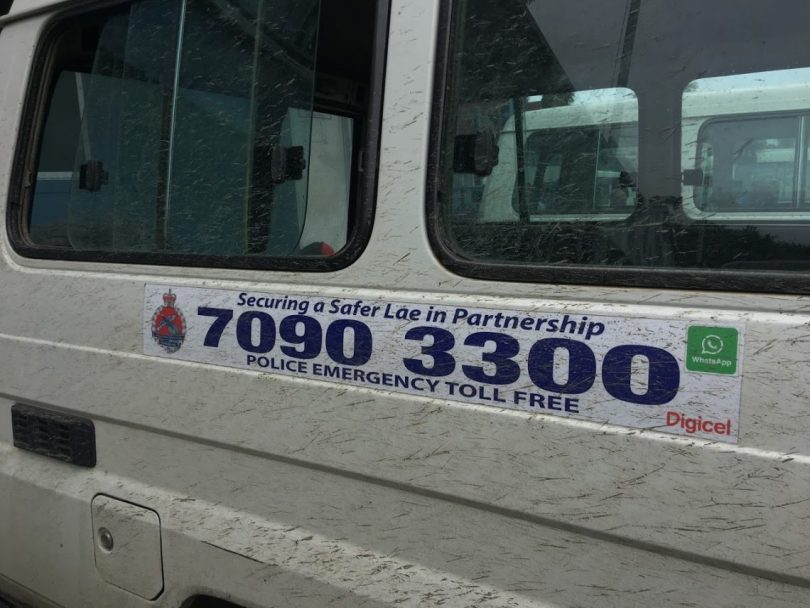 Signage on a police vehicle in Lae (Judy Putt)

PNG has a reputation for high rates of crime, especially in its urban centres. The public sector is under-resourced, with the size of and funding for the Royal Papua New Guinea Constabulary (RPNGC) not keeping abreast of the country’s rapid rise in population. Public surveys and research conducted over the years indicate widespread distrust of the police, their unreliable responses to reported crimes and low arrest rates. A public/private partnership led to the founding of a toll-free emergency police telephone line in PNG’s second largest urban centre, Lae.

A toll-free emergency police telephone line in Lae was developed to address complaints about the lack of police responsiveness received by the then metropolitan superintendent through social media. In partnership with Digicel, a telecommunications company with 92 per cent of the mobile phone market share in PNG, the Lae Metropolitan Command established the telephone line in mid-2016, though the official launch was somewhat later. Open 24 hours a day, seven days a week, the aim of the service was for the public to make free, confidential calls in emergencies, report suspicious or illegal activity and provide intelligence on planned crime or the whereabouts of offenders. The toll-free number was promoted through signs on bus stops and police vehicles, newspaper articles and 500,000 text messages sent by Digicel to their clients.

When a call is received, the time and place of the reported incident are logged at the metropolitan communications centre and, where needed, police at stations or on patrol in public safety vehicles are contacted and asked to respond. Originally set up to cover the city of Lae and its surrounding settlements, the telephone number has now been used in rural areas of  the province and other parts of the country that have Digicel network coverage. However, Lae police do not have the capacity to respond to non-Lae calls, and can only try to contact their counterparts in the relevant locations.

The costs of establishing and operating the service have been borne jointly by Digicel and the RPNGC, with additional assistance from other stakeholders. Key stakeholders refer to the following as having contributed to the successful establishment of the toll-free line:

During the initial phase of the line in 2016–17, it was estimated that 60 per cent of calls were from the public, 25 per cent were from police officers and the remainder (15 per cent) were missed, false information or abusive calls.

In 2018, there were a total of 3119 calls about crime incidents, plus 105 missed calls, 401 abusive calls and 10 false calls, as well as a small number of text messages. As of August 2019, use of the line has increased to an estimated 1500 calls per month, with the afternoon shift receiving the most calls and text messages (53 per cent) compared to the night (19 per cent) and morning shifts (28 per cent). With demand on the rise, an increasing proportion of calls are not answered. During the first three months of 2019, one-fifth (20 per cent) of 1534 calls were recorded as missed, with a small proportion recorded as abusive (4 per cent).

Based on 2018 statistics, a broad range of incidents are reported in calls to the telephone line, including suicides and traffic accidents. As Figure 1 shows, many incidents relate to violent crime and disorderly behaviour. Major violent crimes are also reported, albeit less frequently, with 43 murders/attempted murders and 46 serious sexual assaults/rapes reported during the year. 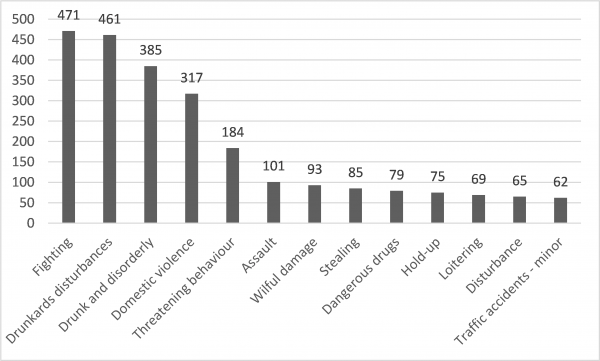 According to Lae police and other key stakeholders, the combination of the toll-free line and a more responsive police service has had a significant impact. Armed robbery, for example, reputedly declined within two months of the line’s introduction from 20 to less than 0.5 incidents a month. Police say community safety has improved and there is a greater public trust in the Lae police. Future research such as a crime and safety survey of the general public will help confirm whether this is in fact the case and whether the positive changes are sustained over time.

The available evidence suggests that the emergency police toll-free line in Lae has been well used and has had a positive effect, including on crime prevention and detection, as well as perceptions of public safety. Several factors were critical in its success to date, such as the public/private partnership established by key leaders, the support and funding from external and local sources and the expansion of police capacity to respond to calls with additional vehicles and shifts. To keep up with demand, a larger operations centre is being built with four incoming lines. Lae police hope to conduct more awareness to reduce abusive and nuisance calls. A fundamental question is whether such a toll-free emergency police line can operate effectively and result in positive changes in other urban centres in PNG and the Pacific region.

This blog was first published as DPA In Brief 2020/9, and is the second in a two-part series. Part one is available here.

This blog is the work of the authors and does not necessarily reflect the views of the organisations mentioned.