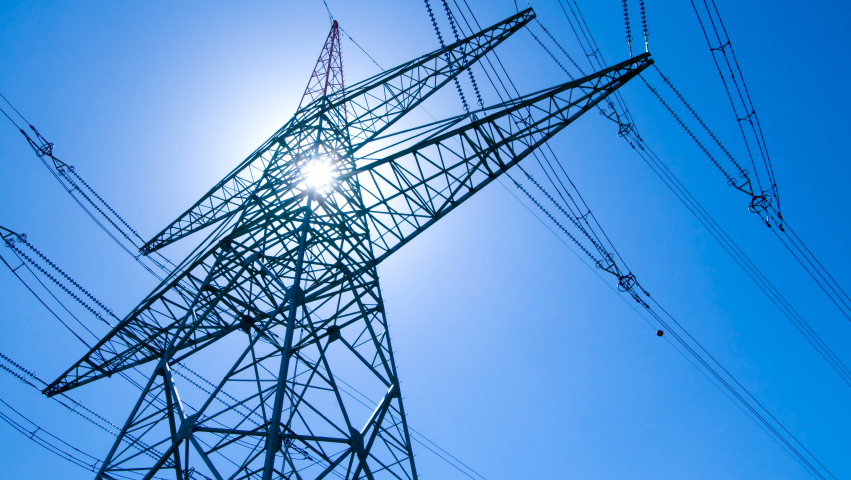 Energy poverty and access to electricity in the Pacific: heading in the wrong direction?

Energy poverty is widespread in Pacific island countries, including PNG. It is estimated that 70 percent of households in the region do not have access to electricity and 85 percent do not have access to clean cooking energy technology. This is low by international and regional standards, being equivalent to access rates in sub-Saharan Africa, and slightly below the average for low income countries (despite higher income levels in much of the Pacific).

Energy poverty, or the lack of access to modern energy services, is a concern given its development impacts. Limited access to electricity is a barrier to economic activity and the delivery of key public services, including health, education and infrastructure services. At the household level, un-electrified households have been shown to spend more on energy than do households with access to electricity. This commonly takes the form of fuels for lighting, such as kerosene.

In a paper that was recently published in Renewable and Sustainable Energy Reviews (available here [pdf]), I examine reasons for the low rate of access to electricity in the Pacific, and assess whether we are heading in the right direction – i.e., is access to electricity in the region improving? The short answer, based on the available evidence, is ‘no’. There has been very limited progress in widening access to electricity in rural areas – which is where the vast majority of Pacific households without access to modern energy services reside. This is particularly true in Papua New Guinea (PNG), Solomon Islands and Vanuatu, where electrification rates are lowest, being below what would be expected given per capita income levels (see Figure 1). These countries also feature high levels of population growth. 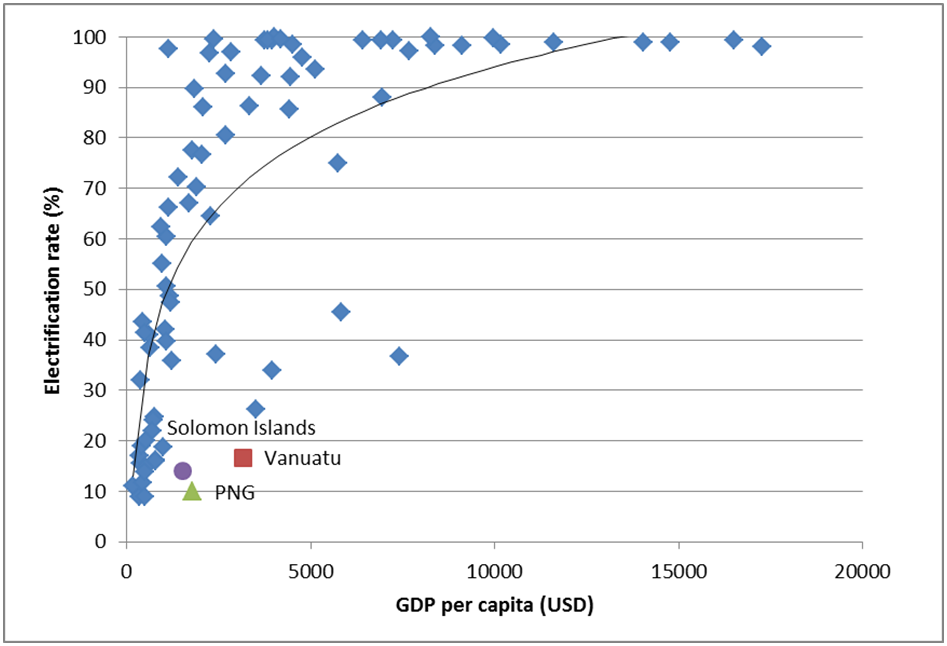 There are a number of reasons – elaborated in the paper – for why access to electricity in rural areas is so low in the region.

There are already indications that this is occurring. At the Pacific Energy Summit in March 2013 (a critical review of which was provided on this blog), governments of Pacific island countries provided a list of current and proposed projects in the energy sector. The list is not a comprehensive overview of spending in the energy sector, but it does indicate projects for which Pacific island countries seek funding, and therefore provides insight into the priorities of governments. Projects that focus on expanding access to modern energy services (including electricity) accounted for 4 percent of the total value of projects on the list. The vast majority of projects involve power generation for urban electricity networks (known as “grids”) using renewable technologies.

The reasons for limited progress in widening access to electricity are broader, of course. One important factor is the way in which existing subsidies – both explicit and hidden – are spent. The bulk of subsidies are currently directed toward maintaining low residential electricity prices – primarily for urban electricity grids. In other words, subsidies are directed toward maintaining low prices for households that already have access to electricity, not for broadening access to electricity. These subsidies can take the form of periodic injections of capital to power utilities that are in financial distress, tax breaks, loan guarantees or explicit budget allocations. These universal subsidies disproportionately benefit high income households, and do not accrue at all to un-electrified households (a more effective arrangement involves lifeline tariffs/prices for low levels of use, which better target low income households – this is explained in the paper).

Indeed, incentive problems are not only the result of cross-subsidisation. A recent benchmarking survey of Pacific power utilities suggests that there are six utilities that make a loss on every unit of power that they sell. For these utilities, there is no commercial incentive to expand access to electricity – to do so would only result in further financial losses.

Regulatory reform is required to address such issues. Indeed, a key argument of the papers is that Pacific island governments, to expand access to electricity, must reform institutional arrangements in the power sector.

The points raised so far highlight the barriers to the extension of urban and peri-urban electricity grids into rural areas. But what about rural electrification in areas where the electricity grid will never extend? The geography and population distribution of countries like PNG, Solomon Islands, Vanuatu, FSM and Kiribati makes the installation of off-grid systems crucial. Yet subsidies directed toward electricity consumption in urban areas far outstrip government funding for installation of off-grid systems, such as village-based diesel generators or solar home systems.

These priorities should be reversed. In the paper, I argue for increased funding to be directed towards rural electrification using off-grid systems, and for these resources to be made available by reducing universal subsidies for power consumption among households connected to the electricity grid/network. To widen access to electricity in remote areas, however, institutional arrangements that facilitate the maintenance of off-grid systems must be established. This is likely to be a challenge. Past donor and government-funded off-grid rural electrification projects have often had limited impact due to the failure of off-grid systems. I canvas a number of approaches that could be used to ensure adequate maintenance – notable among them being a concession model where a private company or large-scale community cooperative is responsible for the operation and maintenance of off-grid systems. The approach is certainly not a panacea, but its effective use in parts of Africa and Latin America suggests that it warrants consideration.

This blog post summarises a journal article published in Renewable and Sustainable Energy Reviews. A copy of the paper can be accessed here [pdf].