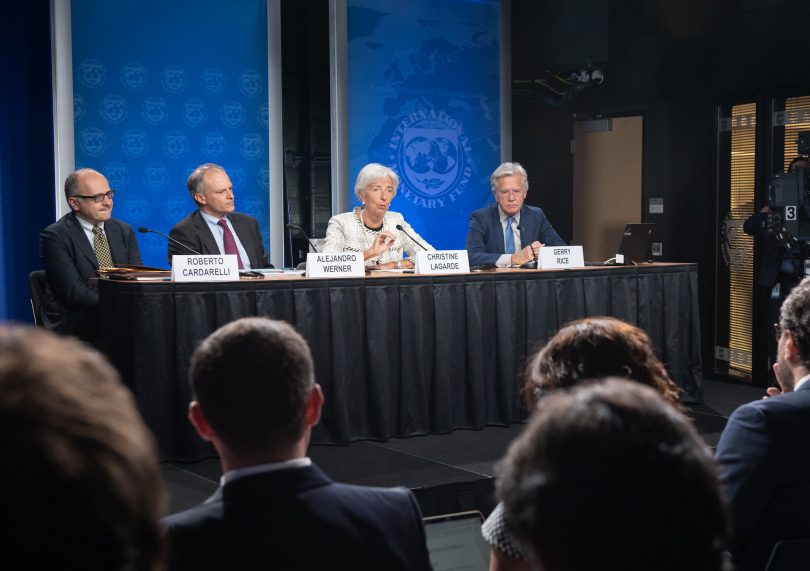 IMF staff deliver remarks to media regarding IMF's loan for Argentina in the form of a stand-by arrangement, 20 June 2018 (IMF/Flickr/CC BY-NC-ND 2.0)

Argentina has announced that it is seeking financial support from China to help manage its currency crisis. It is engaging in a process that has become known as ‘facility shopping’. Countries facing an economic crisis now have plenty of options for where they can get financial assistance. The goal of facility shopping is to obtain the largest amount of financial assistance possible without having to undertake difficult economic reforms in return.

While facility shopping might be appealing for the country facing a crisis, it is a worrying trend for the global economy and could have profound implications for the international geopolitical landscape.

If a country suffered a crisis back in 1980, there was only one person the finance minister needed to call: the managing director of the IMF. The IMF would assess the financial shortfall, analyse the root causes of the crisis and offer financial support, provided the country’s finance minister was willing to undertake the economic reforms prescribed by the IMF.

Today it is a different story. Embattled finance ministers have many more options. The IMF often plays a smaller role. Ministers could go to a regional financing mechanism, such as the European Stability Mechanism or the Chiang Mai Initiative Multilateralization. They could go to a development bank, such as the Asian Development Bank. They could seek a bilateral currency swap line from the central bank of another country. Or they could go to the finance ministry of another country for a bilateral loan.

The loan Argentina is seeking from the People’s Bank of China is the latest example of facility shopping. Mongolia sought similar assistance from China over the last several years to deal with its own crisis. Indonesia sought a credit line with the Asian Development Bank during the Taper Tantrum in 2013, rather than seeking one from the IMF. In 2015, Greece tried to get a better deal out of the European Union and the IMF by threatening to go to Russia for help.

Facility shopping can be a problem for the global economy. It can mean debts are simply transferred from one country to another, instead of having credit risk diversified across the IMF’s global membership. It can mean the responses to crises are less predictable and less consistent. It can mean a slower response to crises, resulting in a higher overall cost. It can raise challenges in coordinating multiple institutions and mechanisms during a crisis. It can mean that important reforms that address the root causes of crises are not implemented.

Facility shopping can have important geopolitical implications too. In 2014, then-US treasury secretary Jacob Lew implored the US Congress to approve additional IMF funding to provide assistance to Ukraine. Rather than arguing it as an economic issue, Lew described helping Ukraine as being a matter of national security, citing the geopolitical threat posed by Russia to an economically weak Ukraine. When Greece approached Russia for financial assistance, it caused a similar level of concern among US policymakers who feared what Russia might ask for in return.

It seems unlikely that Chinese officials are unaware of the geopolitical benefits of providing financial assistance to countries in crisis. China’s currency swap lines with Argentina and Mongolia are not necessarily prudent investments, at least not economically. At its core, the arrangement involves China exchanging its relatively valuable currency for currencies that are rapidly declining in value. This credit risk is the reason most central banks, including those in the United States and Australia, do not allow their currency swap lines to be used during crises.

China’s generosity may, of course, have nothing to do with geopolitics. It may be motivated by its desire to internationalise the renminbi, to help the economic recovery of important trading partners, or both. These arguments are entirely reasonable. But regardless of China’s motivation, its actions may nevertheless have geopolitical implications, as well as implications for global governance. Indeed, minimising the role of geopolitics in crisis response is one of the key benefits of having the IMF in the first place.

What can be done to reduce the incidence of facility shopping?

The ability and desire of countries to engage in facility shopping is driven by several factors, each of which needs to be addressed.

One reason for facility shopping is the IMF’s reputation. Argentina and Indonesia have painful memories of the IMF’s policy prescriptions in the past, which were widely perceived to have unnecessarily prolonged previous crises. Another reason is the stigma of going to the IMF. Seeking IMF assistance can sometimes prompt a negative market reaction. Financial support from the IMF also tends to come with more conditionality and less flexibility than is the case for bilateral currency swap lines.

Another reason is that the IMF’s funds are insufficient for some crises, making facility shopping a necessity. The slow pace of IMF reform, which results in the emerging economies being grossly under-represented in the IMF’s governance, also acts to encourage these countries to preference institutions in which they are better represented.

IMF governance reform, increased permanent IMF funding and more flexible IMF lending arrangements will be critical to reducing the incidence of facility shopping in the future. Ensuring better coordination between the IMF and regional institutions is also key. Unfortunately, the global economy may be heading in the opposite direction.

By 2022, the IMF’s resource base will fall by 50 per cent. The United States must approve additional funding and further IMF reform to avoid this. The failure of the United States to do so will substantially exacerbate the incidence of facility shopping and undoubtedly threaten its geopolitical interests. But whether the Trump administration and US Congress will act before it is too late remains an open question.

This post is republished with permission from East Asia Forum.