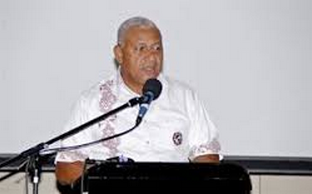 Fiji’s 2015 budget ‘Turning Promises Into Deeds’ is the first budget of a democratically elected Bainimarama government. It is an important budget, as it gives us some indication for where the government’s priorities will lie for the rest of its term.

Detailed analysis has been limited. SODELPA, the main opposition party, has described the budget as “creative” while raising concerns that government may not “be able to find proper funding for all the activities”. The Fiji Labour Party has also questioned the budget’s affordability. Opposition finance spokesperson and leader of the National Federation Party (as well as former USP economist), Biman Prasad, has argued that the budget is “boring”, stating that: “I was looking for much more imagination and vision in this budget – an economic vision, but I don’t find that in this budget.” Budget summaries have been provided by PWC [pdf], Ernst and Young [pdf], and KPMG [pdf], as is standard.

My assessment is that the 2015 budget, above all, is characterised by its continuity with the past. Boring or not, this means a continuation of (for the most part) sensible economic policies, coupled with an apparent unwillingness to rein in spending.

The Bainimarama government continues to direct significant funding to development expenditure (see figure 1), and to road infrastructure in particular (as discussed below). Money has been set aside to subsidise the electricity and water consumption of poor households connected to the grid/network, which is a welcome initiative and follows on from similar provisions in previous budgets. The 2015 budget also increases compulsory superannuation payments, from 10 to 12 percent of income: a sensible measure, given the poor performance of the Fiji National Provident Fund (which has effectively been required to lend to government at low rates) and early retirement of civil servants.

Less positive is the mish mash of tax incentives for investment which, disappointingly, the government has chosen to extend rather than rationalise. 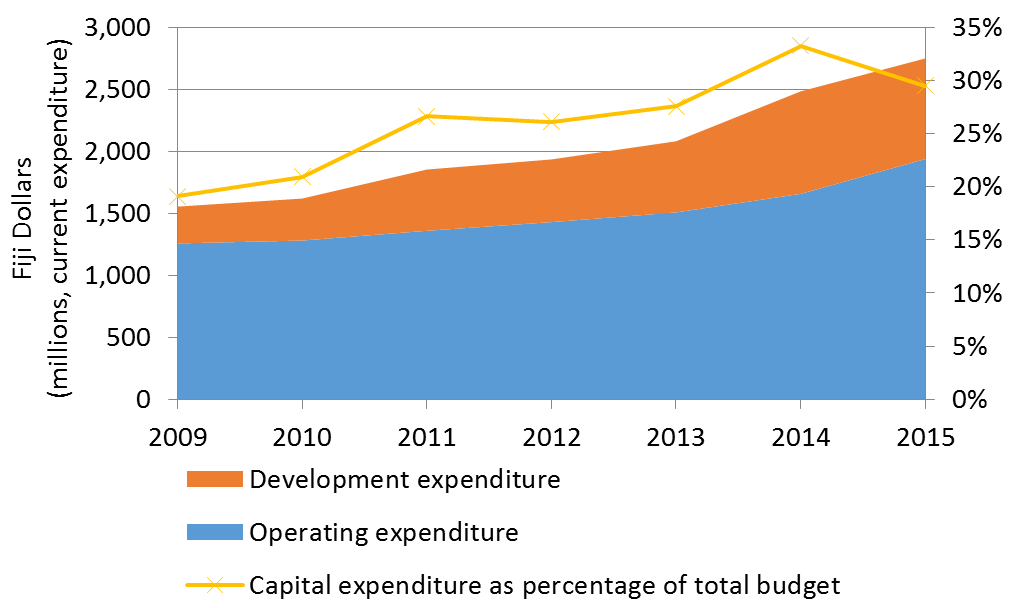 The overall fiscal picture is concerning. My analysis of the budget last year raised questions about the sustainability of government spending – a point also raised by USP economists Neelesh Gounder and Biman Prasad. More specifically, I argued that the 2014 budget:

These statements also apply to the 2015 budget.

Generally, the budget following an election is the most frugal. Governments that have just been elected do not need to ‘win over’ voters, so take the opportunity to implement politically difficult decisions such as cutting government spending and/or employment (as seen in Australia this year).

But Fiji’s 2015 budget goes against this pattern. Instead, the Bainimarama government has delivered another record-sized budget, and another budget deficit (of 2.5 percent, up from 2 percent this year). I will argue below that this creates challenges for the government in the future.

As in 2014, the 2015 budget deficit is masked by receipts from one-off asset sales. The $507 million of asset sales included in the 2015 budget are, by and large, the same sales that were flagged in the 2014 budget, and involve divestments in Airports Fiji Limited, Fiji Ports Corporation and the Fiji Electricity Authority. These sales did not proceed in 2014, so whether they proceed in 2015 is not assured. The impact of these one-off sales on the headline budget figures is enormous. Figure 2 shows that the projected deficit of 2.5 percent of GDP blows out to 8.3 percent of GDP if asset sales are excluded. 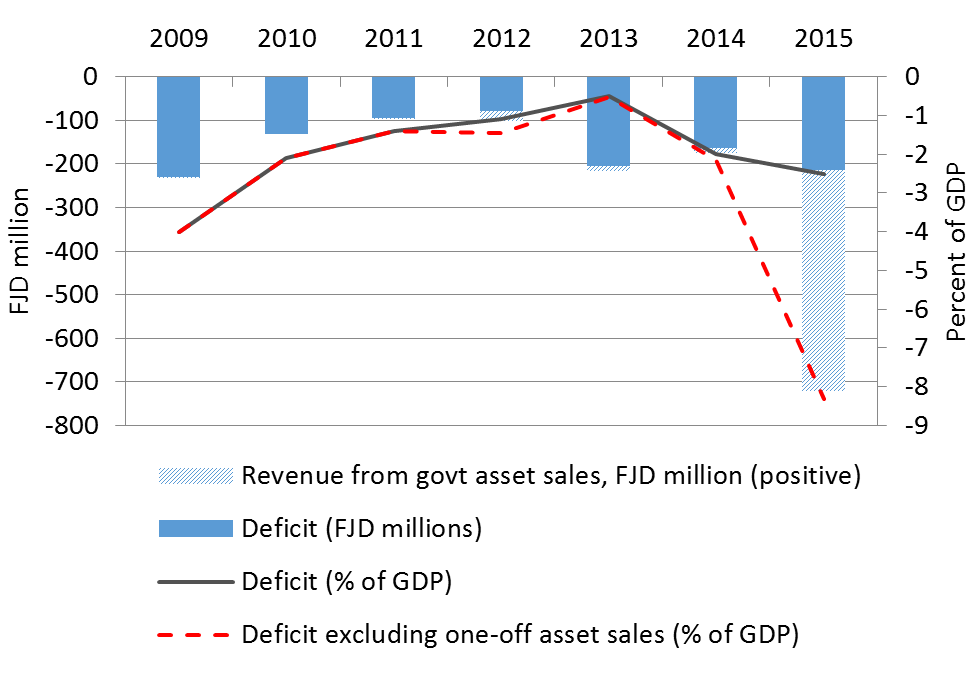 There is a strong argument for excluding asset sales from analysis of the budget, given that they involve a ‘one-off’ revenue windfall. Recent history in Fiji would suggest that another reason for looking at the underlying deficit – which excludes one-off asset sales – is that there is a good probability that the sales will not actually proceed.

The failure to rein in spending in 2015 will mean that the Fiji government must cut costs in subsequent years in order to manage debt levels. Government debt is currently almost 50 percent (see figure 3). This is forecast to decline to 46.7 percent in 2017 in the budget paper. However, for this to occur, real expenditure will need to decline in 2016 by about 7 percent, and there will need to be no increase in real expenditure in 2017. And these figures assume a strong economy, along with its commensurate boost to government revenue. Real economic growth in 2015 is forecast by the Fiji government to be 4 percent. The IMF forecasts real growth of 2.5 percent.

Low-cost finance from development partners will be of assistance in managing debt. ‘Re-engagement’ by ‘traditional’ development partners will enable the government to pay-back expensive debt using cheap loans (expensive debt that includes the US$250 million global bond on which the Fiji government pays interest of 9 percent). But this does not change the fact that meeting the government’s medium term fiscal targets (including debt targets) will be arduous. 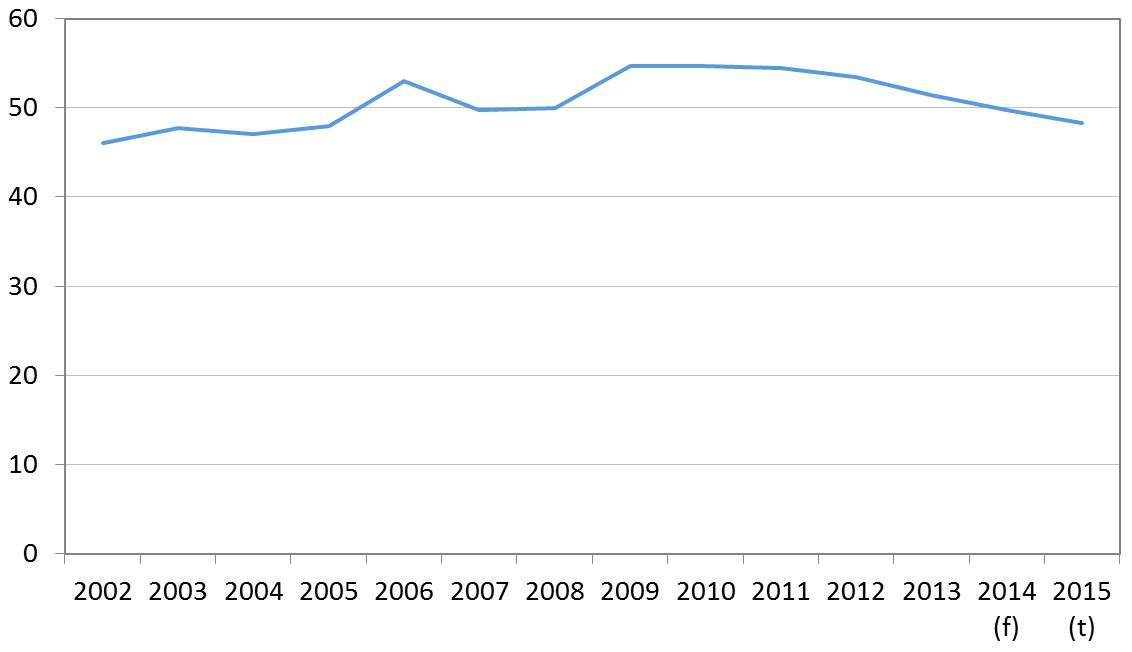 An interesting question following on from last year’s budget is why the projected deficit of 1.9 percent of GDP was almost met, despite the government proceeding with only $12.8 million worth of the $475.2 million asset sales it had envisaged. One reason is that tax revenues were higher than expected: direct (income and company) taxes were $98 million above budgeted levels, and customs duties were $23 million above budgeted levels. Strong revenue performance reflects higher investment and economic growth rates than had been expected. The second reason is that there were significant underspends, with overall government expenditure 11.2 percent below budgeted levels in 2014.

In summary, the 2015 budget appears to be ‘business as usual’ for the Bainimarama government. Spending priorities in the budget are appropriate, although it will be interesting to see whether development spending allocations are credible. But the underlying fiscal position of the government is a concern. The Bainimarama government appears unwilling to rein in spending, with an underlying deficit of 8.3 percent of GDP for 2015 concealed by one-off asset sales. This is a large deficit, and represents an increase on the 2014 deficit at a time when economic stimulus is not required (the Fiji economy is forecast to grow 4 percent in 2015). The corresponding delay in fiscal consolidation will cause more pain in future years, and will require decreases in real expenditure if the government is to meet medium term fiscal targets. Perhaps the silver lining, post elections, is that ‘traditional’ development partners will be on hand to offer low interest finance.