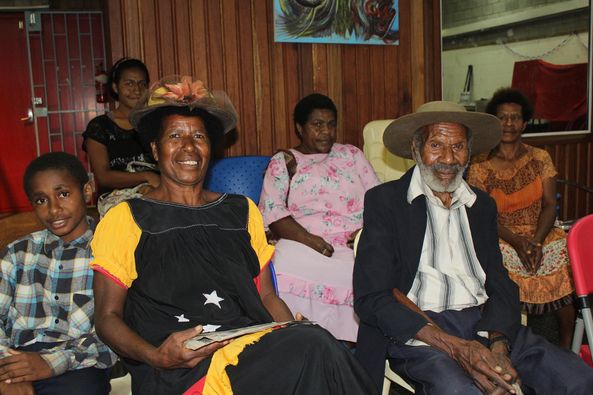 The PNG National Museum and Art Gallery’s Oral History Project and Military Heritage Project are essentially a national search for common identity, and dare I say, a national consciousness, in a country where divisive diversity is the norm. The former does so through a blending of different stories, while the latter seeks to do so through the preservation of the materiality of WWII.

Ironically, the most destructive manmade events often leave in their wake a regenerative compulsion among the humans affected by them. The trope of the ‘fuzzy wuzzy angels’ or the Green Shadows, for instance, are the stories of individual sacrifices writ large. Yet the meta-narratives they feed into often fail to recognise the individuality of suffering and sacrifice. The Oral History Project seeks to identify, individuate, honour and recognise while amplifying Papua New Guinean involvement to a national and international scale.

Gallipoli held sway over the Australian national psyche for the early part of the twentieth century, just as the Revolutionary War and Civil War had for America, or Vimy Ridge and Passchendaele had in post-WWI Canada. Retrospectively, many Australians now view Kokoda as the true test of Australian mettle in a war that was seen to be quite literally at their doorstep. An important question for the Project though, has and continues to be, ‘what were Papuans and New Guineans fighting for?’ The answers gleaned are more nuanced than suggestions of conformity.

The Oral History Project is a grand effort in developing a national consciousness, especially in a country that has struggled with a weak sense of nationhood and where tribal affinities are often prioritised. Wartime service can be constructed as an occasion on which people from across the land worked together on a common project.

The majority of the wartime carriers did not come from the region of the Kokoda Track – Koiari, Biage and Kaiva. These local people were directly displaced by the fighting. Most of the carriers were recruited from existing labour pools in Port Moresby and further along the Papuan coast, from Daru to Milne Bay and Gulf. New Guineans who were conscripted and shipped to Buna carried for the Japanese, and many of those who survived then escaped and joined the Australians. Men from Bougainville, the Sepik and Rabaul also walked the Kokoda Track.

Many of PNG’s WWII veterans have passed away, and their numbers continue to dwindle, so the Oral History Project is literally a race against time to capture their voices in the first person – though this point is not always appreciated or taken seriously enough by the PNG Government.

The fact that we have now lost another one of these old men, in the Late Nepe Kumanyal who passed away on 20 September 2020 in Port Moresby, is sad. But we are thankful that he shared his story with the Museum in 2015. His story is unique, for he is the only person from the Highlands region whose war service story has been recorded by the Museum.

That most of the carriers who worked along the Kokoda Track came from other parts of Papua and New Guinea and were recruited from existing labour pools explains how Kumanyal was pressed into service. He was from Simbu in PNG’s Central Highlands. I interviewed him on 14 August 2015 at the Museum Theatrette. Kumanyal told me how he started carrying cargo for a kiap (colonial official) he knew only as ‘Master Kyle’ sometime in the 1930s, shortly after Australian gold prospectors and kiaps had intruded into his region. Kumanyal said Master Kyle paid the carriers in shell money, which was more valuable to them at the time.

Kumanyal said he was a young man in 1942 and was in Wau, Morobe Province, with other Simbu carriers when war broke out. ANGAU (the Australian New Guinea Administrative Unit) recruited Master Kyle as a Coastwatcher and intelligence officer, and he simply used the same Simbu carriers he had employed to trek to Wau with him from the Highlands. From Wau, they walked to Salamaua and then further south to Oro where they met up with Australian forces at Kokoda Station. Kumanyal described how he saw and met other Papua New Guineans at Kokoda Station, but they could not communicate with each other because they all spoke different languages. He said they would signal with their hands over their bellies to indicate to the white men that they were hungry. Kumanyal served as a carrier and later went to Port Moresby where he received training to be a medical orderly.

In the high diction of war, normal language and terms are often ‘raised’ to give them commemorative and emotional force in the aftermath. For instance, friendship becomes comradeship or mateship; bravery becomes valour or courage; determination becomes endurance or ‘Kokoda spirit’; soldiers become warriors. And carriers, whose range of tasks included menial labour, have been described as angelic beings whose intercession and assistance, especially on the Kokoda Track, has been immortalised in poems, prose, photographs, paintings and other popular merchandise.

The ‘carrier’ has been reformulated in locution as almost worthy of divinity. Yet this still disavows the individuality of their suffering and sacrifice. What is perhaps most fuzzy about the ‘fuzzy wuzzy angels’ is the official recognition, and to state it bluntly, the monetary compensation or lack thereof, given by the colonial administration and now the PNG Government.

In 2009 the Australian Government offered symbolic compensation through a new Fuzzy Wuzzy Angels Commemorative Medallion, which it bestowed on surviving carriers and their descendants. Late Kumanyal showed me his medallion when I interviewed him in 2015, but lamented the fact that since the end of the war he had never been paid anything. Apart from his medallion, Kumanyal and his daughter Nancy, with whom he was living, always looked forward to the annual Remembrance Day celebrations and its free meals. ‘Tis all cruel tokenism though, to be honest. In another irony, this year’s Remembrance Day celebration, which would have been Kumanyal’s last, was cancelled because of the COVID-19 pandemic. 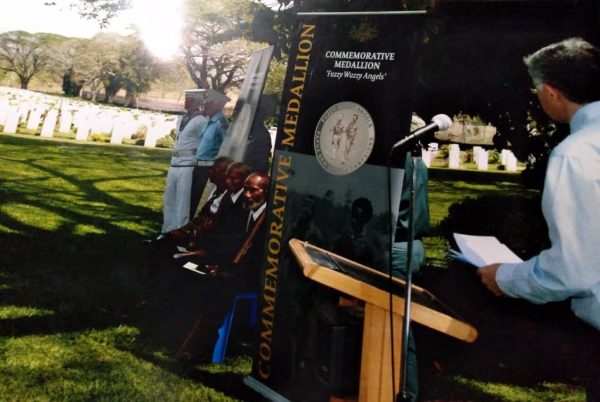 Kumanyal’s extraordinary story is made all the more amazing by the fact that he lived in a region that had at the time only recently been intruded by the Western world. He was likely the first generation from his place to see white men and experience that quantum leap in technology, which was then accelerated tenfold by the war.

A common vignette from the oral histories of the war is that Papua New Guineans were like ‘meat in a sandwich’. This is an expression of a situational irony whereby PNG participants found themselves in an unexpected position through no direct action of their own. Some saw no racial differences between the Australians, Americans and the Japanese, as was initially the case for Kumanyal. As a Papua New Guinean observing the war and studying its effects in the present, I note the irony in Papuans and New Guineans helping one colonial master to fight another foreign power who might have become the next colonial master. And yet the outcome of the war, as it turned out, was so important to the disintegration of the colonial complex and PNG’s future path to self-determination.

Late Nepe Kumanyal is survived by five children, 19 grandchildren, 29 great-grandchildren and 1 great-great-grandchild. His funeral service was held on Monday 19 October 2020. He will be laid to rest at his home village, Konoma, Sinasina-Yonggomugl, Simbu Province. For more information or to make contributions please contact Nancy Kumanyal on (675) 7140 4055.