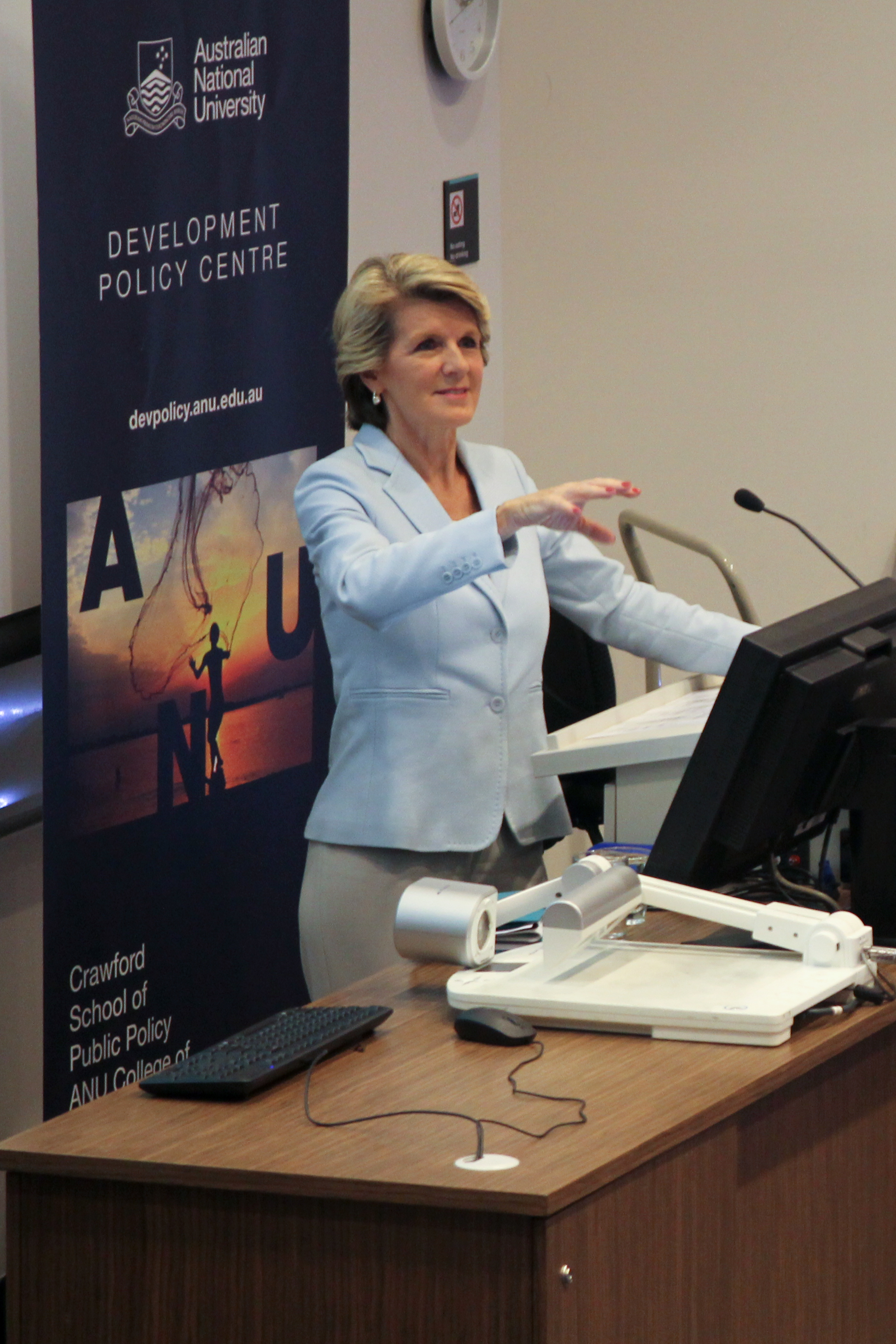 Two weeks ago Foreign Minister Julie Bishop gave the opening address of the Australasian Aid and International Development Policy Workshop to a full house at the Crawford School’s biggest lecture theatre. The full text of the address is available here and a podcast recording here.

The first good thing about the lecture was simply that it happened. Normally Foreign Ministers only turn up to talk about aid at the ACFID annual dinner, and even then they don’t do it every year. Our stakeholder survey showed that one of the key deficiencies of our aid program as perceived by stakeholders was a lack of political leadership. Ms Bishop talked about aid in October at ACFID, and then again to us earlier this month. That is the sort of leadership the aid program needs. I particularly enjoyed her defence of the decision not to fund the rebuilding of the Granada Parliament.

Second, the speech was reassuring on all three of the ‘aid for trade’, ‘economic diplomacy’ and ‘national interest’ fronts. Many have worried that the Coalition’s and Minister’s emphasis on these terms would mean quite a different aid program, one more about us and less about the poor. There was no sign of that in the speech. Aid for trade would mean: “using more of our aid to create jobs, to build schools and investing in productivity enhancing infrastructure and spending in our region.” Economic diplomacy is to involve us working “with partner governments to build the critical institutions and the policies they need to facilitate trade and promote functioning economies.” And it is in our national interest “for there to be peace and prosperity in our region.”

Ms Bishop did mention that there would be opportunities for Australian companies to be involved, but this seems harmless enough. Opportunities are not reservations.

Increasingly, all the talk of economic diplomacy and the national interest seems to be a way to rebrand the aid program, to sell it to a sceptical Australian audience. I always think that the humanitarian dimension of aid is the key: we give aid to help people whose level of poverty is inconceivable to us. But if the Foreign Minister can firm up support for aid using a different language then all strength to her. The ABC Vote Compass poll conducted in the run up to the election certainly showed a society divided on aid, with as many wanting less aid as wanting more.

Relatedly, it was also interesting and rather reassuring that many of the aid initiatives signalled out for praise were ones introduced by the last government. More evidence of a more bipartisan approach to aid.

Third, the speech was sensible on the role of economic growth. Yes, there was a strong focus in it, and there will be in the aid program, on economic growth. But it is not a monomaniacal pursuit. To the contrary, “Prioritising economic growth doesn’t mean a lesser focus on human development or poverty reduction – they are two sides of the same coin.” And women’s empowerment was singled out for special attention.

The only jarring note on growth was the statement that the rapid decline in poverty in Asia was “not because of the aid budgets, it is because economies have been opened up to trade and investment.” This is a statement that demands qualification. I presented a paper with Stephen Smith at the aid workshop (available soon) demonstrating the critical role aid played in both Korea and Taiwan back in the 1950s and 1960s.

Fourth, the speech signalled a change of views on delivery partners. Before the election, it seemed that NGOs would be the preferred delivery partners, at least according to Joe Hockey. After the election, in the ACFID speech, the message was anyone but multilaterals. But this speech seemed to be even more even-handed, with the Minister saying at one point: “I’m agnostic about how aid is delivered. I want to see the best forms of delivery by the best organizations equipped to do it.” In fact, the speech was notably positive on multilaterals, with statements such as “I am really impressed with the change in thinking of a number of multilateral organisations” and a promise not to “take money away from multilateral organisations that have a much broader sweep.”

Fifth, the Foreign Minister highlighted the importance of aid effectiveness, calling it her “watch word”. For a think tank focused on aid effectiveness, that’s music to the ear. The Minister emphasised the need for accountability and reliability, while saying the government would not impose “unreasonable standards” on partner governments or NGOs. She emphasized the importance of evidence-based decision-making: “You don’t keep putting money into a program that’s failing….And where it is working, replicate that, scale that up.” In the Q&A session, the Minister undertook to join the US-UK Development Global Innovation Venture or, less convincingly, set up an Australian equivalent. This is (or would be) a fund for piloting good ideas and subjecting them to rigorous evaluation.

So what was there not to like about the speech? The biggest change promised for the aid program seems now to be not a change in objective or even a shift in sectors or delivery partners but rather a shift away from direct service delivery. As the Minister has now said more than once: “Australia should not still be providing textbooks to classrooms, we should not still be providing basic drugs for health centres.”  That requires a separate blog, but the justification that service delivery is the responsibility of sovereign governments won’t wash. What isn’t such a responsibility? Why is it not ok to buy drugs for PNG health clinics but ok to build them a hospital?

But what I want to focus on here is the new detail provided on benchmarking. The Foreign Minister gave significant shape in her speech to the proposed benchmarking of Australian aid. There will, she said, be three levels of benchmarks. The top tier will be “a small number of high level targets” to “assess the entire aid program against key goals and priorities.” The second tier will be “at the level of individual programs,” and the third will be at the individual project level. Assessments at the second tier will be used to allocate funds between countries. Assessments at the third tier will be used to shift funding towards better performing projects.

All three tiers will be different under Coalition. I have no objection to the first tier being changed. We all know which countries are on- or off-track against the MDGs. It might well be more useful to have as our first tier a small number of key government commitments, such as whether we are indeed focusing on the Asia-Pacific, or doing more with the private sector.

In our critique of last year’s aid assessment produced by AusAID, we criticized the absence of attention to the performance of country programs and to that of projects. Both are assiduously documented by various aid program performance management systems, but were thoroughly neglected in the annual assessment. So I also welcome giving more attention to country and project performance, and using this information to direct more money to better programs and projects.

The worry is that the three new tiers seem to have squeezed out the old third tier, which is the most important. It is extremely difficult to measure aid results, and there is little variation from year to year(as this recent ODE report shows – see Figures 1 and 4). It is much easier to measure organizational and operational performance. And we know that good organizations will deliver good aid.

The sorts of things that should be measured in the third tier are: how often staff change positions; how transparent the aid program is; what the average aid project size is; how timely decision making is; how well the various systems needed to produce effective aid are working. Yes, it’s process, process, process. But don’t screw your nose up at it. Sometimes process is the best and most important thing to measure. The aid program got better at reporting on process with its old three-tier framework. For the first time, the aid program started reporting, for example, how long staff were in position. It would be sad if that start was reversed. As we argue here [pdf], process should get more not less profile in any new approach to aid effectiveness and results reporting.

So, that’s my worry, and we’ll be watching the next steps in the benchmark space with interest. But overall there was a lot to like in the Bishop speech, not least reassuring clarity, which, after some very difficult months, is just what the aid program needs.