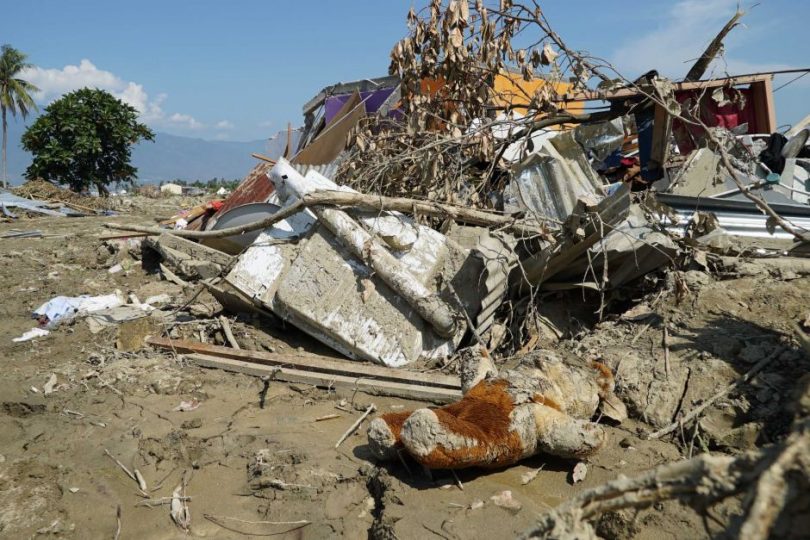 A mud-covered teddy bear lies among a pile of debris following the recent tsunami in Indonesia (Credit: ABC News/Ari Wuryantama)

ODI’s Soumya Chattopadhyay looks at new data on global poverty. Poverty is still falling, but not as fast as previously.

Jasper Cooper has a fascinating looking discussion paper based on a recent impact evaluation of a community policing project in Bougainville. A central finding: “As police enforce a more equal rule of law, and empower women, men seek to preserve their advantage by increasing their reliance on local chiefs.”

Why did al-Qaeda succeed in some countries and fail in others? Why did it adopt different approaches in different parts of Middle-East? In this podcast on the Lawfare blog, academics Aaron Y. Zelin and Barak Mendelsohn discuss recent research on the terrorist group’s strategies and the barriers it has faced.

Commentary on The Conversation asks whether a better tsunami warning system could have saved lives in Indonesia.

Have you heard about the Albanian miracle? Ricardo Hausmann argues on Project Syndicate that it’s unfolding right before our eyes thanks to a savvy grab bag approach to economic reform. (It’s worth reading the comments under the article for some skepticism too, though.)

Also on Project Syndicate, the UNDP’s regional gender adviser for Eastern Europe and Central Asia on how making women part of the planning process can guard against reproducing gender bias in disaster mitigation and recovery.