Using the ENP, PNG’s parliament fragmentation after the 2017 elections was high: 6.9 if calculated with independents excluded, or 9.1 with independents included and treated as separate ‘parties’. This puts PNG among a very small group of countries globally with highly fragmented parliaments: Belgium (9.7), Bosnia and Herzegovina (8.7), Brazil (16.5), Indonesia (7.5) and the Netherlands (8.1). However, PNG’s ENP hasn’t stayed static throughout the political cycle of this parliament.

The number of parties in parliament began at 21 in 2017 and has grown since. The ENP, however, has fluctuated and is now actually lower than it was in 2017. (My calculations here and in the rest of this post are made including independents as if they were individual parties. Trends do not change much if independents are excluded.)

What is interesting about the chart below is that the ENP fluctuated, first as government was formed following the 2017 elections, and then around the two votes of no confidence (VoNC): the first, which saw James Marape replace Peter O’Neill as prime minister (PM), in May 2019; the second, an unsuccessful attempt against Marape in December 2020.

The ENP has fluctuated because many members of parliament (MPs) change parties during the turbulent times of government formation and VoNCs, with one blog noting that 76 MPs switched parties at least once since 2017. The ENP fell from 9.1 to 4.2 as O’Neill formed government in August 2017, his party, the People’s National Congress (PNC), growing in number from 29 to 48 MPs. The ENP increased to 7.29 during the first VoNC, then rose slightly to 7.34 during the second VoNC. The ENP increased again to 8.2 in 2021, reflecting the aftermath of the second VoNC, before falling to 7.1. 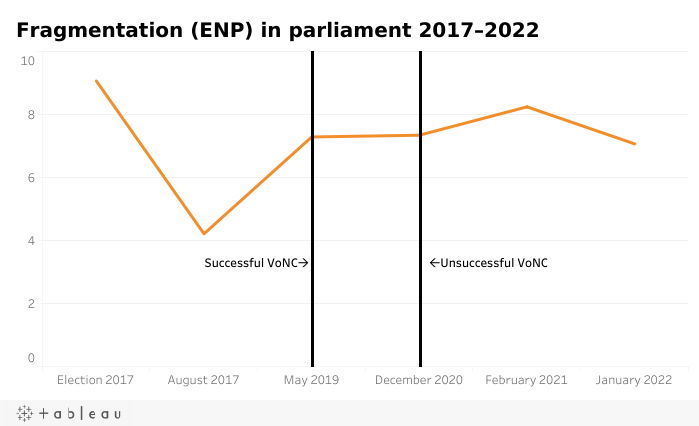 The PNG MP Database also, for the first time, enables fragmentation within government coalitions to be measured. The ENP includes MPs in government that belonged to parties split between government and opposition.

O’Neill formed government with an ENP of 3, reflecting a coalition including the three largest parties: the PNC (with 48 MPs), the Papua and Nuigini Union Pati (PANGU, with 13 MPs), and the United Resources Party (URP, with 11 MPs). The ENP then rose to 6.5 during the first VoNC when O’Neill was ousted by Marape, before falling to 3.5 during the second VoNC.

After the first VoNC, Marape’s PANGU party remained the largest, averaging 29.5 MPs till present. However, his government is more fragmented compared to O’Neill’s, thanks, in part, to the inclusion of several relatively large parties: the National Alliance, the URP, the United Labor Party, and the People’s Party. The government’s ENP rose to 5 in 2021 after Marape’s coalition survived the second VoNC, and has maintained that level till now. 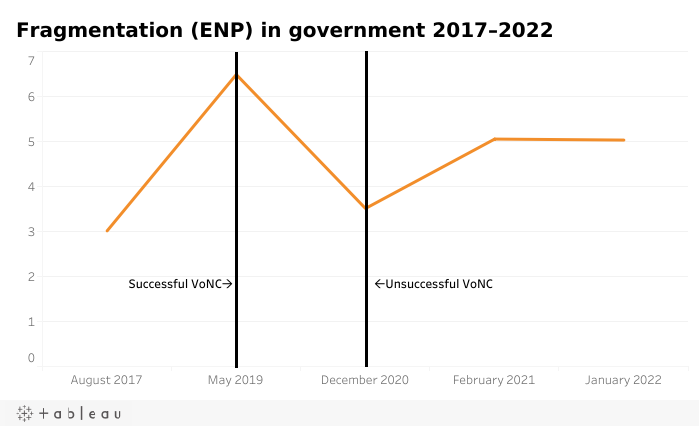 A further measure of fragmentation of government coalitions that can be calculated is the policy coherence index (PCI). The PCI measures the amount of political influence that each coalition party wields, by calculating the probability that ministries are awarded to different parties. Ranging from 0 to 1, a PCI approaching 1 indicates that cabinet is more fragmented across parties. 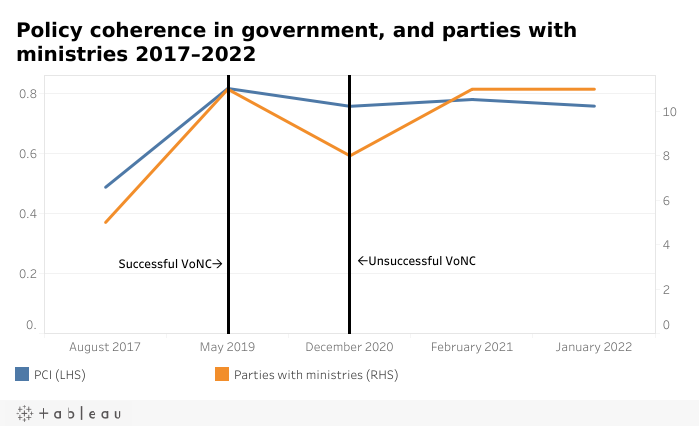 The 2022 elections will likely see many parties elected, making parliament highly fragmented once more. Government, when formed, is likely to be less fragmented as MPs switch parties to join the largest party. However, once the 18-month grace period ends, and another VoNC ensues, fragmentation within parliament and government may once again change.