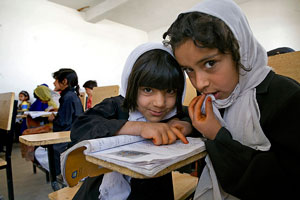 Gender equality and women’s empowerment is one of eight Millennium Development Goals and recognized as central to achieving all the MDGs, the key global commitments on which Australia’s aid program focuses. Although the specific indicators chosen to measure progress on gender equality are inadequate, the MDGs themselves have played an important role in highlighting gender equality and women’s empowerment as core global development priorities (for an overview see here [pdf]).

The Australian Government makes such global commitments real through policies, programs and funding allocations.  Its priorities for 2012-13 and the overall aid policy framework for the four years to 2015-16 were announced on 8 May.  Many NGOs have criticised the Government for stepping away from its promise to increase Australia’s aid to 0.5% of GNI by 2015, a core part of the Government’s commitment to achieving the MDGs. However, Australia’s aid program continues to grow, and so it is critical that we also scrutinise where the Government is focusing Australia’s development assistance.

Gender equality has been a stated objective of the Australian aid program for many years.  A women in Development Policy was released in 1992 and updated as a Gender and Development Policy in 1997, requiring AusAID to integrate a gender perspective throughout the aid program, with the needs, priorities and interests of women and men considered at all levels and stages of development activities. As Patrick Kilby and I have reviewed elsewhere, AusAID, like other development organisations, has struggled to consistently translate policy to practice (the 2009 Review of Development Effectiveness considers this issue in some detail, see here). The Government’s 2011 policy framework, An Effective Aid Program for Australia, confirms gender equality as both a focus of Australia’s development assistance and a ‘cross-cutting theme’ – a way of working to be integrated across the aid program ‑ although the policy statement has its limitations, notably a focus on women, rather than a more systematic focus on gender equality and removing the barriers that perpetuate inequality. The new policy framework has been translated into a new gender strategy, focused around four key ‘pillars’:

Given this policy emphasis, it would be reasonable to anticipate significant programming and expenditure in this year’s  aid budget, and good coverage of gender in Helping the World’s Poor through Effective Aid: Australia’s Comprehensive Aid Policy Framework to 2015-16 (CAPF), the four year planning framework for Australia’s aid.  Ongoing contacts with AusAID and key stakeholders indicate some significant initiatives are planned, particularly in the Pacific.  But the budget itself gives little sense of this. There is less than a page specifically focused on gender equality (in a document of 154 pages). The focus on countries with the most severe gender gaps and constraints is welcome. But it is not at all evident how this will be assessed. This information is vital, given the inadequacy of the MDG 3 indicators and of many other aggregate gender equality measures which provide poor coverage of the circumstances of poor women (The Gender Empowerment Measure, for example, uses indicators that are generally available, enabling broad coverage.  But it focuses on the national level and the formal economy and fails to capture women’s leadership and economic contributions at the local level and in the informal economy).  The budget continues the Government’s focus on addressing violence against women, although here too it is difficult to get a clear picture of what will be spent where, as ACFID notes in its Budget Analysis (p.16), and the level of investment is much less than the scale of the problem warrants, especially given evidence that the recent increase in focus is delivering results.

References to gender equality issues do appear throughout the document, including in describing country contexts and priorities. However, these are often so general that they add limited value.  In relation to Samoa, for example, the budget notes that ‘there is mixed progress on gender equality’ (p.26).

Basic information is not disaggregated, making it impossible to draw conclusions about the situation of women and men, boys and girls.  For example, the section on East Timor notes that ‘gender ratios [are] now almost equal at primary level’ (p.47).  It goes on to say that ‘‘Nonetheless, in 2010, less than 30 per cent of enrolled children completed Year Nine, and it took a child an average of 11.2 years to complete six years of primary school.’  We cannot know from this information how many of these children were girls and how many were boys, although given evidence about the greater time burden facing girls because of their household responsibilities, such information is critical for understanding the issues to be addressed and targeting policies accordingly. Given this, and the scale of investment in education as the ‘flagship’ sector of the aid program, the commitment to disaggregating by gender enrolment, transition and completion rates at all levels by 2014 is welcome (CAPF p.23). Extending data disaggregation across the program is an urgent priority for transparency and effectiveness.

There is limited gender analysis is the presentation of expenditure priorities.  For example, where specific targets for women are identified (‘2.3 million poor people (at least 50 per cent women) will have increased access to financial services such as loans to start small businesses’) there is no recognition that such access, on its own, is rarely sufficient for women’s overall situation to improve (See, for example, Hunt, J. and Kasynathan, N 2001, ‘Pathways to empowerment? Reflections on microfinance and transformation in gender relations in South Asia’, Gender & Development 9, vol. 1: 42-52).

Given the commitment to increase by 30% the proportion of aid delivered through the systems of Australia’s developing country partners by the end of 2014, integrating gender analysis in policy and programming dialogue and supporting the further development of local gender analysis capacity will be essential to ensuring Australia’s commitment to gender equality is realised in practice.  Finding ways to better capture and report such work is critical to enabling AusAID and the Australian community to see how the commitment to gender equality as a cross-cutting theme is influencing Australia’s aid program.

Around one third of Australia’s development assistance is now channeled through multilateral organisations[1].  This includes funding to UN Women of $8 million in 2012-13, making Australia the agency’s second largest contributor.  Multilateral organisations play a key global role. Working with and through them can bring important benefits, including expanding the reach of Australia’s aid program and influencing global policy priorities and ways of working. But as the long-running focus on reform within the United Nations attests, multilateral organisations have their weaknesses.  In March, the Australian Government released its Australian Multilateral Assessment (AMA), which informed the funding decisions in this year’s budget.  The principle of linking support to capacity and performance is sound, and gender is consistently if briefly considered as part of the assessment. However, it is possible for an agency’s performance to be rated as strong despite a qualified assessment on gender, suggesting that gender responsiveness is considered important rather than essential.  A more participatory process involving civil society with first-hand experience of working with various multilateral organisations on the ground might also have led to a different and more rounded assessment.  Gender Action, for example, could contribute to assessing the gender impact of World Bank policies and projects in practice. There would also be value in a wider analysis of the transaction and other costs associated with funding multilateral organisations which then tender for other organisations, including Australian NGOs, to actually deliver programs.

There needs to be a more comprehensive and visible integration of gender in the first Annual Review of Aid Effectiveness, due by the end of October 2012, and in future Budget Statements.  As ACFID highlights in its 2012-13 budget analysis:

It is difficult to evaluate the commitments in the budget… without a clear indication of the amounts allocated to these objectives in country or cross regional programs. While the Aid Review recommended a country-based funding approach, the Panel did not mean for gender to disappear or for Australia to lose any transparency or accountability to gender equality outcomes… There needs to be a better way of tracking gender equality outcomes throughout all areas of the Blue Book.[2]

I would take this further: there needs to be a better way of tracking gender equality expenditure and outcomes across the whole of government. Re-establishing a gender budget process would be a huge step forward in supporting gender responsiveness and policy effectiveness, requiring routine analysis and reporting on how policies, program and expenditure impact women and men (to read more about this concept, see here).  Done well, this would transform accountability and transparency on gender, not just in the aid budget but in all areas of government expenditure.

Jo Crawford is Policy and Research Adviser at International Women’s Development Agency and a Research Associate on a project developing a gender-sensitive measure of poverty, housed at the Centre for Moral, Social and Political Theory at the Australian National University.