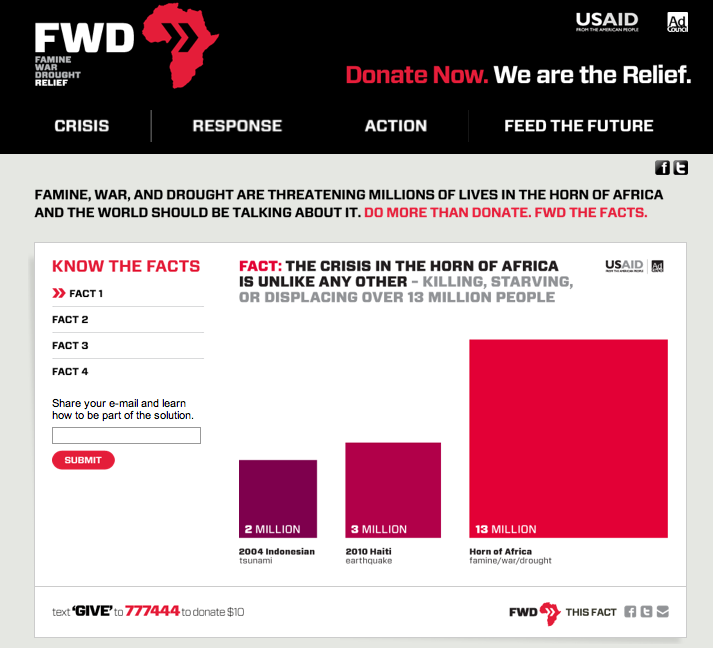 The ongoing Horn of Africa crisis has spawned hundreds, if not thousands, of large and small fundraising campaigns around the world.

However, the response has been sluggish and funds are still significantly below what is needed. In short, the global financial crisis hasn’t helped the humanitarian effort.

To combat this, in addition to running their own programs and sending humanitarian support, government aid agencies such as AusAID and USAID have also been actively encouraging the public to donate funds to try to overcome this shortfall.

This has led to innovative approaches that have seen these agencies take on some of the tactics more commonly associated with the advocacy and fundraising sides of NGOs rather than the bureaucracy.

Big challenges have called for big responses. Celebrating its 50th anniversary this year, USAID has launched its first ever public awareness campaign to spread information and encourage action on the famine crisis.

FWD (an acronym for Famine, War, Drought as well as a call for the digital generations to hit the forward/retweet/share buttons on social media) is a bold, colourful public communications campaign that draws on hard-hitting statistics represented graphically. It also includes YouTube videos, celebrity endorsements, information on the US government response delivered in an accessible manner and step-by-step tools for members of the public to engage in advocacy within their communities.

The catch cries of the campaign are ‘do more than donate’ and ‘we are the relief’.  The campaign even had its own day, ‘FWD Day of Action’ on November 9, which USAID reports garnered 117 million forwards of facts on the famine crisis.

But can forwards be turned into cold hard cash? USAID hasn’t yet mentioned how much has been raised through its SMS donation mechanism (the donations were channelled to 10 NGOs).

The focus of the campaign is squarely on information sharing and encouraging grassroots advocacy. Given the tough financial situation in the States right now, FWD appears to be aimed at subtly moving people to donate by encouraging empathy through knowledge sharing, as well as bolstering support for the aid program in a tough political environment — presently, the US aid budget is coming under fire from GOP presidential candidates in their frequent televised debates and it could also face concrete cuts from a congressional ‘super committee’ tasked with making $1.2 trillion in discretionary savings from the federal budget over a 10 year period.  While FWD is about raising awareness of the Africa famine crisis, it certainly doesn’t hurt USAID to also raise some more support for its programs.

AusAID, on the other hand, has taken a different approach to getting people to open their wallets. The Dollar for Dollar initiative, where AusAID matched any donation to the famine appeals of accredited NGOs over a six-week period, has raised some $3 million so far. This move is an interesting way to tap into the ‘value for money’ mindset — Australians are not doing it as tough as those in the US, but the global financial situation means they still need a little extra encouragement to donate. In a secondary way, the program also serves to validate AusAID’s spending on the crisis, because each public donation is a vote of taxpayer endorsement for Australian aid being channelled to the Horn.

At the same time, the logic of this initiative can also be questioned. With the total Australian aid budget fixed, what the Dollar for Dollar initiative means is that the more individuals give to the Africa famine crisis, the more government aid will go there, and the less to other crises and other places. So it’s not clear what individuals are really leveraging.

While nowhere near as snazzy or jazzy as FWD, AusAID has also been providing fact sheets and information about the famine on its website. It has largely left the communication of this initiative in the hands of partner NGOs, which are drawing on their own networks and using the dollar-for-dollar deal as donations bait.

Both FWD and Dollar for Dollar are innovative ways to encourage private donations for the Horn of Africa during tough financial times. However, are they effective? At this early stage, it is difficult to assess this, especially with only statistics on forwards (rather than engagement with content) and donations. (Did Dollar for Dollar actually increase the volume of private donations? We don’t yet know.) It will also be interesting to see if the FWD campaign sets a public communications precedent that other government aid agencies such as AusAID or DFID may consider following in the future.