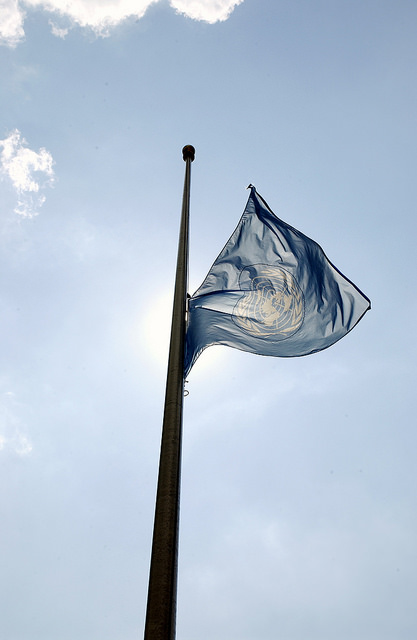 When I was in high school, I was an enthusiastic Model United Nations participant. I was even the President of my school’s Model UN club in my senior year. I was a representative in a mock General Assembly one year, and a mock WHO the following year. It was a great experience, one which encouraged me and my classmates to learn about the procedural intricacies of global governance, to practice public speaking and writing resolutions, and to think hard about the problems facing the world and to workshop potential solutions.

By all accounts the last few years have been rough ones for the UN. It’s been beset by revelations of one scandal after another.

In 2014 it was alleged that French troops serving as peacekeepers in the Central African Republic (CAR) were engaging in the sexual exploitation of children. After senior UN officials failed to take action after being alerted to the abuse, then field operations director for OHCHR Anders Kompass leaked the allegations to French authorities in 2015. UN officials reacted by vilifying Kompass while obstructing French investigations. It took nearly a year for an independent review panel to determine that the UN officials had mishandled the situation.

Last month, South Sudanese government soldiers attacked and raped foreign aid workers, and murdered a South Sudanese journalist, in the Terrain Hotel complex in Juba. UN peacekeepers stationed down a mile the road allegedly did nothing. Secretary-General Ban Ki-Moon has announced an inquiry into the performance of the UN Mission in South Sudan – but whether it will prove any more effective than the inquiry into the handling of the CAR abuse allegations remains to be seen (by this point in this post, it probably won’t surprise you to learn that I’m not optimistic). Moreover, this particular incident has attracted attention and condemnation because its victims included foreign aid workers and journalists – but the South Sudanese civilian population has routinely been subjected to this type of assault, at times in plain sight of UN-endorsed peacekeepers.

And just last week the UN admitted its role in sparking a cholera epidemic in Haiti which resulted in more than 10,000 deaths. After vehemently denying responsibility for years, an explosive internal report leaked to The New York Times disclosed that cholera “would not have broken out but for the actions of the United Nations”. The outbreak was traced to a UN base occupied by peacekeepers who had recently arrived from Nepal; before that, Haiti hadn’t seen a cholera case for over 100 years. Nearly six years later, cholera is still circulating in Haiti. The UN continues to insist it is immune to any legal action and refuses to compensate any victims or their families.

There are ongoing internal problems that the UN needs to face up to as well. For an organisation that is charged with leading the Sustainable Development Goals, and which champions equal rights and human rights, the UN has revealed some embarrassingly regressive human resources policies, exemplified by last year’s uproar over the fact that it flatly refuses to pay its interns. Online development worker discussion boards are rife with anecdotes about the hoops that UN employees regularly have to jump through to access parental leave, pensions, and other entitlements.

When the Charter of the United Nations was signed in San Francisco in 1945, US President Harry Truman remarked to his fellow delegates that the Charter “is a solid structure upon which we can build a better world. History will honor you for it. … With this Charter the world can begin to look forward to the time when all worthy human beings may be permitted to live decently as free people.” Whatever happened to this lofty vision?

Over the next few months, as the selection of the UN’s next secretary-general draws closer, we’re likely to hear more inspiring quotes and anecdotes about the power and symbolism of the UN. To my ears, these kinds of statements increasingly ring hollow in light of what seems to be a pattern of lack of accountability and double standards that its leadership allows, and at times even endorses. While I admire many individuals who work for and support the UN system (I count among them several good friends, and enjoy seeing Helen Clark’s tweets pop up in my Twitter feed), it clearly faces serious structural and institutional problems.

Even if the UN were to manage to get its internal house in order, I find myself sceptical about its effectiveness more generally. Since 1945, the world has undergone profound geopolitical change. The nations and non-state actors which now seem to pose the greatest threats to our security – possibly to our very existence – appear to have no interest whatsoever in engaging with the UN, and blithely ignore its condemnations. At the same time, the UN increasingly seems to be the subject of derision by the leaders (and prospective leaders) of countries which have traditionally championed it, including Australia and the USA. Sidelining the UN will hardly encourage it to clean up its act.

The 71st UN General Assembly (GA) is set to begin on September 13. The agenda indicates the GA will be focusing on addressing large movements of refugees and migrants; antimicrobial resistance; and the elimination of nuclear weapons. I’d recommend also spending some time thinking seriously about institutional responsibility and how to secure the future credibility of the UN.

Whatever happens at the GA, I’ll be watching. I want to like the UN again. I hope it can give me a reason to.