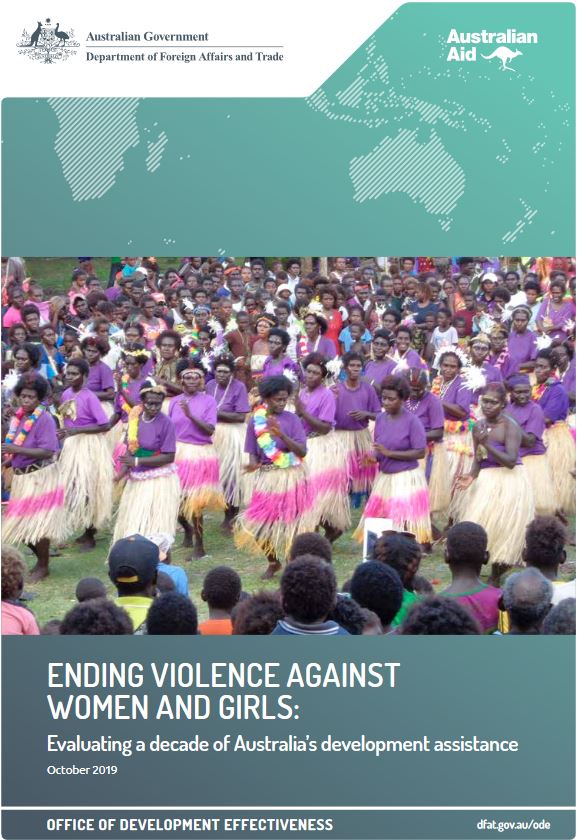 I have been working to address violence against women and girls across the world for over 15 years. Violence against women and girls (VAWG) is such a deeply entrenched and commonplace human rights violation that, sometimes, it feels as if we are not making progress. When I talk to survivors and witness first-hand how violence endangers the lives of women and girls every single day, I can’t help but feel frustrated that change is not happening fast enough. In the midst of the day-to-day struggle, particularly at a time when backlash appears to be on the rise, there are times I feel disheartened.

However, in conducting a strategic evaluation of Australian development assistance for ending violence against women and girls (EVAWG) over the past ten years, I feel hopeful. We examined progress, on a large scale, across multiple countries, over a decade. We travelled to multiple countries across the Asia-Pacific region, reviewed countless documents, and conducted interviews and group discussions with hundreds of people working on the ground, from magistrates to police, healthcare workers to activists, policymakers to religious leaders.

When we widen the aperture, and look at the big picture, we can see just how much has changed. Ten years ago people rarely talked about the issue of VAWG. There was virtually no data and services to respond to the issue were all but non-existent. Now, as one program staff member from Indonesia noted:

“The number of reports of violence against women has increased – that is good. Now they know there is a law to back them up, and now they know where to go. Before, domestic violence was a very taboo issue but now they know. People who used to keep silent, now they are changing.”

Australia has played a significant role, alongside women’s rights organisations, activists, community members and governments, to support these changes. In fact, over the past decade, the Australian Government has increased annual expenditure on EVAWG activities by more than tenfold, investing approximately $300 million as part of its aid program. Australia is now a leading donor on ending violence against women and girls.

The evaluation found that women’s organisations and women’s rights movements have led the work on EVAWG for the past 30 years. They are largely responsible for getting the issue onto the public agenda. Australia has not only maintained but expanded long-term core funding to key civil society organisations that continue to provide critical services, and technical and political leadership. This has been one of the most important and catalytic investments by Australia.

It is important to recognise that the gains made over the past ten years remain highly dependent on Australian Aid. Continued support for national governments and civil society in EVAWG efforts is vital; however, it will be some years before this becomes sustainable without Australian support.

Across the past decade, Australian aid has contributed to EVAWG legislative reforms that have significantly improved access to justice throughout the region. For example, one Judge in Fiji noted:

“Since the DV Act came into force, we’ve seen a huge increase in [protection order] applications, and they are issued more easily…”

Public awareness of laws and rights has increased steadily over the past ten years, yet, implementation remains a challenge. Continued efforts are needed to train justice operators at all levels to sensitively and appropriately apply the laws.

The quality and number of comprehensive services for survivors has improved since 2008 and there is evidence that more women and girls are accessing these services. However, there are still many gaps in coverage, for example in rural areas. Access to tailored services for LGBTQI+ individuals, people with disabilities, and adolescent and younger girls, also remains a gap and continued Australian support is needed.

Preventing violence against women and girls

The number of prevention programs has significantly increased since 2008, along with more widespread acceptance that VAWG is a problem that can be prevented. Many more diverse actors are involved in preventing VAWG in the region including significant investments in community-based approaches, working with faith-based organisations, men, and youth.  There are some emerging examples of best practice; however, prevention is still the least developed sector in the region. Given the scale of VAWG, stopping violence before it starts through effective prevention strategies that tackle the root causes of violence, should be a priority moving forward.

“In our culture, men are on top. But after community conversations, we see some women (especially mothers), more empowered to have a voice, even in their family. Everyone, kids and people with disabilities, and everyone has the right to speak out. Even young girls have more voice now.” – Community-based organisation, Goroka, Papua New Guinea

Building the evidence base

Australia has made an important contribution to building the evidence base in Asia and the Pacific. In fact, the Pacific may now have the largest number of rigorous, comparable prevalence studies of any region in the world. Significantly, these studies have contributed to global evidence, as well as national and regional advocacy efforts. Many people noted that these studies have been vital in getting the issue of VAWG on national agendas.

“The [Family Health and Safety Study] has changed totally everything from 2008 to 2013. There was a huge burst in awareness about the issue. After that, there were more programs and organisations taking responsibility to make awareness.” – Service provider, Solomon Islands

The way forward: a promising future

While we have seen significant progress in EVAWG in the region, there is still a long way to go. To ensure that we do not lose the fragile, hard-won gains of the past decade, Australia must sustain and strengthen funding and leadership, including through regional and flexible funding mechanisms.

It is vital to continue core funding to local women’s organisations to strengthen their catalytic and critical work. Australia should stay the course when it comes to investment in access to justice and support services, with a focus on expanding access in rural areas and for marginalised women and girls.

Now is the time to expand efforts to prevent VAWG, including providing local organisations with long-term funding to address harmful social norms. Building the evidence base and capacity for prevention, as well as promoting more shared learning, is also key.

I am sure Australia will continue to play a vital leadership role in ending violence against women and girls in the Asia Pacific, and support the impressive and innovative work of individuals, communities and organisations on the ground. The lives of women and girls depend on it.