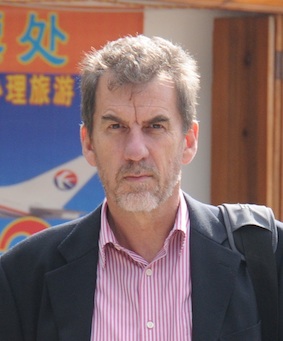 After training as a doctor in Adelaide and then heading overseas looking for adventure 40 years ago, Jim Tulloch has had an illustrious career in global health. Spending more than two decades in the World Health Organization (WHO), he has worked on issues such as smallpox eradication, diarrheal diseases, malaria and child health. Jim was Health Sector Head in the UN Transitional Administration in Timor-Leste, WHO’s Country Representative in Cambodia and Principal Adviser on health for AusAID.

On Australia Day this year, he was made a member of the Order of Australia for significant service to the international community.

Jim spoke with Ashlee Betteridge recently on the importance of investing in health in our region, why it is important to Australia, and whether it’s time to make major changes to the WHO. The following is a condensed version of their conversation.

Ashlee: On Australia Day this year, you were made a member of the Order of Australia for your work. Congratulations!

Jim: Thank you very much. Of course, I’m very pleased to have received the AM. More than anything, I am honored that colleagues thought my work was worthy of consideration.

I’m very happy too that international public health and development got a look-in among the awards. But of course, the ones that really should be acknowledged are the health workers who are out there in the field in inadequate health systems, day in, day out, trying under very difficult conditions to provide services to their people.

Ashlee: As we wait to see where the axe is going to fall in the latest round of Australian aid cuts, why do you think health is an issue that Australia really needs to invest in?

Jim: Many people don’t appreciate just how well-off we are in Australia health-wise compared with some of our neighbors. One example: If you take a girl of 15 years in Papua New Guinea today, during her lifetime she will have a 75 times higher risk of dying as a result of pregnancy and child birth than a girl of the equivalent age in Australia. That’s a huge difference. That huge difference alone should be a reason why Australia contributes to improving the health systems in other countries.

However, looking at it through the lens of national interest ­– a rather selfish lens, if you like, but nevertheless a real one in political terms – it makes sense for Australia to invest in health in the region.

We shouldn’t be waiting until the Asian equivalent of the Ebola outbreak is on our doorstep and then wondering what to do about it. We should be helping countries to make sure they can detect diseases early, and that they have health systems that are sufficiently strong to tackle them once they’ve been detected.

It’s inevitable that other diseases with epidemic and pandemic potential are going to come along. We’ve already seen SARS and avian influenza and the economic damage that’s been done by them. There is multidrug-resistant and extensively drug-resistant tuberculosis in Papua New Guinea, very close to our northern border. It is a reality that health security is something that needs a regional approach, and Australia needs to be very much involved.

But improving health systems isn’t just about detecting and managing diseases. The big challenges, as we know from our own country, are how best to finance the health system and maintain an adequate health workforce that is skilled and motivated to practice good medicine, especially preventive medicine.

Another reason why health care in nearby countries is of national interest is that if we don’t invest in improving health systems in neighboring countries now, it’s inevitable that at a certain point the costs to Australia will be even greater. Take the epidemic of non-communicable diseases in the Pacific Islands, for example. If prevention efforts are not intensified, and even given current predictions, the costs of chronic diseases like diabetes will overwhelm health budgets and Australia is inevitably going to be called on to help. At some point in the future people will be seeking care in Australia, if that’s the only place they can get adequate care.

For both humanitarian reasons and for national interest reasons, we should be working with our neighbors to help them improve their health systems.

Jim: Clearly, we work in a world in which the private sector is a very important part of the mix. That’s true in health, as it is in other sectors.

Ashlee: How do you think the Australian aid program could do better in supporting health systems in the region?

Jim: Health systems are extremely complex and even developed countries like Australia face huge challenges in delivering health services to their population.

The aid program cannot be effective if it changes course every five years. If we are going to help countries strengthen their health systems, we need to be with them for the long haul, and we need to adapt as they move forward and their needs change. So there needs to be predictable funding, not funding that goes up and down and leaves countries in the lurch with half-finished developments.

But more than the funding, we really need expertise within the aid program, and to draw on expertise in universities and other institutions in Australia and the region.

I think that’s where AusAID was really starting to go in the right direction: by recognising that within the ranks of the AusAID staff we needed to have people who were professionals in health in a development context, or in education, or agriculture or other sectors. People who had worked consistently on these topics and had accumulated experience.

With the dismantling of AusAID a lot of that expertise has been lost, and I believe that will be to the detriment of the aid program. Sooner or later we’re going to discover that.

Ashlee: Looking beyond Australia, we published a blog post recently by Joel Negin that asked whether we still need the WHO. As someone who has worked in the WHO for a substantial number of years, I can’t resist asking for your thoughts on this.

Jim: My own view is that the current WHO cannot be reformed. Joel suggested that perhaps we should start from first principles and design a new, more relevant, organisation for world health. That is really the only way to go: knowing well the nature of the Secretariat and the governing bodies and the regional structure, the idea that WHO can significantly reform is, to me, far-fetched. As soon as you try to do something bold through an out-dated structure that has 194 member states broken-up between six regional offices, it just gets bogged down. The self-interests take over. If the main financiers of WHO and the largest developing countries said, “We just want to start over with this”, then it might be possible to design something very different.

So I support the idea of setting up a mechanism to design an organisation fit for the 21st century and then see how we can transition from one model to the other. It wouldn’t be easy but I think if some group of stakeholders could fund that, it would be very worthwhile.

Jim Tulloch AM is a consultant on health and development, currently based in Colombia. Ashlee Betteridge is a Research Officer at the Development Policy Centre.

Jim Tulloch AM is a consultant on health and development, currently based in Colombia.