For those in development, it is not hard to rattle off the names of the big gun NGOs in our sector.

But what about all those small charities out there, working with a specific community or on a niche topic? Are there hundreds of them, or thousands? And where are they sending their cash?

A new report [pdf] released this week from the Curtin University Not-for-profit Initiative gives us some insight into the scale and profile of the Australian charity sector, including those organisations sending money or working overseas.

The report, which bills itself as the first comprehensive report on charities in Australia, is based off the Annual Information Statements submitted to the Australian Charities and Not-for-profits Commission (ACNC) for the 2013 financial year. It has been supplemented with 2012-13 data from the Australian Taxation Office and the Australian Business Register, with a total sample size of 38,341 charities.

The report tells us the following:

In total, 6,476 charities or 17% of all reporting charities indicated they were involved in some way internationally. This could include sending donations or other aid or more active involvement.

… 2,402 (6%) specifically reported one or more country outside Australia where they were active and most of these are developing countries.

The countries where these charities work are listed in the table below: 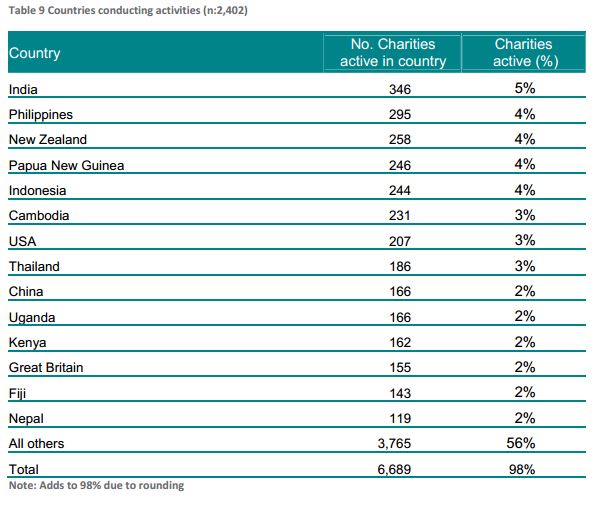 From the above, we can see that countries in our region fare best (though some developed countries are also receiving similar attention, a reminder that not all of the charities working overseas are involved in aid and development work). Uganda and Kenya are the African countries that Australian charities are most involved with.

So is this aid fragmentation at its worst or community spirit at its best?

While this is still an incomplete picture, and we have little information on the types of contributions these charities make (are they smaller community-based groups raising funds for larger international NGOs, do they run projects or are they just fundraisers, are they predominantly religious groups?) it is still clear that there are many small charities throughout Australia contributing to the overseas aid effort, far more than those captured by bodies such as ACFID (which had 126 members in 2013), schemes such as the ANCP (43 recipients in 2013-14) or OAGDS  (212 registered relief funds in 2012-13).

And while the figures in this report measure the number of charities and not volumes of giving, it is worth noting that the 14% of charities listing ‘communities overseas’ as their beneficiaries is not too far off the 2005 Giving Australia report [pdf] estimate that donations for international aid and development organisations made up around 12.5% of Australians’ charitable donations.