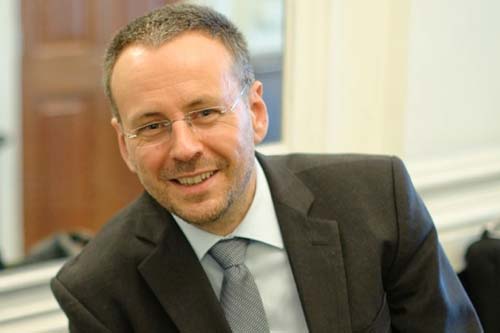 Vincent Bernard is the Geneva-based head of the International Committee of the Red Cross (ICRC) Forum for Law and Policy, and Editor-in-Chief of the International Review of the Red Cross. During his recent visit to Canberra as part of the ICRC’s global cycle on the principles guiding humanitarian action, Vincent sat down with Camilla Burkot to discuss the militarisation of aid and the role of humanitarian actors in contemporary conflicts. The following is an edited transcript of their conversation; you can also listen to the podcast here, and read the full transcript here [pdf].

Camilla: Vincent, thank you for taking the time to speak with me. To start, perhaps you could give us some background on this topic. Are militaries increasingly involved in delivering humanitarian assistance?

Vincent: Time and again you see the military involved in providing relief; it’s quite common in situations of disasters, we also see it in conflicts. The military definitely has a role to play – for instance, in the evacuation of wounded civilians, and in making sure that the civilian population is spared from fighting.

Camilla: You mentioned two kinds of situations where the military might be involved in humanitarian aid: disaster relief and active conflict situations. The latter seems to be much more problematic.

Vincent: Absolutely. People may not realise that providing humanitarian assistance in situations of conflict is not something that is easily done. It’s a space you need to negotiate. Humanitarian actors, like ICRC and other humanitarian organisations, face lots of challenges in today’s conflicts, which are often of a non-international character. They are with armed groups, which are often very fragmented. It’s difficult to know where the chain of command is to get the security guarantees we need to operate. In some regions, the state is totally absent and crime proliferates around the conflict or as part of the conflict. These are often extremely dangerous environments.

Camilla: The issue of trust seems critical. But are there situations in which humanitarian groups might want to partner with militaries?

Vincent: Well, militaries can do lots of good in emergency situations, because they have logistics. They have a capacity to mobilise that few other actors have. In situations of disaster or certain situations where there is a clear distinction between what the military is doing and what humanitarian actors are doing, it’s perfectly fine to have military actors delivering humanitarian assistance. Indeed, under international humanitarian law, the Geneva Conventions, they sometimes have an obligation to do so.

Camilla: Is there increasing engagement to help humanitarian organisations and militaries to work better together, or to communicate better with each other?

Vincent: The ICRC has been trying consistently to work not only with military forces but also all sides in conflicts, including non-state armed groups, to establish this trust and the capacity to work in the same area. I think this dialogue is extremely important, so that we understand each other and our constraints.

Camilla: In addition to conflicts becoming more complex, it’s my impression that we’re also seeing more protracted conflicts, and more conflicts where there is a blurring between humanitarian assistance and long-term development. It seems to me that this adds another layer of complication to how these various groups interact in conflict settings.

Vincent: That’s a very important point you’re raising because it’s true that protracted situations of conflict and long-term occupations – as we see for instance in the case of Israel and the Palestinian territories – create situations that are extremely complex for humanitarian actors.

It creates a dilemma for them, a choice to make between answering to the needs of the population, in terms of assistance or protection, and the temptation to address longer-term problems, which are sometimes related to the lack of governance, or the lack of capacity of the state to provide services such as education and healthcare. It’s difficult to make this distinction.

But I think it is important for humanitarian actors to stick to humanitarian mandates. While sometimes, of course, they need to expand and address new types of problems, it is important that they don’t mix with other agendas, which could be related to the rule of law, the building of a different society, the implementation of international human rights, or other agendas of the international community in terms of development, or regime change. Issues that may be very good and valid, but that could be perceived by local actors as transformative, or against cultural or traditional ways of life.

Camilla: Agendas and issues that often have quite a lot of political and power implications in those situations.

Vincent: Indeed. But of course for humanitarian actors it’s a fine line because how can they not perceive the need for education of these populations, or the need for better healthcare? So we need complementarity. We need to respect the space of humanitarian actors, and not give humanitarian actors too large a mission simply because they are present and they have the capacity to operate. But we also need to find a space for other actors to come in. And it’s extremely difficult in situations of conflict and violence.

Camilla: So how can we find that space?

Vincent: Well, there’s a dialogue to have. Very often we hear about the exit strategies of humanitarian actors in situations of long-term crisis. But we should also reflect about entry strategies of development actors.

In the past few years we’ve seen efforts by the international community to build integrated responses to crises, and integrate humanitarian action within a larger package of measures, which range from the building of a proper judicial system, to trying to work on gender equality, and developing social or economic mechanisms.

However, we think that humanitarian actors and humanitarian action should be kept separate from these other agendas, even though we may all agree that they may be necessary.

Camilla Burkot is a Research Officer at the Development Policy Centre. Vincent Bernard is head of the ICRC’s Forum for Law and Policy and Editor-in-Chief of the International Review of the Red Cross.