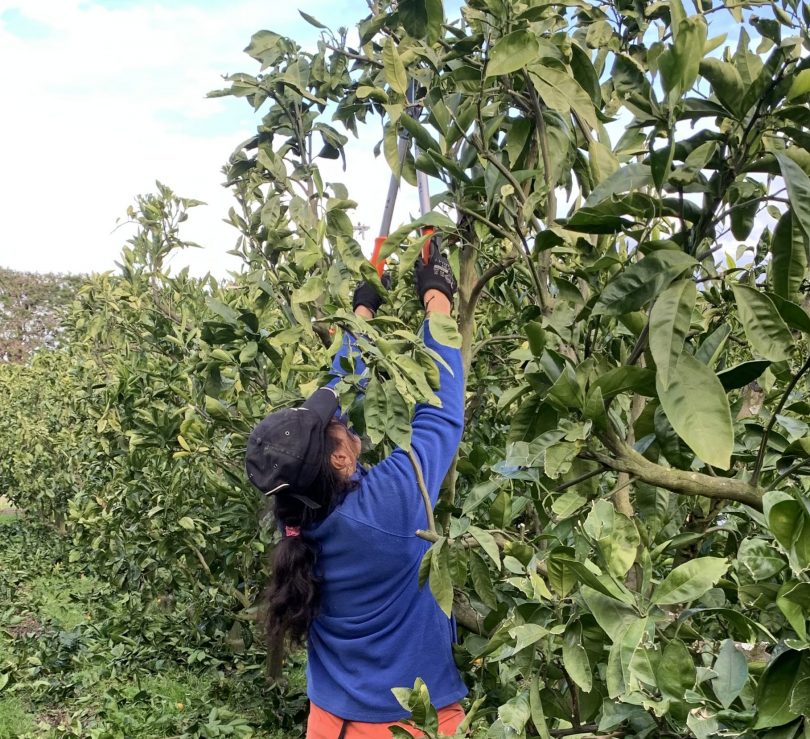 On 1 August 2021, 16 months after New Zealand and Kiribati closed their international borders in response to the COVID-19 pandemic, all of the 286 I-Kiribati workers then in New Zealand, a third (97) of whom are women, remain in the country under the Recognised Seasonal Employer (RSE) scheme. There has been no pathway home for any of these workers.

Nearly all of the 97 women were originally employed on five to seven-month contracts. For the 186 men, around 60% had eight to nine-month contracts, with most of the remainder expecting to work for six months. When making household arrangements for their absences in late 2019-early 2020, none of the men or women could have imagined spending more than 18 months away from their families.

In this two-part blog we outline some of the experiences of 47 of the I-Kiribati women who we have visited repeatedly since June 2020 to talk about their extended stay. Around half of the women were previously interviewed as part of the RSE Impact Study in South Tarawa in 2019. At the time of the 2019 interviews, all of the women had been employed for the 2018-19 year and were keen to return to New Zealand for the next season.

For the 2019-20 season, the 47 women, who are all employed by the same primary RSE, were recruited in three groups. They were employed on five to six-month contracts due to finish in autumn or early winter 2020. Their employer operates in the Auckland and Northland regions harvesting berries, citrus and vegetables, and one group of 18 women is shared with another RSE via a joint agreement to recruit (ATR). The second RSE is a kiwifruit producer in the Bay of Plenty. Ten of the women, who work as a group harvesting vegetables in Auckland, are mainly new recruits. The other two groups are a mix of returnees, with three of the women returning for their eighth successive season in 2019-20.

Without a viable repatriation pathway, the 47 women have worked continuously for the same two RSEs since they entered the country, and Immigration New Zealand has granted successive RSE visa extensions to ensure the women remain legally resident.

By July 2021, the women had been employed for between 18 and 21 months; at least three times the length of their original contracts. For the women, and the RSEs who oversee their pastoral care, there have been some benefits, as well as challenges, to the longer than anticipated periods in New Zealand.

One of the benefits has been the broadening of the women’s horticultural experience. In efforts to keep the women continuously employed for 30 hours per week, as per the RSE policy requirements, the RSEs have shifted the women between different crops and tasks. In doing so, the women have picked up new skills in harvesting, pruning and maintaining a variety of crops, and the RSEs now have a more widely-experienced female RSE workforce. The opportunity to earn a seasonal work income for an extended period, and to save and send money to family in Kiribati, is another significant benefit.

Over the past year, the women have lived in different types of RSE accommodation, giving them the opportunity to assess the strengths and weaknesses of different sorts of living arrangements for seasonal workers. They’ve also lived in different local communities and established new connections, especially with members of the resident I-Kiribati communities near Auckland and in the Bay of Plenty.

The links between I-Kiribati RSE workers and members of the diaspora have strengthened over the past year and resident I-Kiribati in New Zealand have played a major role helping the I-Kiribati workers, and their employers, deal with wellbeing issues that have arisen.

For the women, the long absences from home have presented a range of social and health-related challenges. In a ‘normal’ year, seasonal workers experiencing significant personal difficulties or dealing with family emergencies have been able to return home. This is the first year since the RSE scheme began that this self-regulating adjustment to personal and family problems has not been possible.

Some of the main issues facing the women include: physical and mental exhaustion from months of continuous work doing hard, physical jobs in the orchard and the pack house; living together communally in shared accommodation for much longer than the usual six months; the need for social interaction beyond the immediate group and the unintended consequences of sexually transmitted infections (STIs) and, in some cases, unplanned pregnancies and births; and continuing to manage relationships with family in Kiribati.

In the next blog in this series, we examine how the I-Kiribati women and their employers have negotiated these various challenges.

This is the first blog in a series on #I-Kiribati women workers in NZ.

Rena Tekanene is a former senior official in Kiribati’s Ministry of Health and now resides with her family in Auckland. She was an adviser and interpreter for interviews with I-Kiribati workers as part of the RSE Impact Study in 2019 and continues to provide support to one of the main employers of I-Kiribati seasonal workers in New Zealand.