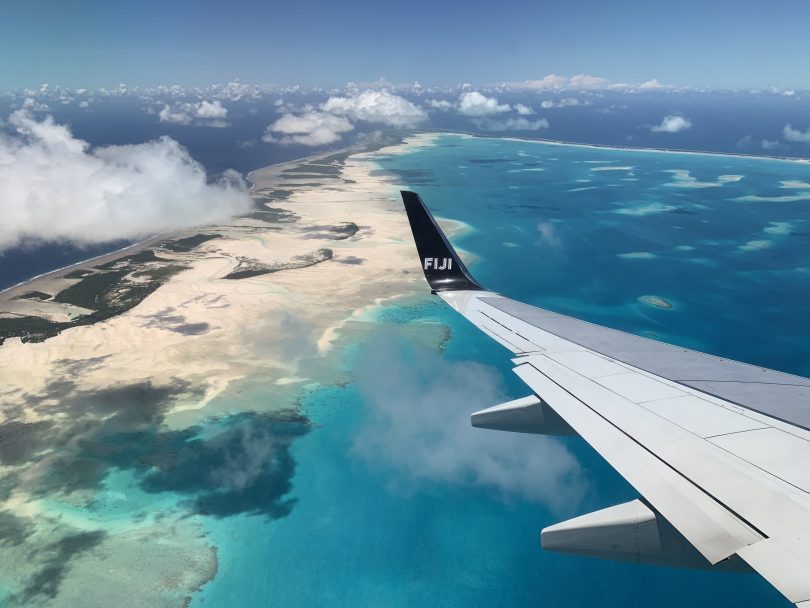 When New Zealand closed its international border on 19 March 2020 following the onset of the COVID-19 pandemic, over 10,000 Pacific seasonal workers were in the country under the Recognised Seasonal Employer (RSE) scheme. Over the past year, one of the most significant and complex aspects of the RSE scheme’s operation has been the repatriation of Pacific RSE workers who have sought to return home. The repatriation efforts which began in late June 2020, have been led by New Zealand’s Ministry of Foreign Affairs and Trade (MFAT) in close collaboration with horticulture industry groups and Pacific officials.

By early August 2021, 65% (6,551) of the 10,078 Pacific RSE workers in New Zealand in March 2020 had been repatriated. Of those, just under 50% (3,183) were to Vanuatu, with over 1,000 supported by New Zealand Airforce flights; the only publicly-funded repatriation flights from New Zealand to date. For the remaining ni-Vanuatu workers, and for RSE workers returning to other countries, commercial operators or charter flights have been used. Over 75% of RSE workers from Vanuatu, Solomon Islands and PNG had returned home by August. More than 60% of Samoan RSE workers had also been repatriated, along with over 50% of workers from Tonga and Fiji. 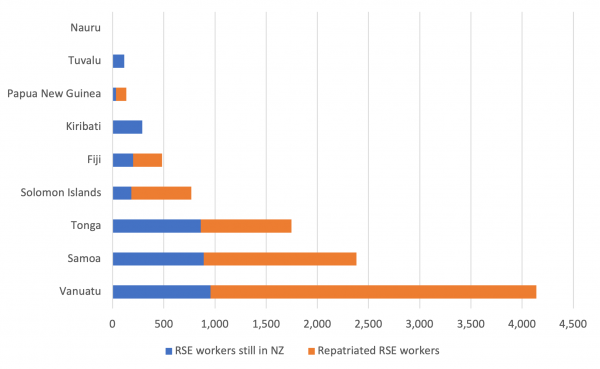 The repatriation program continues to be operationally and logistically challenging for MFAT officials. Barriers include: changing entry and quarantine requirements by Pacific governments, for instance the Samoan and PNG governments’ requirement from 1 July for all returning nationals to have full COVID-19 vaccination for entry; limited managed isolation and quarantine (MIQ) capacity in Pacific countries which must cater for all returning nationals, not just RSE workers; lack of available flights and the associated costs, as well as, in some countries, the costs of up to 21 days’ MIQ which must be borne by returning RSE workers.

Prior to New Zealand’s community outbreak of COVID-19 on 17 August, there were repatriation pathways into most Pacific countries, despite the barriers. Only three countries – Kiribati, Tuvalu and Nauru – have had no repatriations to date, partly due to the lack of direct flights between New Zealand and these three central Pacific countries.

For RSE workers who have had a repatriation pathway, they’ve had to decide whether to return home or stay on for another season to earn money to support their families. This has been a difficult decision for many workers as they weigh up the trade-off between the social costs of extended absence from family, and the financial gains of ongoing seasonal work in New Zealand. Recent estimates by horticulture industry groups suggest around half of the approximately 4,000 ‘long-term’ Pacific RSE workers who entered prior to March 2020, and were still in the country in August 2021, want to return home before the end of this year.

For 286 I-Kiribati RSE workers who entered New Zealand late in 2019-early 2020, and have now been in the country for more than 18 months, there is no viable pathway home. Up until Fiji’s community outbreak of COVID-19 in April 2021 and the associated suspension of international air travel (for non-medical purposes) to/from Fiji, there was a possible route home for Kiribati nationals via Fiji. But RSE workers and their employers did not take this option largely because of the costs involved and uncertainties around the availability of seats on the periodic charter flights between Fiji and Kiribati.

The return of RSE workers has been deemed low priority by the Kiribati government in light of limited MIQ capacity (now a total of 175 places) and the need to allocate places to other I-Kiribati nationals arriving home, including via sea. Returning to Kiribati via Fiji required RSE workers to spend a month in MIQ – two weeks in Fiji and two weeks in Tarawa – at their own expense, and an indeterminate amount of time in the community in Fiji while waiting for a charter flight to Kiribati. With the outbreak of COVID-19 in Fiji this pathway has closed.

MFAT officials have been working to negotiate an alternative route home for I-Kiribati RSE workers, but without direct flights between the two countries it has proved extremely difficult. Before New Zealand’s latest COVID-19 outbreak, the use of New Zealand Defence Force assets to return I-Kiribati workers was being explored. Chartering a flight was another option, but questions remain as to who would cover the costs. It would be unfair for the costs to fall on employers and RSE workers when both have already paid their share of a return airfare under the original RSE employment contract. Flights via Brisbane were being considered, but this route is complicated by Australian visa requirements, and the need for workers to undertake two weeks’ MIQ in Brisbane at the workers’ expense. Recent outbreaks of COVID-19 in Australia have terminated this option in the short-term.

Ultimately the decision rests with the Kiribati government to facilitate the return of their nationals; it is not a decision MFAT can make unilaterally. To date, the general view held by Kiribati officials seems to have been that I-Kiribati RSE workers are better placed in New Zealand, where they are employed in full-time work and earning a decent income, rather than in Kiribati where employment opportunities are limited. While Kiribati remains free of COVID-19, New Zealand’s present outbreak complicates matters further.

The situation is, however, becoming urgent. RSEs and pastoral care hosts of I-Kiribati workers are under significant strain, providing wellbeing support to workers for much longer periods than the usual length of the RSE visa (up to 9 months for I-Kiribati workers). They are also dealing with complex wellbeing issues, such as pregnancies and childbirth, as I-Kiribati workers establish relationships in New Zealand. There is a need for culturally appropriate counselling services to be available to workers who may need help, as well as support for RSEs and pastoral care hosts who are dealing with wellbeing issues with which they have no prior experience.

The return of I-Kiribati workers who have urgent needs for repatriation should be a priority consideration for the Kiribati government once New Zealand’s COVID-19 outbreak is eliminated. Kiribati officials should also consider the potential damage the continued lack of a repatriation pathway may do to the longer-term prospects of RSE recruitment from the country. RSEs are unlikely to risk bringing in I-Kiribati workers in future if they cannot guarantee their return home. Kiribati is not participating in the 2021 RSE border exceptions, due in part to the lack of a clear repatriation plan, nor is it part of New Zealand’s recently announced travel corridor with select Pacific countries.

To support the wellbeing of I-Kiribati RSE workers and their employers in the immediate future, and to remain a player in the RSE scheme longer-term, the Kiribati government needs to prioritise a direct repatriation pathway from New Zealand for its stranded seasonal workers as soon as it is safe and feasible to do so.