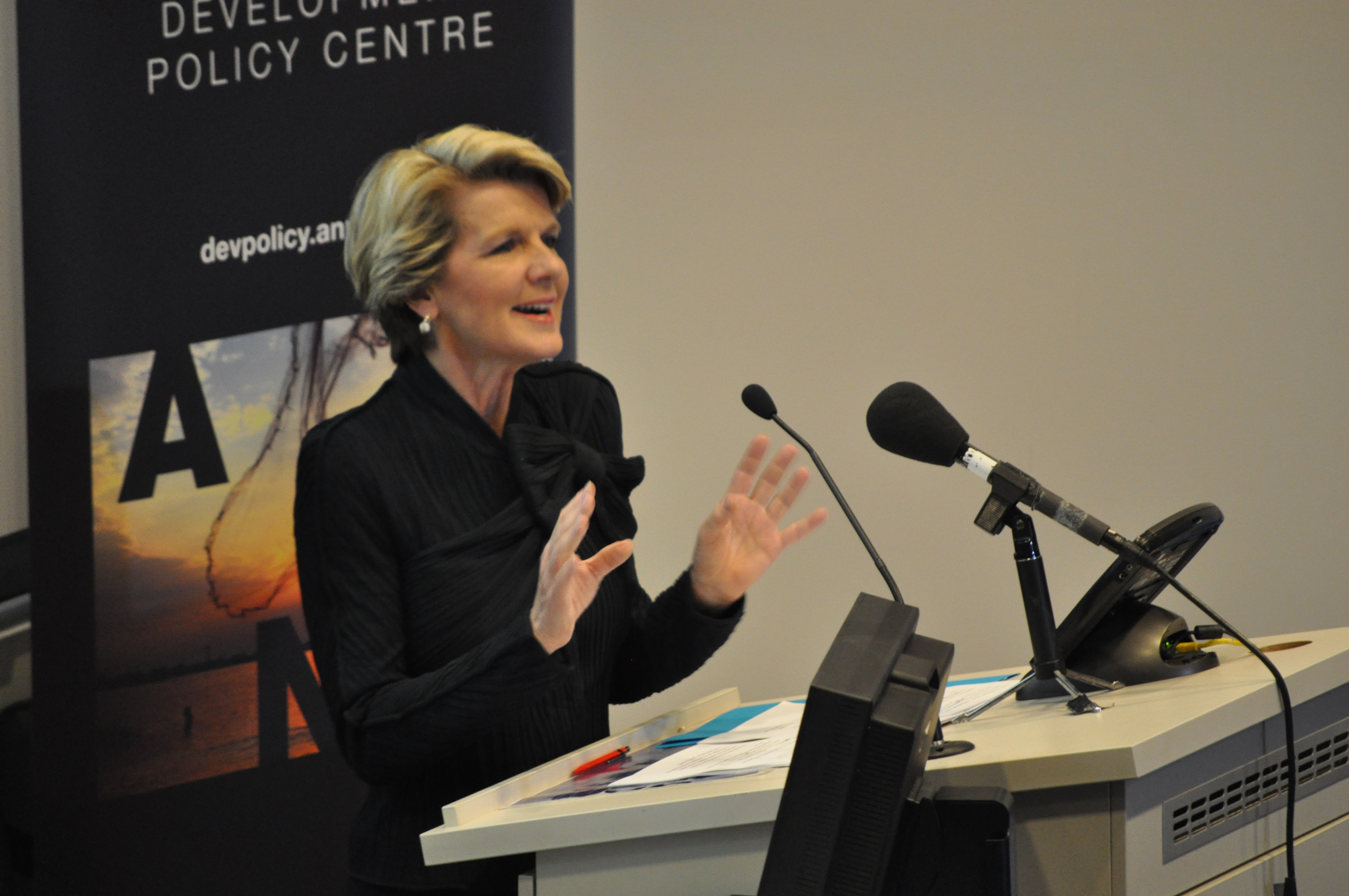 Taken together, Bishop’s speeches on aid tell a story about the type of aid policy she believes Australia should pursue. Central to the plotline is the term ‘economic diplomacy’. Recognising this is the key to understanding her approach. Economic diplomacy functions as Bishop’s conceptual organising principle, guiding how she understands aid must function as a tool of foreign policy. In their 2013 election manifesto [pdf], the Coalition signalled it would focus more on securing Australia’s economic interests abroad. In Bishop’s first key address on aid, six weeks in to her tenure, it was apparent this vision for foreign policy would reshape aid policy. However, Bishop’s intentions were, at this early stage, expressed in forgettable bureaucratese:

“The Government’s approach to economic diplomacy brings our aid program together with our foreign and trade policy priorities in the pursuit of broader economic development, which will not only support prosperity and growth in Australia but of course in the wider region” (Speech 1).

By the time she delivered the opening address to the Australasia Aid Conference in February 2014, Bishop had refined her message, chiefly by formulating a pithy and memorable way to express her guiding principle: “Just as traditional diplomacy seeks to promote peace, economic diplomacy seeks to promote prosperity.” To my knowledge, the 2014 Aid Conference speech was the first time Bishop used this summation of her policy agenda. But from this point on, she would deploy it extensively in speeches, opinion columns and media appearances. So, too, would others, including Parliamentary Secretary Brett Mason and Secretary of the Department of Foreign Affairs and Trade, Peter Varghese. By April 2014, it was clear Bishop had decided to cast herself as “Minister for Economic Diplomacy”. In August, this focus was further embedded into the Government’s international policy with the launch of the Coalition’s Economic Diplomacy Policy.

As well debuting Bishop’s signature phrase on economic diplomacy, the speech to the 2014 Aid Conference was also where she first began speaking of a ‘new aid paradigm’:

“Our aid program can succeed in this new paradigm because when we get it right we can make a real difference and in doing this, focus on our region.”

Only five months later, the ‘new aid paradigm’ had come to mean something entirely different. The speech to the National press club in June 2014 is – and remains – Bishop’s clearest and most complete statement on aid. She began it like this:

“Today I am pleased to launch the Government’s new aid policy and performance framework, which I do refer to as the ‘new aid paradigm.”

The ‘new aid paradigm’ had now become the name of Australia’s policy response. Earlier it had been used to refer to the rapid global changes to the aid regime which necessitated a policy response. What’s more, between February and June of 2014, the term endured an interim evolution. It appeared in the title of Bishop’s speech to the Victorian Parliament in such a way that it seemed that perhaps the ‘new aid paradigm’ referred simply to a strategy of “harnessing the private sector”.

If she was able to have her time again, Bishop would have been better off avoiding definitional ambiguity altogether and choosing a different name for her policy response. For one thing, it would be useful to retain ‘the new aid paradigm’ as a catch-all term readily available to use when referring to the rapidly changing international context for aid. Continuing to use it this way would also have been helpful in reinforcing the rationale for policy change. The term will remain confusing given it will continue to be used by development specialists to mean something different.

The moral of the story

Bishop’s four speeches on aid over her first year in office reveal a concerted and ongoing effort to recalibrate Australia’s aid policy. It is evident she took office with strong ideas about she wanted to change and that these ideas had been developed in her speeches on aid delivered in Opposition. Fundamental to Bishop’s vision for aid is her deep conviction that economic growth is the real driver of poverty elimination. “Fighting poverty,” she argues, “starts with economic growth.” This belief pervades her thinking on aid. It explains why, for Bishop, aid is an investment that must deliver returns to Australia. It explains why her speeches are filled with the language of investment. It explains why Bishop embraces innovation in the aid program, along with her desire to see aid used to promote the role of the private sector to create economic opportunity in our neighbourhood: these are ways to further unlock returns on the aid investment. Most crucially, it explains why she has no hesitation in viewing and framing aid as a means to achieving Australia’s economically-focused foreign policy ends.

All of this means Bishop espouses an especially coherent foreign policy, at least superficially. Under Bishop’s oversight, each realm of our foreign policy – trade, diplomacy, foreign aid, security – align towards the achievement of a single objective. There’s an undoubted attraction to this neat strategic formulation but significant danger too. Underneath this surface level coherence lurks unresolved tensions which Bishop has glossed-over. I’ll mention two here, one specific to aid policy and another more general.

First, while economic growth clearly reduces poverty, the link between how (and even whether) aid contributes to economic growth is much more contentious. Most agree aid is becoming less relevant to achieving development. Yet Bishop seems reluctant to embrace the ‘beyond aid’ agenda. By not doing so, she risks missing an opportunity to expand the scope of what aid could catalyse in the region. Increasingly, aid is viewed international as a tool with the flexibility to function in new ways that could bind members of the region together in cooperative ways that extend beyond economic relations. The other implication of the beyond aid agenda is to realise that our trade, immigration, environment and security policies all do more to shape the development prospects of our neighbours than our aid policy itself.

Another risk to pursuing an economics-led foreign policy is that it becomes one dimensional, especially as viewed by our neighbours. As a “top 20 country”, shouldn’t our global role also be defined by a commitment to commensurate burden sharing? Given our relatively strong economic position, at least relative to much of the West, there’s a chance our single-minded foreign policy approach comes across as unnecessarily self-indulgent for a country of Australia’s standing.

A story for whom?

In telling her ongoing story on aid, Bishop is likely conscious of speaking to at least three key constituencies: the public, the development community and her party. This unavoidable balancing act likely goes some way to explaining why some of the tensions highlighted above remain.

The following two excerpts show that Bishop feels the tension between the imperative to convey a simple and convincing narrative to the public and her party, but also recognises that the very nature of aid policy means it resists reductionism:

“The greatest danger to Australia’s development assistance is that it loses the support of the Australian public and/or the people of recipient nations” (Speech to the Development Policy Centre, June 2012).

“I stress that I am not seeking to oversimplify the development challenges that I know are complex and vary widely between individuals, societies and nations. I am seeking to stress the fundamental philosophical position of the Coalition, that there must be a firm focus on building the capacity for self reliance and on economic growth” (Speech to the ACFID dinner, October 2012).

Of course, all the speeches analysed here and in part one of this post were delivered before the announcement of the biggest ever cuts to Australia’s aid budget severely dented Bishop’s credibility on aid. In effect, the cuts provided a stark appraisal of these speeches: Bishop’s partyroom colleagues did not buy her story on aid. As a result, these cuts and the decision to merge AusAID into DFAT will undoubtedly colour, and likely dominate, Bishop’s aid legacy.

Unfortunately, it’s hard to escape the conclusion that the recent aid cuts are just the latest examples of Peter Hartcher’s concern that, in Australia, international policy is used too often for domestic point scoring. Amidst the need to demonstrate a commitment to austerity, the aid budget provided the most politically painless target, twice. Still, this does not alter the reality that Bishop, in her first year as foreign minister, moved quickly and effectively to recast the development discussion in Australia. Perhaps, more than anything, what her story serves to highlight is the inherent challenges in formulating, articulating and selling aid policy.