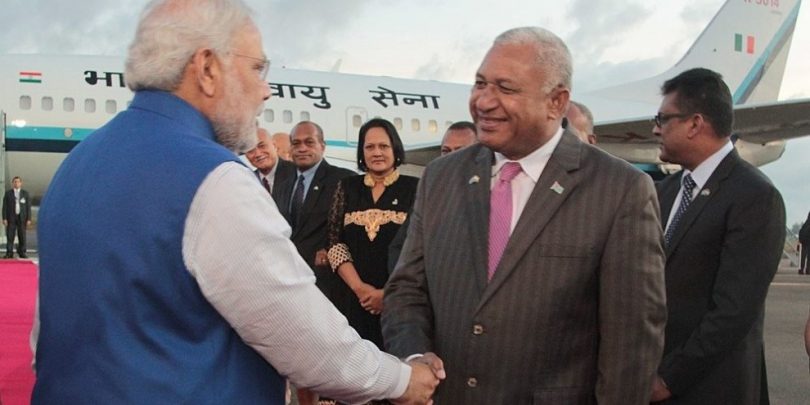 India is a non-traditional donor in the Pacific and has only recently stepped up its presence in the region. In monetary terms, India committed US $134 million in aid to the Pacific from 2014-18, against a commitment of billions by Australia (US $6.7 billion) and China (US $5.8 billion), the two largest donors to the Pacific.

In 2014, India launched the Forum for India-Pacific Islands Cooperation (FIPIC) in Suva, Fiji, initiating a region-wide dialogue mechanism with governments of 14 island countries of the South Pacific. The summit-level talks were envisaged to be held at regular intervals, providing a platform for the Pacific leaders to articulate their development needs to India, so that India’s development assistance to the region can be demand-driven and response-oriented. So far, three FIPIC summits have been held: Fiji (2014), Jaipur (2015) and Fiji (2017).

India has focused its aid and assistance projects in the region on the areas of skill development, capacity-building and renewable energy. These are sectors in which India has a comparative advantage, being a lead provider of skilled labour to the global information and communications technology industry, and a founding member of the International Solar Alliance along with France in 2015 at the Paris summit.

According to the Lowy Institute’s Pacific Aid Map, India had a total of 105 ongoing and completed projects in the Pacific between 2011 and 2018. Over these years, a little less than half of India’s total aid to the Pacific was targeted towards Fiji (43.9%), while Papua New Guinea came in second, cornering 16.2% of total aid committed to the region by India. India’s predisposition towards Fiji is underlined by the deep cultural and historic ties shared with the country. As of today, around 37% of the country’s population is comprised of Indo-Fijians, whose ancestors were forcibly taken from India to work as indentured labourers (girmitiyas) in the colonial sugar mills in Fiji. The current generation of Indo-Fijians takes pride in their connection with India and serves as a valuable conduit to enhance bilateral ties between the two nations. The Indian diaspora forms an indispensable part of Mr Modi’s vision to spread India’s soft power.

India’s interests in the Pacific

Indian Prime Minister Narendra Modi’s visit to Fiji in 2014, the year he came to power, ended a 31-year hiatus since Indira Gandhi’s visit to the island in 1983. The South Pacific has been largely absent from India’s foreign policy priorities and was only given a new lease of life under the current Modi dispensation. The reasons for this are mostly geopolitical and strategic in nature, dovetailing with a recent shift towards a more proactive “Act East” policy (instead of the earlier “Look East” policy in operation from 1992 to 2014), as well as a focus on a maritime-based foreign policy articulated by Mr Modi in his Shangri-La Dialogue address in June 2018.

The Pacific forms an intrinsic yet oft-ignored other half of the wider Indo-Pacific construct gaining prominence among policy circles of late. These islands straddle vital sea lanes of communication connecting Australasia with the American continents, integral for the free and unimpeded flow of international trade via the seas.

Some of these islands are also endowed with an abundance of minerals and hydrocarbon wealth, especially Papua New Guinea, where large reserves of natural gas were discovered in the Southern Highland Province. India, which imports 80% of its crude oil requirements, is progressively trying to shift away from an oil to a gas-based economy, both for environmental and fiscal compulsions.

Most significantly, India’s engagement with the Pacific is immensely beneficial in multilateral organisations such as the UN, where 12 out of 14 Pacific island states have a vote. Apart from eliciting their support on crucial resolutions that India tables in these forums, India has also been wooing them to support India’s permanent membership of the UN Security Council.

The Pacific is also valuable for its unique geographical location, which serves as an ideal ground to monitor satellites launched into space and to gather signals intelligence for military operations. For the 2014 Mars mission of the Indian Space Research Organisation (ISRO), the first attempt by India to send a satellite to Mars, some scientists were placed in Fiji to track the satellite. With ISRO’s recent forays into the commercial space segment, Mr Modi’s announcement of building a space application centre in one of the Pacific islands will prove immensely useful. It is also envisaged to provide services like tele-medicine and tele-education to the South Pacific.

The Indian aid program in the Pacific is often criticised for being very small and inconsequential and is notorious for its large implementation delays. From 2014 to 2018 India only spent 24% (US $32 million) of its aid commitment. India’s flagship Indian Technical and Economic Cooperation program has allocated 1,000 slots over this period to the 14 island countries for training civilians in different skill areas, but many of these slots are not availed by countries, either due to lack of information about the program or the large geographical distance from India (where the skills training takes place).

Even on the aid and development assistance already disbursed there is a dearth of project monitoring and effectiveness indicators/reports. This is compounded by the fact that India’s aid program in the Pacific is just an extension of its flagship development assistance programs already being implemented in other developing countries, and is aimed at furthering South-South cooperation.

Given the increasing (re)emphasis on the Pacific by regional powers such as Australia, New Zealand, China, France and the US, the geopolitics of the Pacific islands are becoming increasingly complicated. Even though India is not a part of this league of big players in the Pacific yet, its strategic imperatives will compel India to expand its presence across the region in the near future, especially to elicit the support of these island nations on multilateral forums and to halt Chinese influence from proliferating further into the maritime Indo-Pacific domain. With India’s quest for a permanent seat on the UN Security Council, India will focus on further strengthening its South-South cooperation model to garner support from two-thirds of the UN General Assembly, a platform where the Pacific islands contribute a significant 12 votes.

Bhavya Gupta is a Visiting Fellow at the Crawford School, ANU, under the National Parliamentary Fellowship Program.