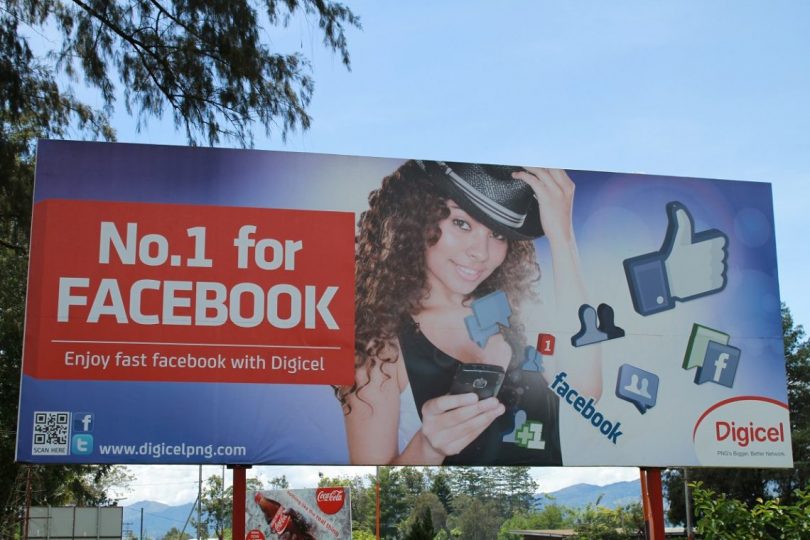 When you clicked on this blog post to open it, did you think about how much money it would cost you for the blog page to open? For many internet users in developing nations, such issues are serious considerations, given high internet prices, particularly when compared to generally low incomes.

As this paper indicated in 2016, internet prices in PNG were at that time considered to be among the highest in the world. In addition, internet services have often been unreliable and slow. In July 2018, the Australian government announced that it would construct a new undersea fibre optic internet cable between Sydney and Port Moresby. At the same time, the PNG government is constructing a domestic cable linking many of the provinces, funded through a loan from China’s EXIM Bank. The Kacific satellite was launched late in 2019 and aims to offer affordable internet access to remote and rural communities in countries like PNG. It is hoped that these initiatives and others will lead to increased bandwidth, improved reliability and decreased prices for consumers.

In places like PNG, internet users tend to use mobile phones, rather than laptop or desktop computers. The GSMA’s mobile connectivity index looks at pricing, as well as other factors such as infrastructure, content, ownership rates and user skills. It rates PNG’s mobile internet connectivity as better than neighbouring Solomon Islands, but poorer than other Pacific nations such as Vanuatu, Fiji, Samoa and Tonga. The index has data on 165 countries and PNG is ranked 121st, meaning there are 44 countries with weaker mobile internet connectivity and 120 countries performing better.

Typically, prepaid data bundles are purchased by mobile internet users in PNG. Capturing internet prices and trends over time can be tricky as the price per Megabyte (MB) can vary depending on the data bundle purchased. Usually, the cost per MB favours big spenders. An example of this pricing practice is shown in Figure 1, which shows the price per MB for data purchased by Telikom users in PNG in July 2018 (in blue) and August 2018 (in green). The figure shows that users who purchase larger bundles (that is, more MB) generally pay less per MB than those who purchase smaller amounts of data. 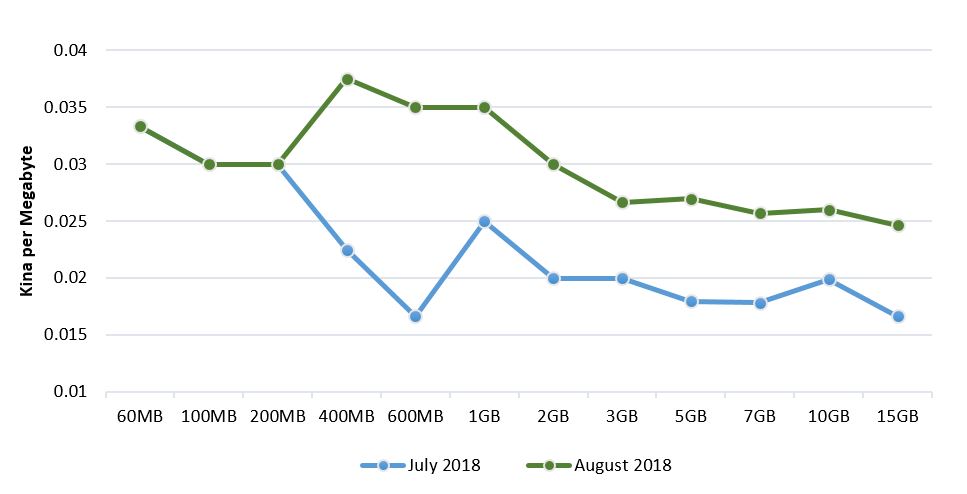 Thus, averaging prices is an imperfect method because of the wide variation in price per MB. Focusing on one type of data bundle may be a better way to look for trends over time. Figure 2 indicates the cost per MB of the largest bundles offered by the three mobile providers from June 2016 to the end of 2019. The low price offered by Digicel from December 2018 to February 2019 was a Christmas special. 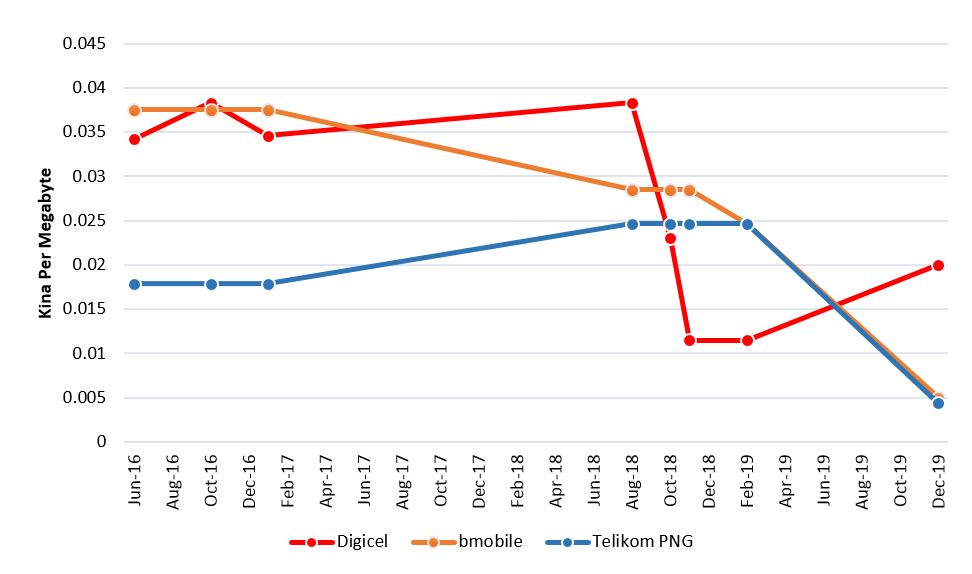 The figure suggests a decrease in the prices offered by Telikom and bmobile during 2019. Note that Telikom and bmobile are going through a process of merging and thus, going forward, their prices are expected to be similar or the same. It seems likely that a new mobile operator will enter the PNG market soon because the merger has freed up one licence. Indeed, the new player has already been issued with a bank of phone numbers to use (see this communication for more details).

Overall, this analysis suggests that the price of internet data can vary considerably, depending on the size of the data bundle purchased by the user, the provider, and the pricing regime in place at the time. It is important to note that the pricing data used for Figure 2 was collected inconsistently and through varied means, including the collection of newspaper advertisements, sporadic checks of the operator websites and anecdotal evidence from users. With the new internet cables coming online very soon, it is crucial to collect internet speed data in a more consistent, thorough and reliable manner in order to be able to undertake rigorous analysis of trends over time. Research with a suitable methodology and regular collection of consistent pricing data is commencing now.

Will internet prices in PNG decrease as predicted? What would this mean for people’s lives? Many people in PNG do not have access to electricity and some live outside of mobile network coverage. In a country with approximately 8 million people, there are 2.8 million active mobile phones, of which only 599,285 are smartphones. While internet price decreases would be welcomed by internet users, it is worth remembering that many people in PNG do not access the internet. Such people are unlikely to use the internet for some time to come, due to a range of factors such as remoteness, marginalisation, limited income, lack of electricity and illiteracy.

Anthropologist Robert Foster has written about consumer behaviour in PNG in the mobile phone era here and here. He has pointed out that personal discipline is a deliberate strategy employed by prepaid mobile phone users. If a user purchases a bundle with a limited amount of phone call minutes, a specific number of text messages or a set amount of data, they will be very careful to keep track of the balance and use the bundle wisely.

Interestingly, popular mobile phone network operator Digicel has offered free Facebook to its mobile phone users in various specials. At present, it offers Facebook use as part of its data bundles. For instance, the least costly one-day-long data bundle currently available to Digicel users in PNG is K1.50 for 20 MB (or roughly US$0.44 for 20 MB). A second option may in fact be considered to be better value for money by some users though, as it costs K3 (or US$0.88) for 65 MB plus a 335 MB ‘social pass’. Presumably the 335 MB can be used on any social media platform. In some packages though, the ‘extra’ credit is specifically limited only to Facebook. These promotions and pricing structures may be driving Facebook uptake. There are now roughly 750,000 Facebook users in PNG. These Facebook users might be pleased to know that there is a Devpolicy Facebook page where PNG-related blog posts are now being posted in full.

This blog post perhaps poses more questions than it answers. It is hoped that it provides some useful information and food for thought. Further work will be done on internet price trends in PNG and is expected to be published at a later date on this blog.