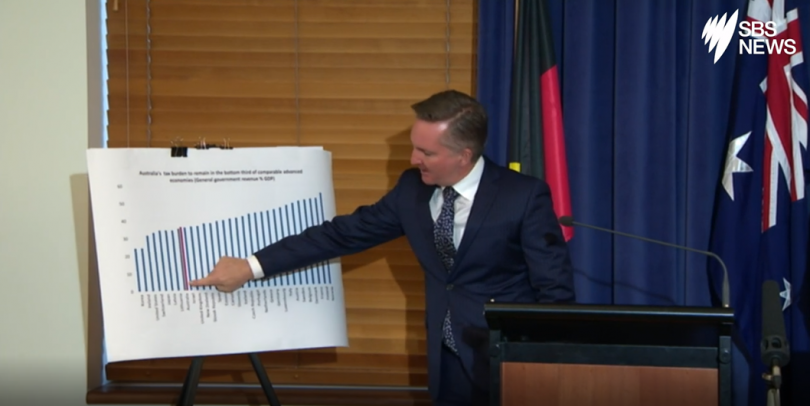 Labor surprised a lot of people by including aid spending commitments in their budget costings released a week ago. Penny Wong, and indeed the party’s election platform, had foreshadowed that “Labor will increase official development assistance as a percentage of gross national income every year, starting with our first budget.” However, it wasn’t clear that Labor would put a number on this objective. Now they have.

In my earlier blog, I laid out two interpretations of the Labor commitment: a strict (and reasonable) one and a minimalist one (which I argued stretched the meaning of the commitment unreasonably, but which was interesting as a lower bound on what it might mean). In terms of the numbers, the announcement comes out almost exactly halfway between the two. The minimalist interpretation (which would have stabilised aid/GNI from the first Labor budget of 2020-21) would have cost $1.1 billion to 2022-23 (the year to which the budget costings run). The strict interpretation (which would have increased aid/GNI by 0.01 percentage points – the units in which this ratio is measured – from 2020-21) would have cost $2.2 billion to 2022-23. The actual announced commitment comes in at $1.7 billion.

When we look at the trajectory of aid though, the announcement seems much closer to the minimalist interpretation. It essentially fixes aid to GNI at just above 0.21% of GNI. 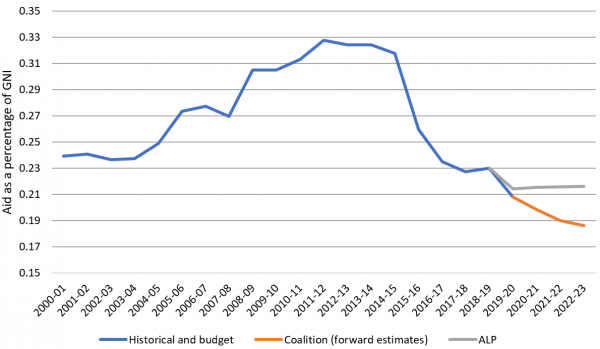 Labor Shadow Treasurer Chris Bowen’s reason for not doing more is that DFAT couldn’t handle it: “The infrastructure of aid delivery has been diminished. It would be irresponsible, even if we could afford it, to throw money back into aid without the infrastructure, which has been whittled away under this government.” While there is some truth in this critique, as a justification for not doing more it is disingenuous. Whatever the deficiencies of DFAT, Labor has adopted a policy of increasing the aid/GNI ratio, year-on-year. The costing is consistent with a policy to stabilise aid/GNI, not increase it.

That said, everyone will be so relieved that the downward trajectory of aid has been halted that Labor is unlikely to be pressed for any additional money – at least, if elected, for the first few years.

What will/should the money be spent on?

71% of the Labor’s additional $1.66 billion (some $1.2 billion) is unallocated. The rest goes to fund various commitments announced over the years. The biggest of these, $380 million or 23% of the total, is for UNHCR. The remaining 6% is spread over a number of much smaller initiatives: 1% ($10m) for the Rohingya; 2% ($32 m) for NGOs; and the same amount again for a Pacific blindness initiative. Intriguingly, $3 million is set aside for “independent oversight for Australian-funded facilities” and another $4 million for an “independent children’s advocate.”

In the short term, the aid program is massively over-committed, and the funds would be well-spent rescuing those programs which have just been cut, such as Pakistan which has just been halved.

Perhaps a couple of years in, Labor might be ready to try something bold. I wouldn’t suggest expanding our bilateral aid program to Africa, but joining the African Development Bank was something we almost did the last time Labor was in power. Back in 2013, Robin Davies and Joel Negin articulated a very powerful case for joining the AfDB, noting that we were the only sizeable OECD donor not to be a member. With some fresh money on the table, theirs is one of a few blogs from earlier days that bear re-reading.

A revised spreadsheet from my earlier blog with the recently announced ALP aid commitments added is available here.