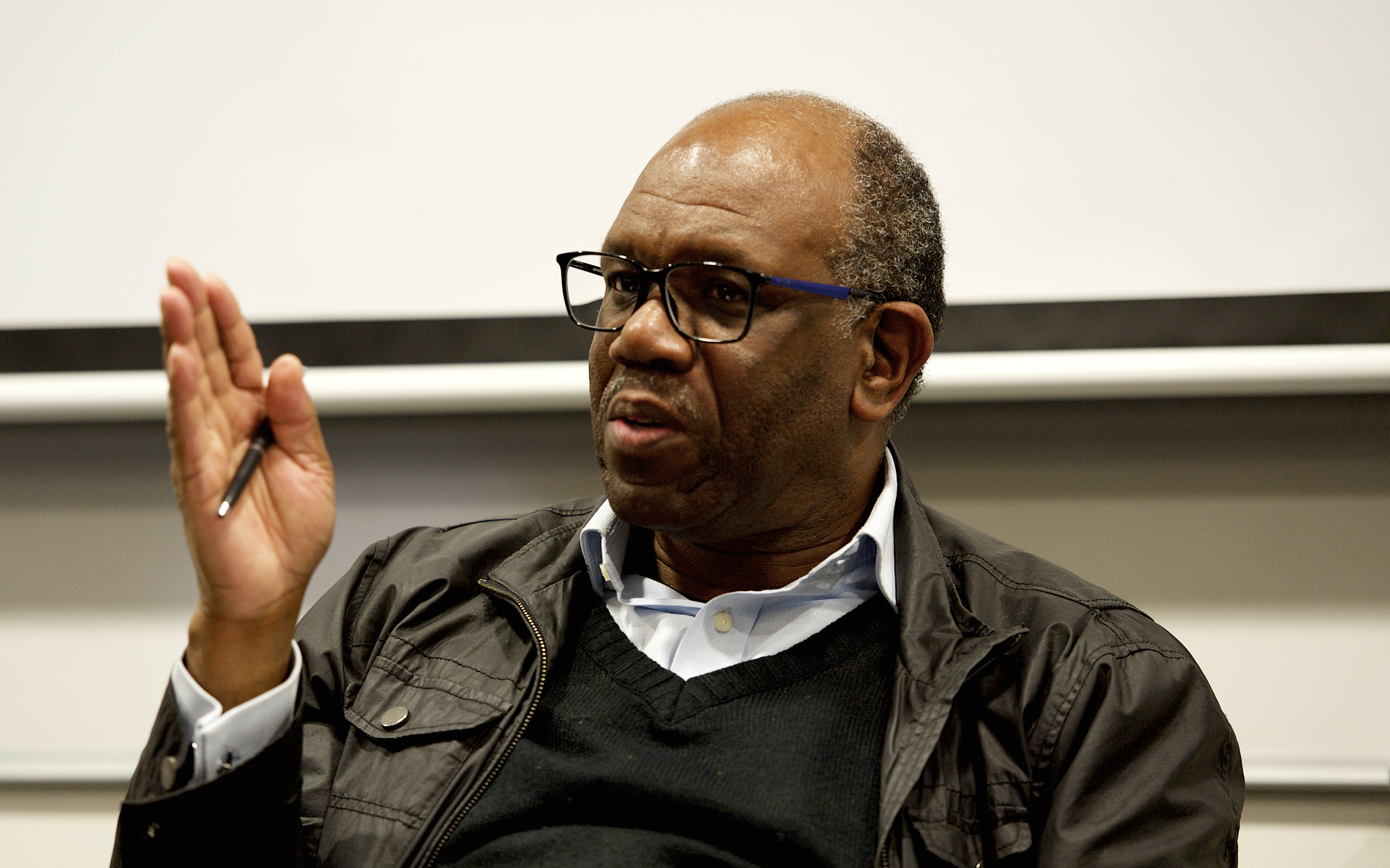 A widely respected theologian and commentator on faith and social issues, the Reverend Dr Joel Edwards is the former International Director of Micah Challenge, a global Christian response to extreme poverty. Following a panel discussion in Canberra sponsored by the Campaign for Australian Aid, he sat down with Camilla Burkot to talk about foreign aid in the UK context, politics, and the importance of getting narratives right. You can listen to the podcast here [17 mins] and read the full transcript here [pdf]. For a summary of their discussion, read on.

About two years ago the UK became the first G8 country to reach the 0.7 per cent of GNI target for giving aid; that commitment became a law earlier this year. I began by asking about this legislation, and what difference it will make.

The legislation is an expression of a very long journey, which has been going on in the UK for the last 30 years, of massive public campaigns. LiveAid, Jubilee 2000, Make Poverty History – all these have led to where we are now.

What difference will it make? It tells the British people that there is good leadership on this issue. I think the British government is beginning to see that there is a joined-up policy to be pursued between insecurities in other parts of the world and security for the British people, between more sustainable economic development in other parts of the world and Britain’s ability to trade with, for example, India. There is a kind of political common sense prevailing.

While preparing for this interview, I came across an illuminating quote from David Cameron from 2013, just before the G8 Summit: ‘Fortune favours Britain when we’re ambitious, when we count, when we play our part in the world. And we have been playing our part. We made the decision to protect the aid budget because I believe this commitment is in Britain’s long-term interests’. It is very clear about globalisation, economic interconnectedness, and security as justifications for aid. But where does the moral argument for aid come in – or do we even need it anymore?

I think we do need it. I think two things are tucked away in David Cameron’s statement. One is an aspiration to be a global leader, and Britain has been very serious about recovering its global consciousness and leadership role. Blair and Brown definitely positioned themselves as global leaders, and indeed Clare Short, who was International Development Secretary – they were passionate about the global scene, and I think that’s carried through into the present administration.

The second is what I call ‘legitimate self-interest’. I don’t think that there is any barrier between morality and legitimate self-interest. As a Christian leader, I would say ‘Love your neighbour but as yourself’, as Jesus said, is great for policy. There is a morality in recognising that people are interested in their own future and security, and that of their children, and by extension to the future reciprocation in other parts of the world. So a safer world is a better world for me, and that’s legitimate. That’s very different from a selfishness which says, ‘we’re going to protect our borders, we’re going to play amongst ourselves and seek what’s good for us, and we couldn’t care less about anybody else’. Whether that’s internal politics or international politics, that’s bad politics.

I then asked Rev Edwards to reflect on the role of advocacy and civil society leading up to the 0.7 per cent commitment.

I was there, kind of mesmerised, in the height of the Jubilee Campaign. When you have people like Ann Pettifor heading up a campaign like that – taking what is essentially a biblical concept of freedom, and applying that to 43 highly indebted countries – and gaining massive public traction, drawing in governments… I remember being a part of quarterly breakfast meetings between Gordon Brown and Clare Short, the Treasurer and the International Development Secretary, meeting with NGOs to talk about these issues. Now that was unprecedented.

If you underlay that with the development of the MDGs and this new language about dealing with extreme poverty, that was a very powerful concoction. Educating public opinion, campaigning and trying to mobilise individuals to hassle their politicians, I think, has been a very important part of the British government’s decision to protect overseas aid. This is a kind of pincer movement – you go for your politicians but you also advocate at the grassroots level.

I remarked that, while in some respects there may have been a kind of ‘perfect storm’ in the UK, the significant contributions made by advocates and activists there suggests there is hope for Australian aid campaigners.

There is hope, there is hope. I think if we can get the narrative right about the positive impact of aid, if we can dispel some of the myths that these ‘dishonest African nations are getting, you know, trillions of dollars in aid, and are so corrupt’. And actually put that in perspective, to say, ‘no, most of these places are losing money through corruption, it’s not just from bad governance, but from multinational dishonesty’, which comes back to rich nations – and that the amount of aid they get is not 7.0, but 0.7! If we can really sort out those kind of narratives, I think there is hope that we can perhaps begin to see a real sea change.

I think also to challenge our leaders – and in the Australian context this is quite important – to challenge leadership to be global in its perspective and its politics, not protective of its borders in terms of the principal political drive. As an outsider that is what I see missing in Australian politics.

Speaking of narratives, I noted that a common argument against aid is, ‘there are people in our own country who need help – we shouldn’t be spending money overseas when there is poverty in our own communities’.

It’s not either-or. There is a real sense that charity begins at home before it can spread abroad, and so one always has to ensure that your policies have domestic justice applied to them. But it must do in a democracy: if it doesn’t you don’t survive, and governments know that. So I think nobody is pretending that there are not two million children in the UK who are technically described as living in poverty; that’s bad. Charities giving food to people in the UK; that’s crazy, that’s bad. And we have got to raise our voices against those things.

But we must not lose sight of the fact that there is no comparison between someone in the UK who is described as poor, and somebody in Africa or Asia living on less than $1.25 per day in extreme poverty. And that there are 60 million displaced peoples around the world and that we must have some kind of responsibility towards them. To use the domestic, relative poverty at home as an excuse for doing very little or nothing abroad is unreal politics, and it’s immoral.

Finally, returning to the UK’s 0.7 per cent commitment: will it stick long-term?

I think it will stick to the extent that we really get the narrative right, that we can have honest debates and understand proportionally what poverty is for us in the UK, and what it means for someone in sub-Saharan Africa. I hope it will stick as the legitimate self-interest becomes clearer, that poverty and insecurity elsewhere affects us.

At the moment we are experiencing real difficulties in terms of immigrants coming in through the Channel Tunnel. That can go in one of two ways; it could either lead to higher levels of intolerance and therefore put aid under pressure inadvertently, or it could open the eyes of the British people to say, ‘You know what? We really are a part of a hurting world and therefore what we are proposing in 11.8 billion pounds per annum for overseas aid really is not disproportionate to the pain being felt there and the effects it is having on us’.

If we can really begin to make those arguments, and show that yes, the aid we have given has made a difference, and more of that leads to a better world, which leads to more security for us, I think it will stick. It all depends on how well we do the narrative.

The Rev Dr Joel Edwards is the former International Director of Micah Challenge. Camilla Burkot is a Research Officer at the Development Policy Centre.

The Reverend Dr Joel Edwards is the former International Director of Micah Challenge, a global Christian response to extreme poverty.