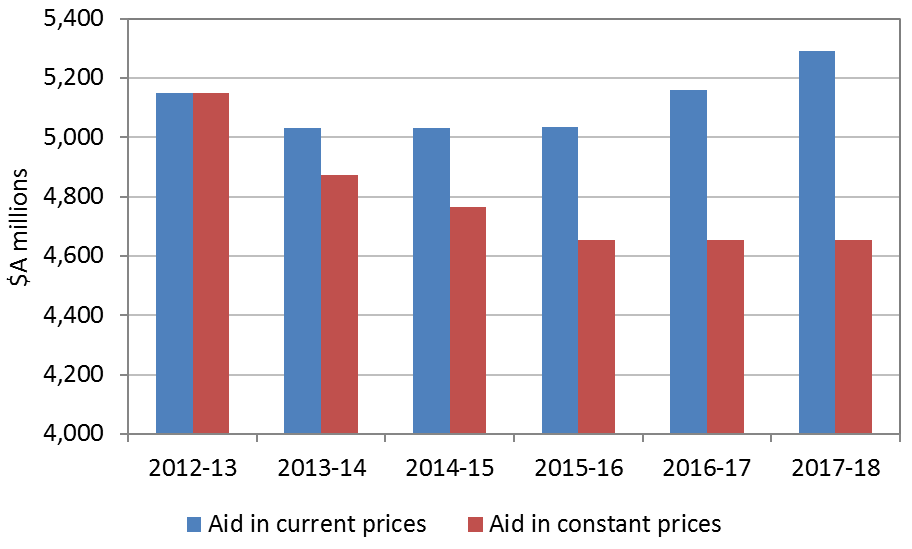 Going in to the 2013 elections, the Coalition promised that it would deliver “annual increases in nominal funding in the aid budget” in line with increases in inflation. Their costed aid savings meant, we calculated, that aid in 2016-17 would be at 2012-13 levels after adjusting for inflation.

Though a very significant cut, it is not unprecedented. Costello cut aid by 9% in real terms in his first budget in 1996, and then by 1% the following year, but the Coalition did then start to increase aid and began the scale-up which subsequently drove aid budgets to record levels. There is no such plan in the current budget. After 2015-16, aid will simply be held at its then real level. The cuts will not be made good.

Whatever one thinks of this strategy, there is no doubt we are now in a new era, where aid is scaling down rather than up. Since aid itself is heading south in real terms, the ratio of aid to both total expenditure and to GNI must be heading in the same direction. Indeed, as the figure below shows, by the end of the forward estimates both these ratios will be back at the level they were at in 2005-06.

Note: This figure has been updated with revised GNI numbers. All figures, working, and sources can be found in this spreadsheet (.xlsx),

What about the quality of the aid spend? Since the overall aid budget is being kept constant in nominal terms between 2013-14 and 2014-15, any increases in particular areas have to be offset by savings elsewhere. There are three major sources of savings:

Thus the $595 million of savings are approximately expensed by these $590 million of additional spending. They are a mixed bag. Most would welcome the release of the asylum seeker funding, the increased commitment to humanitarian aid, and the enhanced regional focus. But whether this generosity to regional organisations is justified, and whether the administrative savings go too far are matters that can be debated. The increase in aid to PNG is hard to justify, and there’s simply no information to judge the biggest increase of all in cross regional programs, though we might know more soon – more on this below.

There are other small increases and decreases such as another $11 million to double the amount of the aid program (the Direct Aid Program) which sits at the discretion of Heads of Mission. But lots of things don’t change very much, including commitments to NGOs, and, overall, to multilaterals.

And that’s about it. There is not a lot of information on aid in this year’s budget. There is no aid “Blue Book”, as there has been at least since 2001-02. Why the Blue Book, which was good enough for Downer and Howard, has been done away with has not been explained. There is some information posted on the DFAT budget page and on existing aid country web sites, and there is some extra information in the main budget documents, but there has no doubt been a big net information loss compared to earlier budgets. Go the aid website to see how much we are spending on multilaterals, and you’ll find a 2011-12 figure. Try to find out how much is being given through the ANCP program for Australian NGOs and you’ll find a 2012-13 figure. Figures on how much other government departments are spending are mainly only available in aggregate.

And don’t try to look for sectoral information. ODA by sectoral spend is simply not provided. This awaits the release of the Government’s aid policy and new benchmarks “in the coming weeks” –  and will no doubt be accompanied by some new initiatives to expense some of that $380 million currently parked under cross regional programs.

For a government which promised to enhance aid transparency and to protect the real value of aid, it is a discouraging beginning.